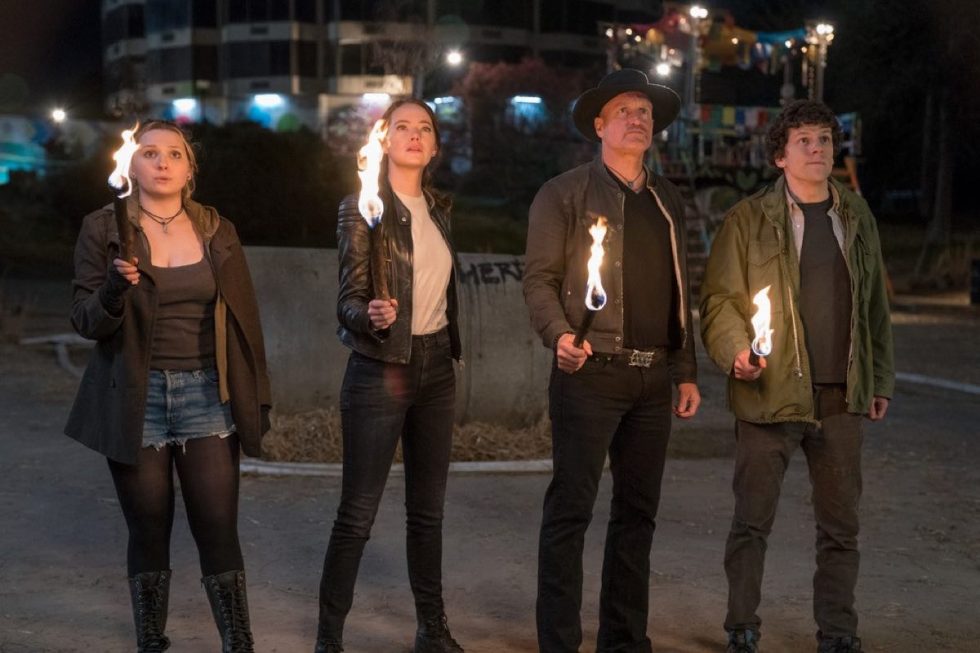 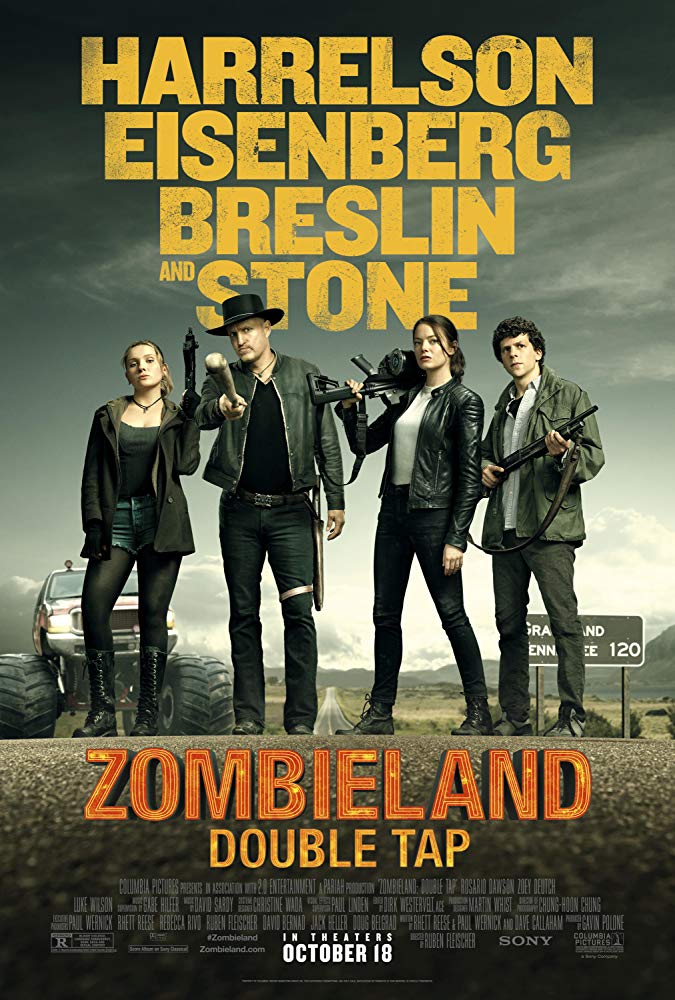 I don’t know what I was expecting, from Zombieland: Double Tap as I hadn’t seen Zombieland (2009), and I’m not one to mix comedy with horror. I’m not a purist, but I’ve seen horror-comedy done poorly, and it’s Halloween after all. Here, I throw my hands up and cry pardon. I was wrong to doubt this movie, and it’s rare for a sequel to make me want to see its predecessor. I’m all in for doubling back (see what I did there?).

Columbus (Jesse Eisenberg), Tallahassee (Woody Harrelson), Wichita (Emma Stone), and Little Rock (Abigail Breslin) have settled into a comfortable life in a post-apocalyptic world ravaged by zombies. Columbus and Wichita try the exclusive companion routine, Tallahasse is literally carving out a place of his own, but Little Rock is restless for someone her own age she can connect with. It’s shortlived domestic bliss and when wanderlust strikes at the heart of the team, they scatter. Columbus and Tallahassee meet Madison (Zoey Deutch), whether that’s her actual name or her city, she probably couldn’t tell you because she’s about as deep as a sidewalk puddle, if genuinely sweet-natured. If hell is populated by other people, there are several dozen of her waiting for all of us. Little Rock hooks up with Berkley (Avan Jogia) a drifting hippie musician all about the free love and freer pot on his way to mythical gun-free Babylon, said to be populated by free spirits, happiness, and people her own age. Tallahassee is on a quest of his own to find Graceland and instead meets Nevada (Rosario Dawson), who might just be the happily ever after he’s been looking for.

Yes, there are plenty of zombies in Zombieland: Double Tap, now broken out into three categories and an endless supply of ammo and gas. If these are the things that keep you from enjoying this ridiculously fun and funny movie, I don’t know if we can be friends. There is a crazy amount of action and with a runtime of 99 minutes, it’s the perfect length for a movie where lots of people die. You don’t need a lot of dialogue for what’s happening, but what there is, is smart and funny. It’s a horror movie that allows the comedy and action to be natural – yes even the zombie-fighting scenes and over-the-top gore. I enjoyed the rigidity of Columbus and his lists, the hard-edged simple survival of Tallahassee, and especially enjoyed how neither Wichita nor Little Rock needed saving. I see a lot of movies where the strong women characters find themselves in stupid situations where they can’t get out of their own way, and even with Little Rock’s vanishing act, it was clear she could handle her own.

I loved the little visual sidebars that kept the eyes moving across the screen, and there was a running joke about Tallahassee needing to ride around in a manly vehicle more suited to his natural inclinations of spitting and shooting. Everything about Zombieland: Double Tap was fun and delightful for a movie I almost gave a hard-pass.

Zombieland: Double Tap is streaming now on the following services:
Powered by JustWatch