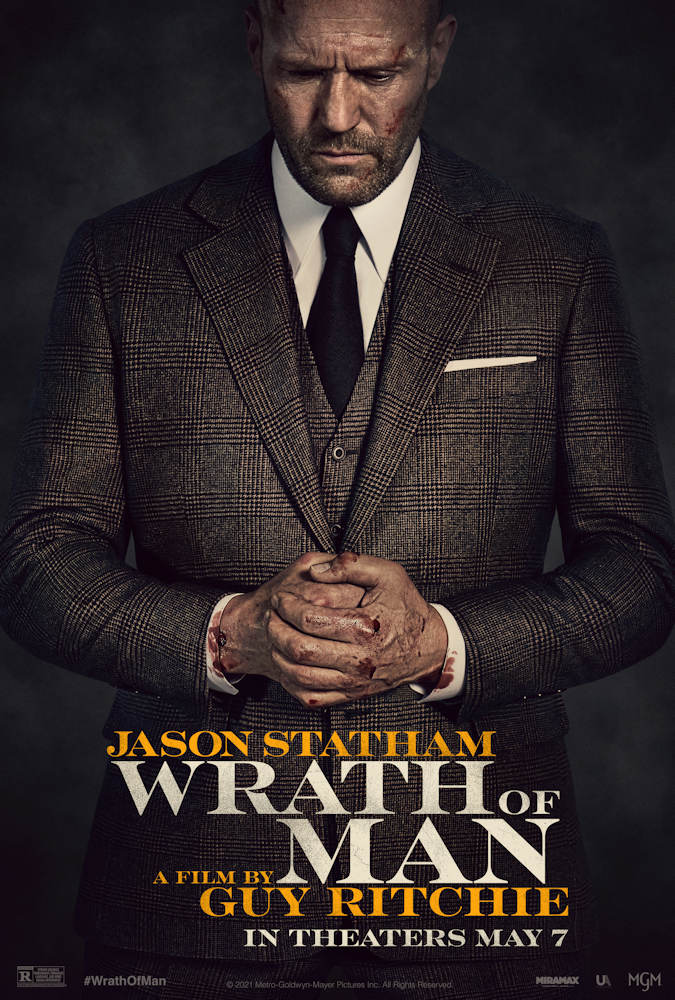 The Wrath of Man (2021) is a Guy Ritchie film, so it’s not like you have to think too hard about what’s happening, except a plot actually happens. Don’t worry – it gets loud, so you know you haven’t lost your place.

H (Jason Statham) is a new hire/armed muscle for a private armored car or “cash truck” company, Fortico. He’s quiet, brooding, and hiding his incredible shining talent for killing things under a bushel. He barely squeaks by on his proficiency tests and he’s not really trusted among his peers, but in short order, he proves his worth as a dedicated team member who can dispatch the armed robbers who hit the company on a regular basis, even if it violates all sorts of company rules and assorted laws. Keeping a weathered eye on his teammates, Bullet (Holt McCallany), Dana (Niamh Algar), and Dave (Josh Harnett), it’s obvious from the jump H is looking for someone specific and his new workmates make for a laundry list of shady characters.

As his past unfolds through sliding flashbacks we learn H’s motivations and, in time, the source of his ire – another cash truck robbing gang operating with military precision with a wild card (Scott Eastwood) on their team. There’s an inside man at Fortico working for Jackson (Jeffrey Donovan) and his band of bored and underpaid ex-military colleagues. They’re robbing cash trucks because it’s something to do, to give their lives excitement, and they work their way up to bigger and bigger hits so they can retire and take care of their families – the goal of all criminals is a comfortable life and a college fund for their kids. Getting to the inside man is H’s priority as he works his way first through the City’s elite scumbags and then undercover at Fortico. H means to flush the baddies out with extreme prejudice. Nabbing the whole gang responsible for his recent tragedy – and I mean so recent it strains at the edges of credibility – is his ultimate goal.

There’s also a thin storyline involving the Feds (Andy Garcia), which is only mildly interesting, but it’s mostly throwaway to explain the lack of real heat on H.

Wrath of Man had more of a plot and storyline than I was anticipating, which seems like I’m selling it short considering I enjoyed The Gentleman (2019) which has many of the same plot beats. You may not know precisely how the movie will play out, and that’s okay because it’s not there to make you think, but it’s heavier than your standard popcorn fare. The pieces are interlocking and what doesn’t make sense 10 minutes in will become integral 30 minutes later. The exposition and action flow make for a smooth ride, and neither get too intense or drawn out. It’s not a “dumb action movie” and I’ve always enjoyed Ritchie’s ability to make a firefight look more plausible than cartoonish. Wrath of Man is quick with its violence and it doesn’t dwell on the gore because showing viscera isn’t the point. Statham is the point so all eyes are on him.

Downsides – Statham is the point so all eyes are on him. This isn’t a grieving man who lends himself to emotion, because like the anti-hero in all revenge movies, that slice of humanity has been brutally carved away. He is a man now chiseled from stone, not prone to smiling or jokes, just steely glares and one-liners, but for those one-liners to make an impact we need to hear them. Statham mumbles through most of his dialogue and maybe it’s because I’m getting older and my hearing isn’t what it used to be, but Wrath of Man could have used a healthy dose of ADR and post-production cleanup. Perhaps it was just my screening copy, but some of the edits were not as smooth and a few scene transitions were choppy. Some of the flashback scenes that lead up to the final standoff don’t make a ton of sense, even when you see them twice, as is Ritchie’s way of revisiting key moments.

And of course, the Feds, the forever babysitters and cleanup crew of violent organized crime so long as the criminals don’t use civilians as collateral damage. I don’t know how true that trope is, but it wasn’t used to its fullest. Guys in suits aren’t the foreboding Casandra they used to be, and here they’re mostly used as well-dressed janitors.

I didn’t hate Wrath of Man, which is all you really care about, right? I was interested in the story, I was vested in both Jackson’s and H’s storylines, I love seeing Holt McCallany out of a suit, and the carefully thought-out precision of the operations and backup plans is always fun to watch. It’s a better-than-average action movie that will appear much bigger than life on a theater screen if that’s how you choose to watch it but will be just as satisfying on the small screen on your couch.

Wrath of Man (2021) is Rated R for swears, and lots and lots of gunplay. People get shot a lot.