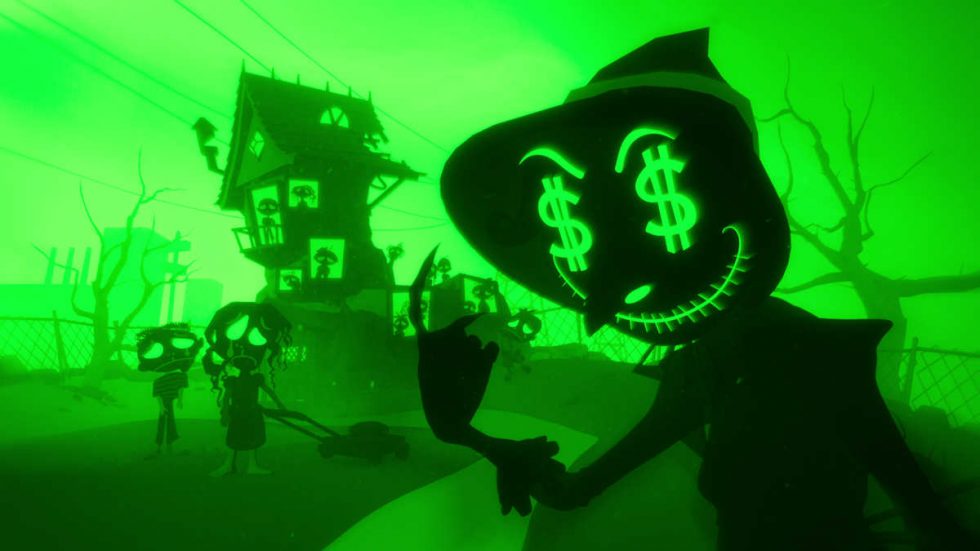 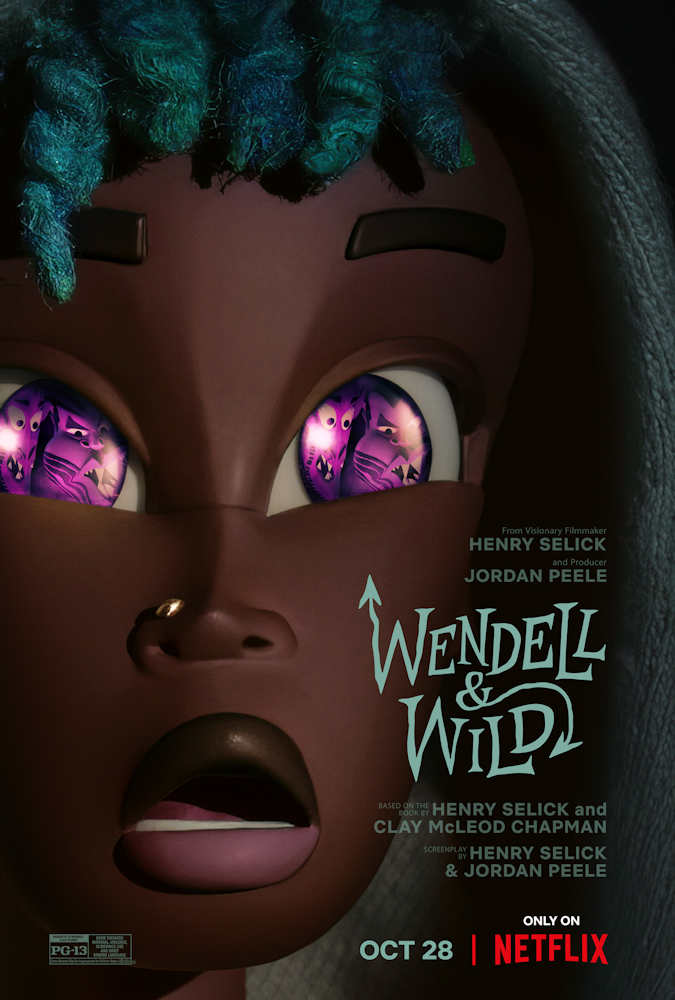 Wendell and Wild (2022) has all of the makings of a terrifying self-reflective stor,y but its uneven characters and inconsistent beats drag fun-inclusive shenanigans to a crawl.

Billed as a horror-comedy, Wendell and Wild starts with the usual childhood trauma as inciting incident premise. When we catch up with Kat (Lyric Ross), it’s five years later, and much like herself, her hometown is crumbling and is a disenfranchised shell of its formerly vibrant self. She’s being shipped off to Rust Bank Catholic School for Girls as a second chance to turn her life around. What has she done? We have no idea, but we can assume it was short of murder if she’s being put into the general population of Catholic school girls. It’s not that kind of movie.

She refuses to fit in and settles for being an emo-goth hardcase who must buck the system by being rude and unmanageable to literally everyone. She even refuses goat yoga. One day she’s bitten by an octopus, revealing that she has a connection to the Underworld. Our Kat is a Hellmaiden.

And we never learn what that means.

Meanwhile, low-level demon brothers Wendell (Keegan-Michael Key) and Wild (Jordan Peele) work hard to escape the underworld, where they’re barely employed inserting hair plugs into head demon Buffalo Belzer (Ving Rhames). Belzer runs an amusement park for tortured souls on his belly. They use the hair cream as a meditative lubricant to contact The Land of the Living so they can get summoned topside to build their own amusement park without direct competition.

Do you see how none of that made sense? There’s another 60 minutes to go, so buckle up.

There’s an evil, possessed teddy bear (Bearz-a-bub), a reanimated priest, a mad scientist janitor in the basement that collects demons, and a demonic nun (sure).

In a Catholic School.

Okay, I went to Catholic school so I can totally see that last bit.

Part “lighten up, Kat” and part “prisons are bad”, we can be grateful there are no musical numbers.

I get that it’s supposed to be silly and nonsensical, but so many of these story threads never connect. For a movie about two demons, it should have had more of those two demons. Neither Wendell nor Wild have much to their characters except wisecracks and a devoted lack of motivation, and once in the Land of the Living, they become pawns instead of plot-points. This could have easily been called, “When Kat Got Her Groove Back”, but maybe Angela Bassett who plays Sister Helly decided that was a step too far.

Wendell and Wild touches on gentrification and the privatized prison complex, by which I mean it takes a heavy hand and beats you in the face with it. It also drives by loss, grief, isolation and the dangers of not having a Plan B (an actual plan, not the medication, this *is* a kid’s movie). Overall, it was a lot to cram into a 105-minute film for kids and I don’t think much of it lands.

Everything about Wendell & Wild wants to say, be yourself and eventually everyone will embrace your weird persona, except Kat was never an outcast at RBCS. Everyone wants to be her friend and make her feel welcome, but she carries this chip on her shoulder that creates an overall unsympathetic vibe. She makes it her business to be disliked. Even Raul (Sam Zelaya), who works the hardest to be her friend, often gets cut off and ignored. It’s one thing to go for a message of inclusivity. It’s entirely another to allow what amounts to bullying to form the hallmarks of a friendship.

I get the feeling that whatever story director Henry Selick’s unpublished storybook for kids wanted to tell, not much of it made it to the screen.

Jumble of a story aside, no one does stop-animation like Henry Selick. The colors are vibrant, especially the green in Kat’s hair, and the characters’ faces are very expressive. It’s a visual treat with a lot going on in the background without being frenetic. I wasn’t thrilled by some of the music choices, but if you’re a fan of Afro-punk, then maybe “You Sexy Thang” by Hot Chocolate is completely appropriate for a kid’s film. What do I know, I don’t review music.

If you’re looking for something more linear and deeply disturbing like Coraline (1999), you won’t find it here. Wendell and Wild is more of the harmless dark fantasy scary with a few mixed messages thrown in for good measure.

Wendell and Wild is streaming now on the following services:
Powered by JustWatch