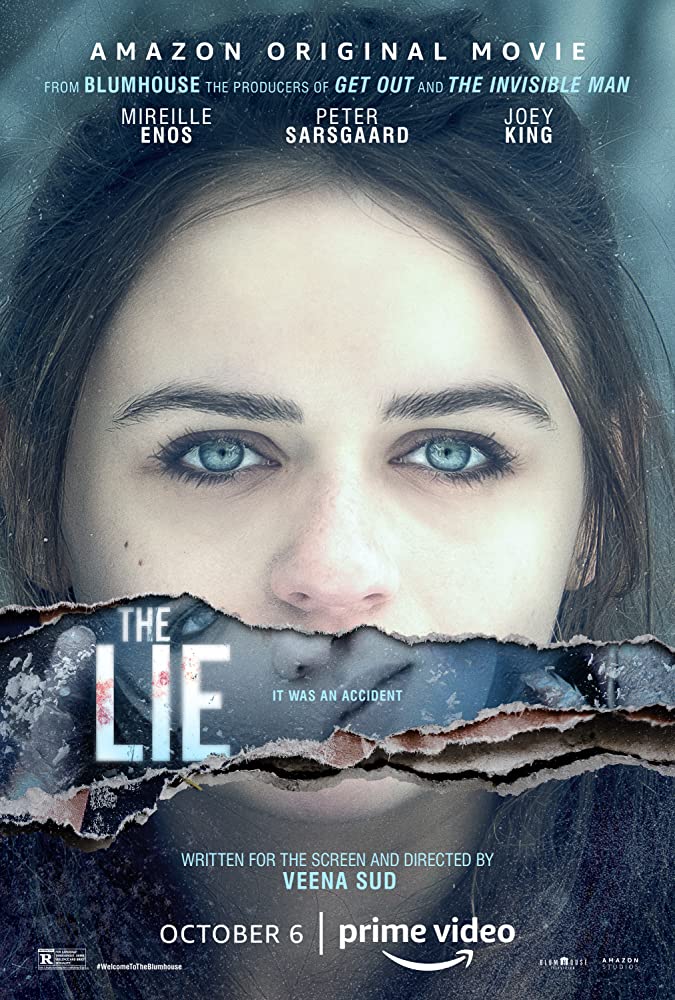 I would imagine that under any other circumstance, in any other timeline, The Lie (2018) wouldn’t come off so unaware. As a story in this modern time, with literally everything going on, it’s tone-deaf. As part of the opening volley of Amazon Prime’s exclusive “Welcome to the Blumhouse”, Jason Blum’s sincere attempt to bring underheard and undiscovered voices to the mainstream, The Lie attempts to ask, how far would you go to protect your child?

The answer, unfortunately, is not far enough especially not using the sense God gave a squirrel.
Kayla (Joey King) is stuck in the middle of her divorced parents, craving attention and doing everything wrong to get it. Jay (Peter Sarsgaard) is aloof and chasing his dream of being a rockstar, and Rebecca (Mireille Enos) is a corporate lawyer who is tired of always having the be the adult. During Jay’s weekend, he’s to take Kayla to ballet camp (in the middle of winter, outside of the City), which is a drive somewhere through lots of snow (*shrug*). Along the way, they pick up Kayla’s friend, Britney (Devery Jacobs) who has had a fight with her dad and is waiting along a desolate road to take the bus (sure). During an improbably ridiculous side trip, a Bad Thing happens and Britney is lost, presumed dead. Kayla says she did it, complete with panic attacks and vomiting, and thus begins what I can only describe as White People Doing Unnecessary Overcomplicated Nonsense Since Forever To Avoid Consequences.

As beautifully shot as this movie, and there are some absolutely gorgeous angles in The Lie, it’s not very good. There isn’t a single sympathetic character in the bunch. First, you have Kayla, a ballet dancer with crippling asthma. She’s hysterical, snotty, and a brat and always on the verge of tears. Her mother openly opines there might be “something wrong” with her while she wats popcorn and happily watches cartoons after committing a heinous act. Everything for Kayla seems to trigger a vomit-including panic attack resulting in several tugs on the inhaler (a weekend ballet retreat isn’t going to fix that). Jay is freewheeling and enjoying his second childhood in a band with a hot redhead. He’s chronically late, emotionally distant, and while he loves his ex-wife and daughter, they’re totally harshing his image. I mean, his daughter’s friend goes missing and he doesn’t call the cops because the band has practice. We can see where Kayla gets her probable psychopathy from. Rebecca got the house and everything is clean lines and objet d’art. She just wants everyone to work for a change without making everything so difficult. For a corporate lawyer who should be all hard edges and take no prisoners attitude, there’s not much “there” there. They’re both really bad at parenting, adulting, and being responsible humans overall.

At the heart of The Lie is the disappearance and presumed murder of Kayla’s friend. Instead of doing the right thing at every possible opportunity, this family manages to do exactly the opposite. Friend goes missing and instead of calling the ops, they pretend they never saw her. When they get caught in one lie, they make up four more they can’t keep track of. At one point, Rebecca and Jay are burying the missing girl’s phone ON HER OWN PROPERTY and then attempt to drive away, when they only live a few houses down. It leads to the first of two unbelievable climaxes, that could only have been set up unnecessarily by driving a few houses. They cast blame to Sam (Cas Anvar) the father of missing Britney, who is inexplicably “Pakistani” which seems to give the filmmakers license to toss in a little unnecessary racism. Apparently, White men would never believably be accused of murdering their daughters, right? As things spiral out of control, any rational human being can point to one of a dozen things they did wrong and it’s not any fun to watch.

This film is infuriating from beginning to end. Affluent White parents try to shield their daughter from the consequences of her actions by callously ignoring how their actions affect everyone else, including the victim’s family. Based on the German film, Wir Monster (2015), which I haven’t seen, so I can’t tell if something is lost in the translation about personal responsibility and how we raise our young people, or if the original is just as irredeemable. If The Lie is supposed to be a social commentary on how the affluent are just “different”, it missed the mark. With every decision Rebecca and Jay make, coupled with Kayla’s own astoundingly poor judgment, The Lie devolves into so much less a cautionary tale, than a beautifully shot half-remembered fever dream full of really awful people with no common sense.

The Lie (2018) is part of Amazon Prime’s “Welcome to the Blumhouse” program and is Rated R for swears, people vomiting, people getting punched, car accidents, people left to die, and blood in places you’ll never completely reach.

The Lie is streaming now on the following services:
Powered by JustWatch