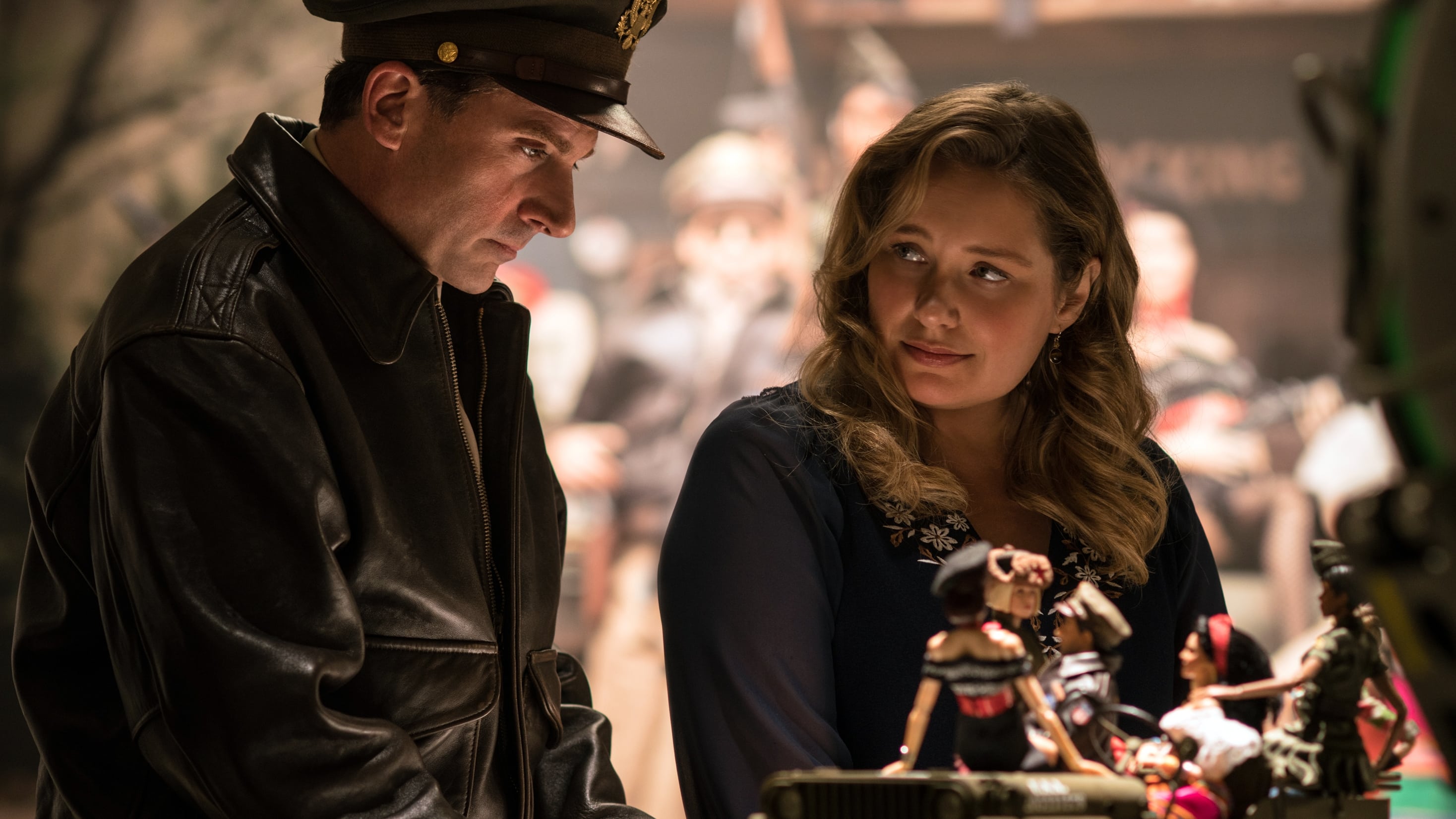 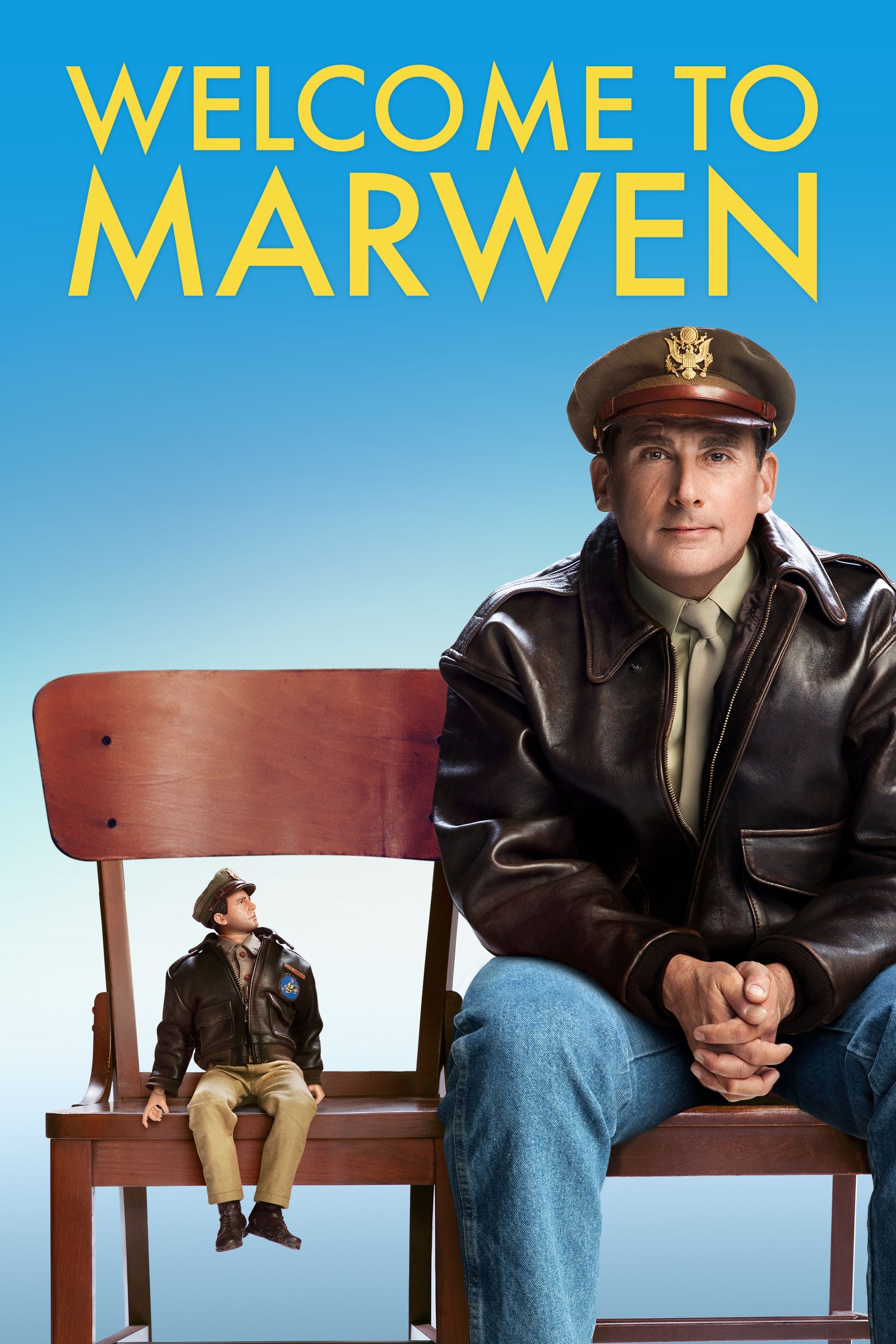 Welcome to Marwen (2018) reminds me a little of Lars and the Real Girl (2007), where a man who’s clearly living on the margins of what is considered polite society, is fully accepted by his town in spite of his quirks. The bar where he works has a special ramp made for his emotional support toy jeep, and the townswomen know and accept their unorthodox roles in his escape and ongoing if lucrative recovery. Mark Hogancamp (Steve Carell) suffered a devastating attack which left him with severe memory loss, the inability to continue his profession of illustrator creating a disconnectedness with the world around him. Mark turns to photography and creates Marwen, Belgium, a fictional town during WWII in 1:6 scale he populates with a heroic take no prisoners version of himself as well as people, mostly the women. They’re all badasses too, defending their town from Nazis who never seem to die. They fight, rescue him, feed him, and protect him. They are “Hoagie’s” shield, and by extension, Mark’s. The women of Marwen (played by Janelle Monáe, Merritt Wever, Gwendoline Christie, Leslie Zemeckis, and Eiza González) and Hoagie travel in a military jeep pulled by a long stick.

In real life, Mark has an upcoming sentencing date for the men who nearly killed him, but he’s so crippled by fear and PTSD the very thought is paralyzing and he waffles about going. The story flips between Mark’s crippling real-life drama with trauma, addiction and codependency,  and the animated town of Marwen where Hoagie’s feelings for Mark’s new neighbor, Nicol (Leslie Mann) are explored as much as his fractured mind will let him. He’s plagued with not only his oldest memories, which are unfortunately the attack, but by the Belgium Witch, Deja Thoris (Diane Kruger) – a blue-haired single-glove wearing frenemy who seems to want to destroy everything happy in Mark and Hoagie’s life.

Mark is a difficult character to connect with because of his fixations on a woman’s essence (something that means something completely different to him) and he celebrates their strengths by celebrating their womanhood,  bringing out their strongest and most vulnerable qualities. You can be a strong strong woman and still dress in combat skirts stilettos and peasant tops. Off of this to say, Mark is a very complicated character and you may not like every element bits of the story. Based on a real person, the real Hogancamp has problems and social issues that could be better explored with a documentary (hey, there was one) but that’s not what this Welcome to Marwen is.

I suspect folks that don’t like Welcome to Marwen may fall into two camps – fans of the documentary (which I didn’t see) and those really having a hard time sympathizing with a man who really loves women’s shoes. There are shades of Vertigo (1960) where after a trauma the main character shapes the world around him into his own ideal, and as individualized therapy, and frankly, this fictionalized account isn’t looking for your judgment.

I’m bucking the trend of naysayers by saying I liked Welcome to Marwen. I loved the real to life doll scenes, found “doll “Hoagie” particularly handsome, reveled in the doll animation, and despaired over Mark’s inability to cope with life. I was touched by the sympathetic characters that rallied around Hogancamp after his accident, the disturbingly realistic portrayals of deep depression, addiction, and severe PTSD and schizophrenia. I did not see Steve Carell’s Hogancamp is “creepy” as he fixates on the women he can’t have by making them dolls.

If you can get past pretending all good guys have to be perfect and not just “Hollywood broken” I think you’ll enjoy Welcome to Marwen, too.

Welcome to Marwen (2018) is rated PG-13 for toy planes getting shot down, Mark’s remembrances of getting the crap beat out of him, Dolls getting shot, Dolls bleeding, Dolls falling on fences, Mark over-medicating, and Dolls making out.

Welcome to Marwen is streaming now on the following services:
Powered by JustWatch