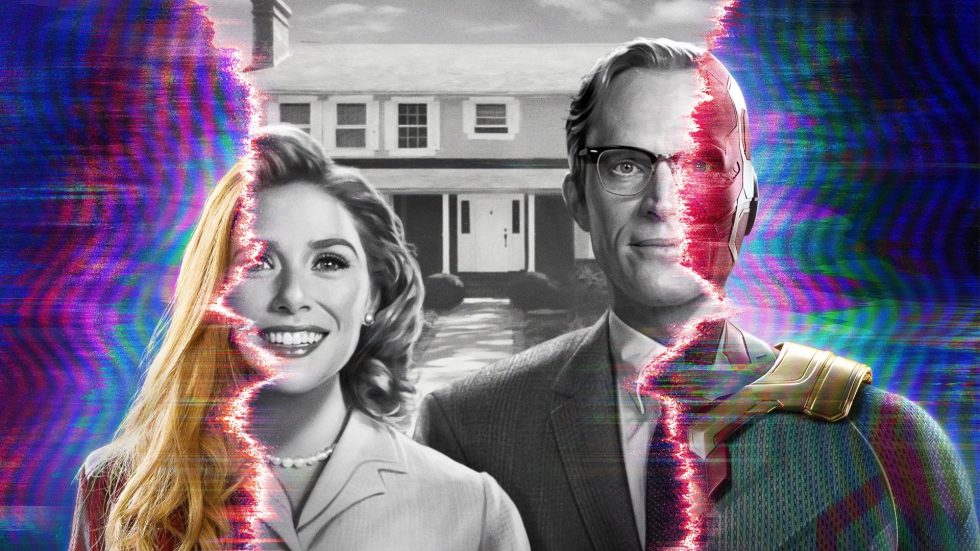 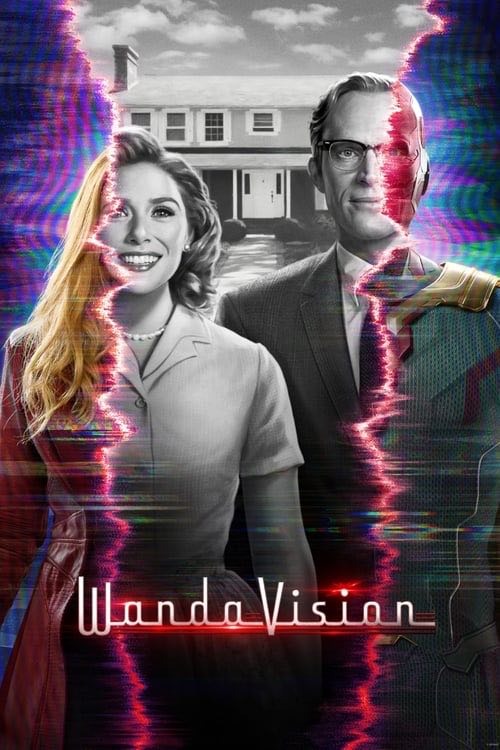 Some of my favorite work on Movie Reelist has been hunting down Easter Eggs and discovering connected storylines in the Marvel Cinematic Universe. Kevin Feige’s forward-thinking roadmap has never ceased to amaze me. While Covid-19 presented his team with severe challenges and unplanned delays, the first episode of Disney+’s new series, WandaVision, indicate impressive planning and execution will again prevail in phase four!

But before we can discuss WandaVision Easter Eggs and theorize what this show will accomplish long-term, we must talk about how beautifully well-done the 50’s-era sitcom and live studio audience production is carried out in this first episode. I wasn’t sure how this would work in the season’s scope, but it highlights the almost sinister-like nature of what’s happening behind the curtains, as is revealed as the show progresses. As that glorious MCU animation completes, the aspect ratio shrinks to 4:3 and turns black and white – a devolution of the high-tech world and characters we have come to know. It’s gorgeous.

Wanda Maximoff (Elizabeth Olsen) and Vision (Paul Bettany) are newlyweds who have just arrived at their new home in the fictional suburban village of Westview. Their arrival is part of this “episode’s” opening jingle.

WandaVision Easter Egg #1 is the name, Hopkins. Planted in their front yard is a real estate “for sale” sign that reads “Hopkins Realty Company, 732-555-0125.” This name could be a reference to Fred Hopkins from Marvel Comics’ “Web of Spiderman: Volume 1 #8.” Not much relation to Scarlet Witch or Vision I’m afraid, so perhaps it could be a callout to Sir Anthony Hopkins, a.k.a. Odin, king of Asgard. Separately, there is speculation Wanda’s growing powers might have something to do with Jane Foster’s transformation in Thor: Love & Thunder. As for the phone number, a quick google search places the location in Elizabeth, NJ. Coincidence or connection? You decide.

The couple has arrived in some alternate reality based on an old sitcom ala, “I Love Lucy.” But the question is, why? The show drops hints throughout with what I would call “glitches in the matrix,” if you catch my drift. Sorry. I’m deviating. In this reality, Wanda and Vision are aware and use some of their most basic powers. Vision can walk through walls via density manipulation, and he can also make insanely fast mathematical computations at his job. Wanda manages the homemaking tasks with her ability to move objects via telekinesis. This is accomplished, quite cutely, with some nifty low-budget effects. See if you can spot them! She can even materialize thin air items, like the couple’s wedding rings in the episode’s closing. More on that later.

WandaVision Easter Egg #2 is the headline from Vision’s newspaper that reads, “Little Baby June’s First Word Tickles Mother Sue.” This heading might reference Dr. June Covington, the genetically self-altered human recruited into the Dark Avengers by Norman Osborn. He would call her his “Scarlet Witch.” Funny enough, the MCU has yet to use her nickname in canon.

The “setup” or “bit” for this episode of WandaVision (remember, this is, after all, a sitcom) is that the couple is confused by a heart-shaped notation on today’s date of a wall calendar. The two go on about their day, wondering the importance of today’s date. The comedy here is that they pretend to each other they know today’s significance while falsely assuming the other does. Neither knows. It eventually leads to a hilarious and awkward episode climax.

Wanda’s day involves meeting the next-door neighbor, a typical nosey suburban housewife named Agnes, played superbly by Kathryn Hahn. It’s as good a time as any to mention one of the MCU’s past criticisms, including in our movie reviews: it is refreshing to see the fantastic special effects-laden norms and over-the-top fisticuffs getting the backseat to some exceptional acting. Olsen and Bettany are absolute professionals in these new roles, and yes, my fondness for Hahn has me praising her any chance I can get. I deviated again, didn’t I? After the new neighbor intros, Agnes assists Wanda in figuring out the mystery of today’s date. It must be the couple’s anniversary! However, the audience was only just recently informed Wanda and Vision are newlyweds. So why is Wanda somewhat convinced that it is, in fact, her anniversary? Well, for one, it implies the timeline is flowing reasonably quickly. And secondly, it could indicate that Wanda created this alternate reality tv show to cope with the emotional loss of Vision (remember, he died in Avengers: Endgame). Even in your dreams, there are going to be glitches in the details. Speaking of which, Agnes also points out Wanda is missing her wedding ring. 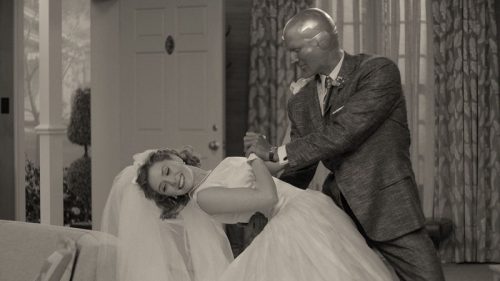 Meanwhile, Vision is toiling away at his day job at Computational Services Inc., puzzled about what the company he works for is, does, or makes.

WandaVision Easter Egg #3 is Vision’s necktie. There’s a simple logo of two small dots, each on either side of a hollow rectangle, with two slightly larger dots inside. This “clue” is still a mystery to me, but I think it’s essential to include because it’s featured on Vision’s Funko Pop! figure too. It looks like some sort of plug. Perhaps he’s not dead. Maybe he’s plugged in; after all, he is a robot. It could have symbolic importance as well. Keep an eye on this one.

It’s here we discover the noteworthiness of today’s date. Vision’s boss, Mr. Hart, reminds him that he and his wife will be coming over to Casa Vision for dinner! Tonight! Yikes! It’s that ole rite-of-passage, impress the boss or get fired bit. Vision coyly warns his wife, (again) assuming she knows, however, inadvertently cementing to Wanda that tonight is indeed “sexy time!”

WandaVision Easter Egg #4 is the first of a regular occurrence of commercials. This advertisement happens to be for a toaster: the Toast Master 2000. If the tagline, “Forget the past, this is your future!” wasn’t ominous enough, perhaps the menacing, blinking, (actual) red LED on the toaster is enough to get your gears going. What does it mean?! Oh, and the appliance is manufactured by Stark Industries.

The payoff in this episode comes to pass when Vision and Mr. and Mrs. Hart arrive in a darkened home. Wanda, thinking she’s surprised her hubby in her lovely nightgown, minorly exposes herself to the Hart’s. The awkward explanations ensue, as does the audience’s laughter.

With some help from Agnes, Wanda whips together a last-minute supper party. Did I mention Hahn was born for this role? Wanda uses her powers to prepare a meal and set the dinner table.

WandaVision Easter Egg #5 is the bottle of wine Wanda pours bearing “Maison du Mépris,” which translates to “House of contempt.” There’s also an ‘M’ logo on the neck of the bottle. We can surmise this pertains to Marvel Comics’ “House of M” eight-issue miniseries. There’s a lot of speculation that WandaVision could draw on elements from that storyline, especially as it pertains to Scarlet Witch’s altering of (all) reality. It could have far-reaching implications and influence over phase four, so stay tuned. 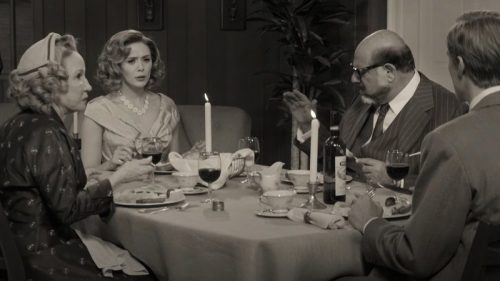 Things get weird at dinner when the Hart’s begin interrogating our couple. Where did you move from? How long have you been married? Why don’t you have children yet? None of which Wanda or Vision can answer at all. No memory of their “story” either can recall. This failure irritates Mr. Hart, causing him to lash out and inadvertently choke on his meal. For a moment, the camera gets eerily dark and claustrophobic, focusing on the leads as they hesitate to act while the man falls to the floor in crisis. Even more unsettling, a hysterical Mrs. Hart eventually turns directly to Wanda asking her to “stop it!” as if the woman is aware Wanda has something to do with the choking. Wanda, just in time, gives Vision permission to help, and he uses his density manipulation power to dislodge the offending blockage. Even weirder, everyone pretends the moment never happened as they quickly conclude their evening.

The “episode” closes with our couple determining this splendid day as their new anniversary. Wanda conjures a pair of wedding rings while Vision proclaims, “I do.” The couple lock eyes and “live happily ever after.” As the credits begin to roll, the camera slowly retreats from an old CRT television set, revealing an agent of some kind monitoring the show.

WandaVision Easter Egg #6 are the two encompassed sword logos on the agent’s desk. This reveal is undoubtedly a S.W.O.R.D. reference and thus discloses the primary antagonist of WandaVision. In the MCU Wiki, S.W.O.R.D. stands for Sentient Weapon Observation and Response Division. The agency, similar to S.H.I.E.L.D., is a counter-terrorism unit that monitors potential threats and reacts accordingly. There’s no reason to believe that isn’t exactly what they’re doing in WandaVision.

WandaVision Easter Egg Bonus goes to one of the names in the “show’s” fake end credits: Abe Brown. This character played a minor role in Spider-Man: Homecoming as a member of Peter’s academic decathlon team. Why? I haven’t the slightest clue.

Taking the episode as a whole, the cast are really leaning into these roles unlike anything that’s come from MCU content before it. Elizabeth Olsen seems to melt right into the era from look to body language. Paul Bettany is clearly having the time of his life, with an even clearer understanding of situational comedy. I’m sure the actual live audience helps here. And yes, I’m gonna do it again. I’m singing the praise of Kathryn Hahn until someone with actual pull in the awards business can hear me from the back. She’s that fricking good. I’m betting her character plays an even bigger role in the future, but more on that theory next time.

Join me in the coming days as I break down the Easter Eggs and review episode 2 of WandaVision. If you’re not subscribed to Disney+, please consider signing up through our affiliate link here.