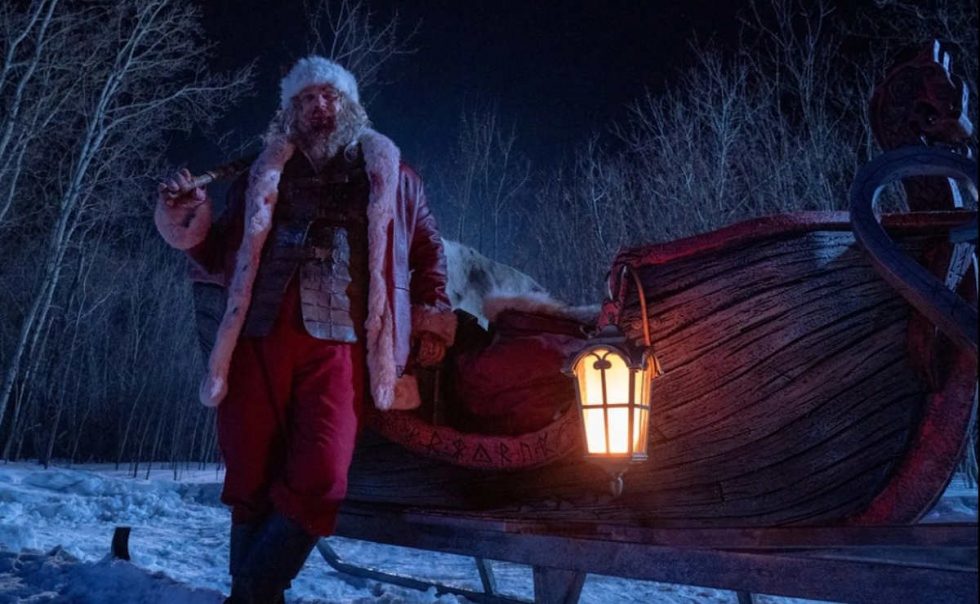 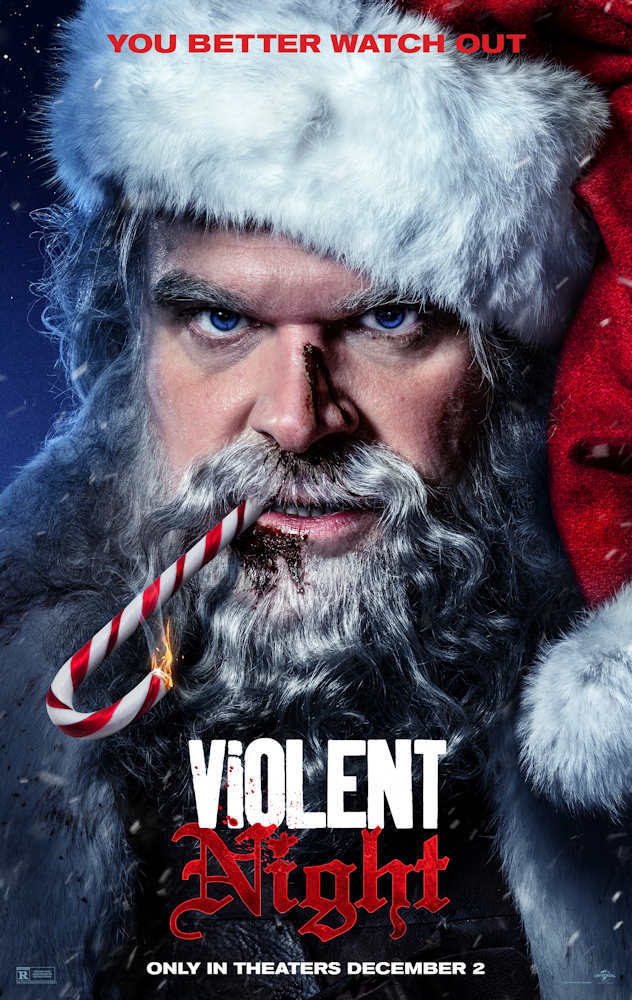 The Lightstones are trying to enjoy a tense if overly festive Christmas Eve at the opulent and well-guarded family compound. Matriarch Gertrude (Beverly D’Angelo) tolerates her grown children much like a wild boar might consider partaking in whole-clutch cannibalism for the sake of its own well-being. This is a family of cut-throats, though you might not realize it from the start. Alva (Edi Patterson) desperately wants the affection of her mother. Jason (Alex Hassel) is far cagier about his appearance but is there for the sake of his ex-wife, Linda (Alex Louder) and his adorable daughter Trudy (Leah Brady). As the evening winds down, the compound is overrun with mercenaries led by John Leguizamo and his band of merry murderers, eager to help themselves to the hidden family fortune.

What they weren’t counting on was Santa (David Harbor), trying to wrap up making his rounds so he can close out another soul-sucking Christmas filled with cash and video games. Trapped without his reindeer and low on the magic that keeps him protected, Santa relies on the unwavering belief of young Trudy to help him save her family, and ultimately, Christmas.

Yes, this sounds ridiculous. It’s not quite a rant about the commercialism of Christmas but it hip-thrusts in that direction. This is a horror movie with Santa Claus and a hammer called Skullcrusher, but clearly, you haven’t seen a little movie called Two Front Teeth (2006) with the nefarious Klausferatu, so by comparison, Violent Night is high art.

But really – Violent Night is fantastic. It’s not the romantic anti-Christmas film like Last Christmas (2019) which carries the sentiment of those of us who grind our teeth into powder over heavily-sentimental schmaltz. This is a Christmas film for those of us who like Christmas, believe in Santa (shut up), and want to see Santa pound the Naughty List into coal dust.

Violent Night isn’t just a horror movie where people get their throats cut on Christmas or fall from great heights, we have Die Hard for that. No. this is a really inventive, super fun sleigh ride with better-than-average dialogue, and energetic fight scenes with a man dressed in several layers of fur and leather.

David Harbour’s Santa is practically majestic, played with that edge of focused compassion and kick-ass attitude that we enjoyed in the first season of Stranger Things (Netflix (2016-2023). His Santa has a dark past and reparations to make, who misses his wife (you know, Mrs. Claus), and just wants to get the job done. He doesn’t even know how his magic works and it doesn’t matter because it just does. Yes, he’s a drunk who pees out of the sleigh while flying across city skylines, but it’s Santa, and Santa is magic, Santa is fatherly and kind, and Santa wants to make sure all of the good little children of the world wake up to a nice Christmas, even if he has to kill a bunch of bad guys with a woodchipper to do it. It’s believable. Just let the man do his job.

Dedication to the job is the Santa Way.

It’s true, young Trudy is a spunky young protagonist, and her love of all things magical and mythical is a charming heart-warming aspect to this otherwise aggressively brutal film, but do not allow that to convince you to bring your small children to Violent Night. I mean, it’s in the title why that would be a bad idea. Terrible things happen to a man dressed as Santa and a man dressed as Santa does terrible things, and I don’t know if you’d want your impressionable wee ones subjected to that so close to Christmas Eve.

I found Violent Night an absolute hoot to watch. It’s the kind of action-horror movie that is exhilaratingly scary, not flesh-rending scary. I wouldn’t call it a comedy-horror, mainly because I specifically don’t like comedy-horrors, but I did find plenty of parts to laugh through and I couldn’t help but smile as the mayhem was getting underway. I can overlook bad guys who are great at shooting but lousy at common sense because frankly, real life tells us bad guys are exactly lacking in actively firing neurons. If you think that may be your biggest complaint, you’re going to really enjoy this movie.

Violent Night is streaming now on the following services:
Powered by JustWatch