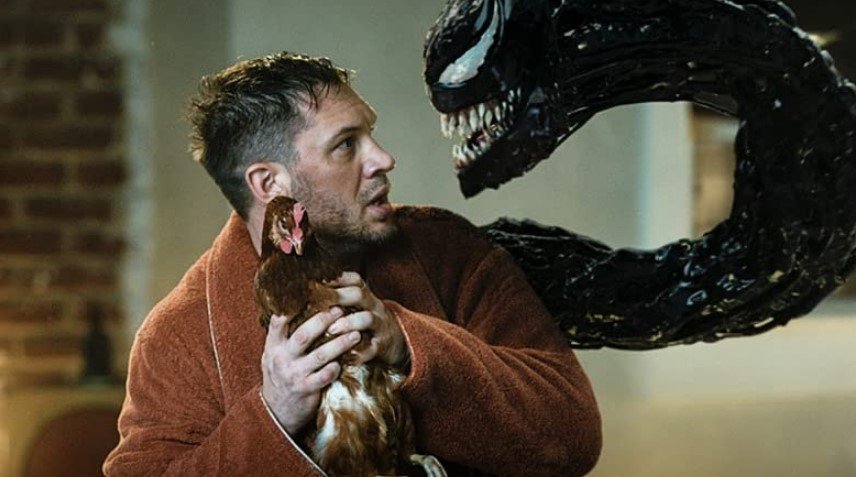 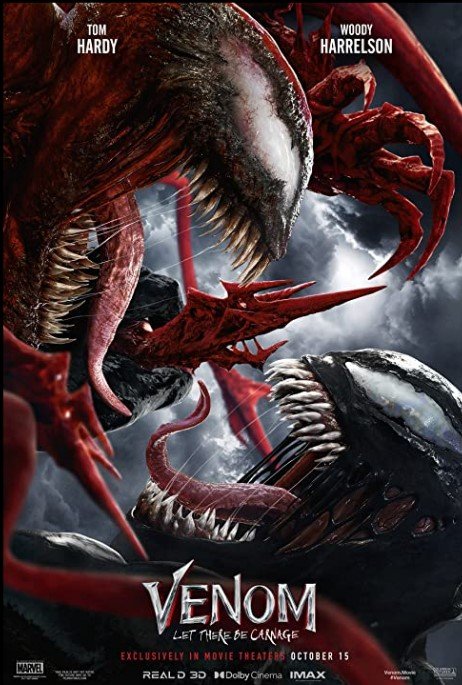 Venom: Let There Be Carnage

Venom: Let There Be Carnage (2021) is the kind of movie you watch when you want superhero fare, but nothing that requires deep thinking.

In the sequel to Venom (2018), Eddie Brock Tom Hardy) isn’t much better off than he was after his fiancée left him. Co-habiting with his alien symbiote, Venom, they have forged an uneasy alliance. Eddie won’t let Venom eat bad guys, on account of the previous body count, so it’s subsisting on chocolate and chicken brains. There is a lot of upheaval in Eddie’s life, starting with the dissolution of his longtime relationship with Anne (Michelle Williams) and her engagement, and his interview(s) with serial killer, Cletus Kasady (Woody Harrelson) which earn him fame and (apparently) a lot money.

The side story to this carnival is the Cletus/Frances Barrison (Naomie Harris) love affair that has spanned decades. Cletus and Frances were lovers at the orphanage where they grew up until Frances developed mutant abilities (sure) and was sent away and presumed dead. Cletus being unhinged never stopped loving her (okay), and killed a lot of people, either in tribute or out of boredom (we will never know). When a chance encounter with Eddie/Venom introduces a symbiote to Kasady, he becomes Carnage. Hilarity ensues (but not really).

Venom: Let There Be Carnage is kind of a mess. It’s the kind of movie that sounds like an actor was allowed to develop the story and direct the dialogue because there is an unusual amount of unnecessary dialogue and scenery-chewing. There are beautifully quiet scenes that would work better without the extra words (because someone wanted to act). When Eddie isn’t mumbling to himself, he’s throwing himself around the room and ruining the potential return of his security deposit.  Naomie Harris’ Frances Barrison is really just Pirates of the Caribbean’s (2006, 2007) Tia Dalma without the bad teeth – which is a shame because as Moneypenny (No Time to Die [2021], Spectre [2015], Skyfall [2012)]) she’s delightfully understated, letting the strength of the character speak. Here, she’d given barely controlled lip-licking and one-liners that feel written by people who heard one-liners spoken once while walking through a crowded room. Her character exists solely as a carrot to Cletus’ actions, and it’s an honest waste in an already crowded film of tenuous connections, superhuman leaps of logic, and scene transitions that are as jarring as they are baffling. Harrelson’s Kasady is given a jumble of lines about family and friendship and love and loss, but there is no foundation for his soapbox monologues, at least nothing that was left in the film. It leaves you scratching your head because when he says he only wanted a friend, there wasn’t nearly enough interaction between Eddie and Kasady to establish even a passing acquaintance.

There was too much angry Venom and not enough “odd couple” relationship between Eddie and Venom. If this is a year after the events at Life Foundation and they’re still arguing about how they want to proceed with the rest of their shared existence, it’s no wonder Anna left Eddie.

And that’s what a lot of Venom: Let There Be Carnage is, way too many ideas shoehorned, piledriven, and heavily dosed into 90 minutes that could have, with proper script doctoring and an honest fleshing out of ideas, been a respectable 2 hours. It would have given sense and depth to very hollow characters. We can’t like Eddie because he was a schlub when we meet him and isn’t given anything more to do than be a schlub with a notebook and a Ducati. Cletus Kasady is bad because we’re told he’d bad and a 45 second info dump, while entertaining, isn’t enough to give rise to a character who knows way more than he should – before the symbiote joined him. The whole love angle with Cletus and Frances – no. that relationship is bonkers, even by superhero movie standards.

There’s a particularly bad scene where Carnage literally becomes the deux ex machina finding information on the Internet that probably isn’t on the Internet. Could there have been better ways to find that information without insulting the audience? Absolutely. Do I believe the person who wote that scene (okay, Kelly Marcel) had any understanding about HIPPA, confidential police files, and the difference between Inter- and Intranet? Absolutely not.

I want you to know, I didn’t hate this movie, but I wasn’t wowed by it either. Too many holes, too many leaps from scene to scene, and I don’t like it when movie writers and directors assume I’m either a superfan or an idiot. Movies like this are too expensive to assume your audience is either one or the other. Wait for streaming on this, and don’t pay more than $3.99 to rent.

Mind yourself, there is a mid-credit scene opening the doors to a cross-over event that’s been a decade in the making, and if Tom Hardy gets his way, another jumbled mess of a Venom story.