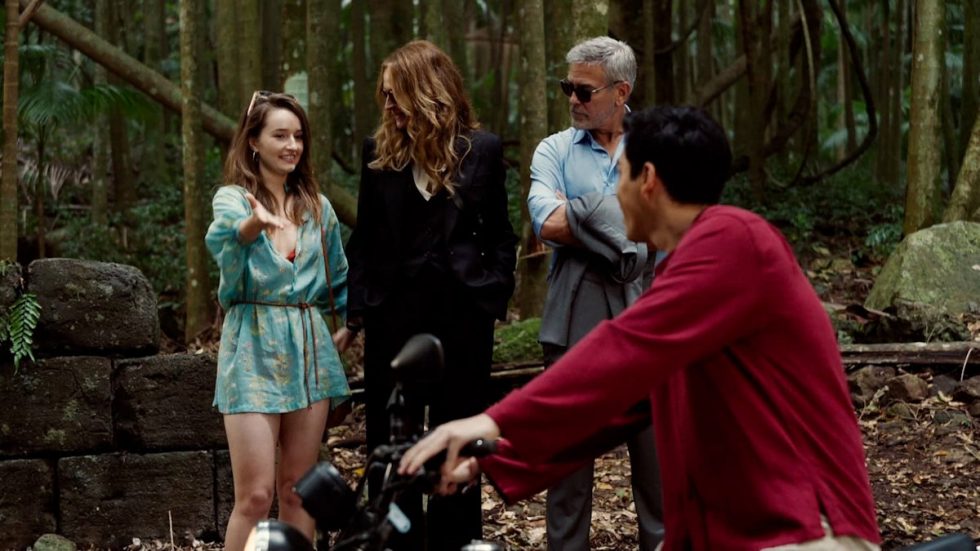 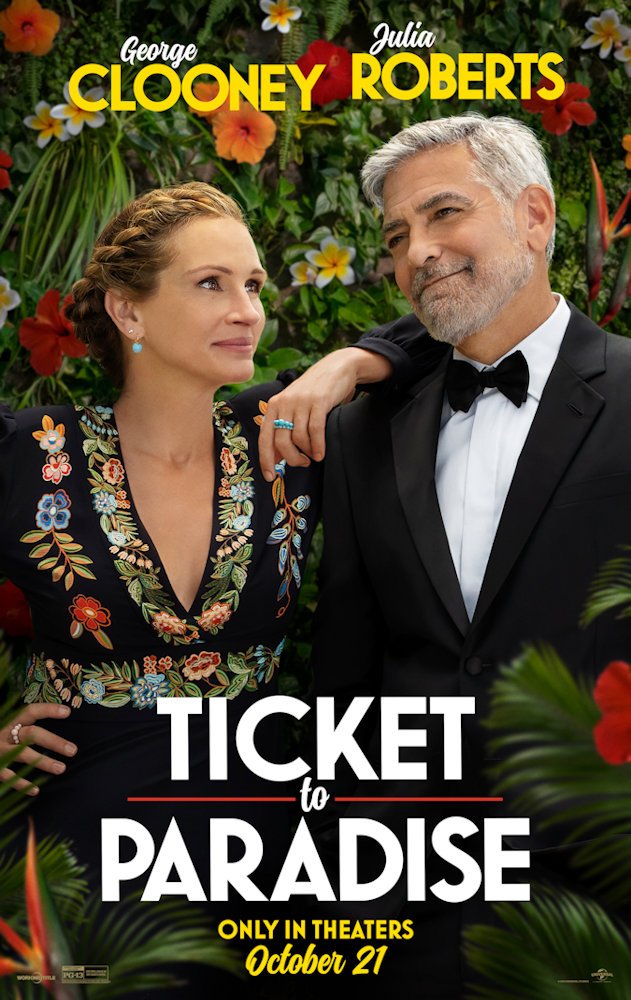 For a movie that could have been so much worse, Ticket to Paradise (2022) is a charming adult tale of love, regret, and acceptance.

You know this isn’t my usual fare, so this review may be jarring to some.

To celebrate her graduation from law school and job acceptance with a prestigious law firm, Lily (Kaitlyn Dever) and her friend Wren (Billie Lourd) spend a few weeks vacationing in sun-drenched paradise of Bali. There Lily falls so deeply in love, she decides to eschew the life of a lawyer and reset her existence as the wife of a seaweed farmer with Gede (Maxime Bouttier), the man she loves. Don’t worry though, because while they plan to live quietly, they aren’t poor, and Lily isn’t an idiot – Gede has just made an exclusive deal with Whole Foods, so they aren’t eating dirt. Lily has spent her whole life being an over-achiever, so she’s rightfully talking the opportunity to take time out for herself to find love in one of the most beautiful places on earth.

Enter Georgia (Julia Roberts) and David (George Clooney), Lily’s parents. They too had a whirlwind romance 25 years ago and called it quits five years later, citing irreconcilable differences and carrying a spiteful grudge for each others’ existence ever since. He’s now a successful architect and she’s a prominent art dealer. Upon hearing of Lily’s romance and pending nuptials in Bali, they hop a plane with the intention of talking some sense into Lily, or at the very least, sabotaging her wedding. They call a temporary ceasefire to unite in stopping their daughter from making the same terrible mistake.

Totally the actions of rational people who love their kid, right?

The story itself is a one-sheet copied from of any number of romantic comedies about people sabotaging the happiest day of their best friend’s/ex-girl-friend’s/parent’s/child’s life. Julia Roberts has been in more than a few of them (see specifically: My Best Friend’s Wedding, 1997). It’s the kind of cruel comedy that could only happen in the movies, because when it happens in real life, no one gets the girl, and no one lives happily ever after. What makes the actions of Georgia and David feel earnest instead of downright psychopathic is the ability of this surprisingly well-written story to almost empathize, in a lopsided fashion, and agree with parental love and meddling. It’s able to be self-reflective on the trauma of divorce not only for the children involved but the former couple. In trying to save Lily, they risk destroying two more lives and an entire Balinese family. Georgia and David literally cannot stand each other’s company for completely different reasons, and none of those reasons are entirely malicious. They remember their time together differently, either due to the magic of selective memory or through the grimy residue of hurt and regret.

This isn’t a cautionary tale about marrying into a different culture and being scared by encroaching reality into jumping ship, and to the film’s credit, Bali isn’t treated like some backward paradise of naïve innocence and simple living. Gede’s sister is a doctor, and they, as well as their father, all speak fluent English. It doesn’t appear to be a picture about parents worrying their daughter is jumping into a whole new foreign culture, because what they object to is the length of time Lily and Gede have known each other. The chemistry of Julia Roberts and George Clooney, and also Kaitlyn Dever and Maxime Bouttier, keep Ticket to Paradise from being saccharine and heavy-handed. Though not filmed in Bali, and principal photography took place in Queensland Australia, Balinese culture and tradition are given a respectful place of honor.

It’s witty and laugh-out-loud funny in some parts. Ticket to Paradise isn’t what anyone was expecting, but it was a pleasure to sit through and an enjoyable change of pace.

Ticket to Paradise is streaming now on the following services:
Powered by JustWatch