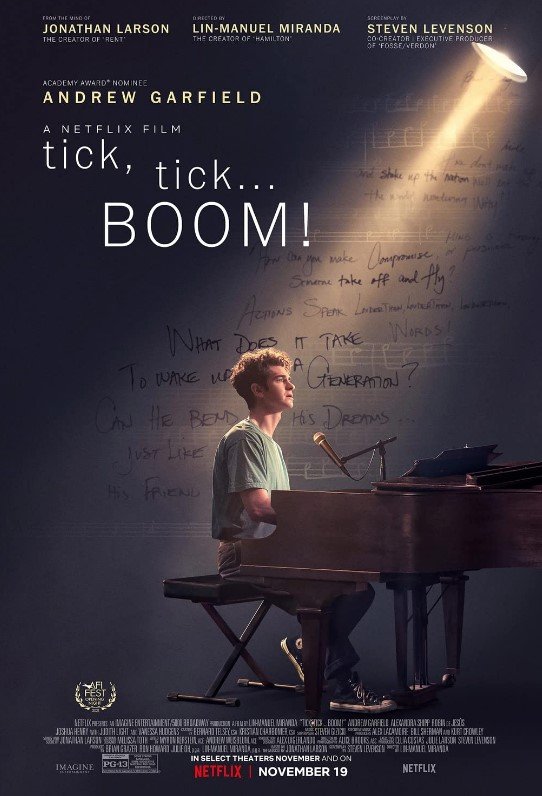 Many years in the making and 25 years after his death, deceased writer and composer Jonathan Larson’s autobiographical one-man show Tick, Tick…Boom! is finally brought to life under first-time director, Lin-Manuel Miranda, in this stage-to-film adaptation of the award-winning musical. Opting to base the film on the 1996 three-actor production created after Larson’s passing, Miranda applies his Midas touch on this gripping tale of a writer and his eternal battle to make something of himself.

At first glance, it may seem odd that Miranda is directing a film, but after understanding how Larson influenced Miranda and how their careers have shared similar success, it begins to make better sense. Miranda first saw Tick, Tick…Boom! while in college and connected with the story of a composer who moves to NYC but struggles to find success. Almost feeling a kinship with the deceased writer, Miranda later found himself on stage playing Larson. And it continued when Miranda first saw Rent. Miranda told entertainment website Vulture in 2018 that Rent showed him that you could write a musical “about your friends and what you knew, and put your own life into musicals.” Perhaps it was this inspiration that helped Miranda eventually win a Pulitzer Prize and Tony-award honors similarly bestowed upon Larson’s works posthumously. And just like how you can hear how Miranda’s In the Heights influenced Hamilton, those paying close attention will see how Tick, Tick…Boom influenced Rent.

Starring as Larson is Spider-man alum, Andrew Garfield. While on paper it may seem like an unconventional choice, Andrew Garfield isn’t a stranger to Broadway having won a Tony for his role in Angels in America. In fact, it was that play that helped convince Miranda that the Academy Award-nominated actor was the right choice to play Larson. And it’s safe to say he wasn’t wrong. British import Garfield embodies the selfish yet charismatic writer fighting to complete his first musical and become a success before he’s too old. Having never sung in public, Garfield took voice and piano lessons shortly after being cast and it pays off. Tick, Tick…Boom! doesn’t possess the most exciting Broadway soundtrack, but Garfield’s vocals are euphonious.

Similar to both versions of the stage musical, the film follows Larson, a broke and struggling writer about to turn 30 who questions where he is at this stage in his life. Larson isn’t unlike many twenty-somethings who hoped they would be further along in life but his narcissism doesn’t allow him to see past that fact. Tapes and CDs by successful artists and books by treasured authors that surround his writing space almost taunt Larson who has spent the last eight years trying to complete Superbia — an “original, dystopian musical”.

The film alternates between Larson performing in Tick, Tick…Boom! and his attempts to complete Superbia while maintaining relationships with those around him. Larson is continually haunted by a ticking clock — taunting him to complete the one missing song for his play, to sell his completed play, to make something of himself. As he tells his co-worker, “You get to a certain age and you stop being a writer who waits tables and you become a waiter with a hobby.”

It’s this obsession for success that blinds Larson from trouble with girlfriend Susan (Alexandra Shipp) and prevents him from being fully present in childhood best friend Michael’s (Robin de Jesus) life. At one point he has to be reminded that he’s “writing a musical, not saving the rainforests.” But to Larson, he is because his musical is the only thing that has defined him to this point and it not being a success means the end of the world, his world.

Like many musicians, everything Larson sees or hears could lead to his next song — so much so that during an impassioned fight with Susan, he is more focused on how he can use the fight to create new music than in listening to her. Garfield’s strong performance coupled with first-rate vocal performances by Shipp, de Jesus, and a grown-up Vanessa Hudgens, whose voice has matured since her breakout role in High School Musical, bring Larson’s life to well…life. Hudgens’ duet with Susan on the melodic “Come To Your Senses” elicits goosebumps.

While “No More” featuring Larson and Michael doesn’t quite land, feeling more like a cheesy and amateur 1980’s MTV video, the casts’ vocals and Miranda’s direction shine on other numbers including “Sunday”, “Swimming”, and a simple, yet elegant “Why” featuring Larson alone at a piano.

Advice Larson receives after his workshop to write about what he knows changes his life and it’s those words that led to the creation of Rent. Sadly, Larson passed away from a sudden aortic aneurysm the night before his masterpiece was to debut Off-Broadway. He was only 35. He never got to see that his creation spent 12 years on Broadway and, more importantly, changed Broadway forever. While Andrew Lloyd Webber first brought rock to Broadway, it was Larson’s “Rent” that revolutionized musicals.

Fans of Rent will appreciate the small things in Larson’s life that pave the way for this smash hit. Many of Larson’s friends are living or have died from AIDS, an epidemic running rampant in New York in 1990 that is the subject of the hit musical. Boho Days, perhaps the best number in the film (and interestingly enough left out of the stage version), feels like a precursor to La Vie Boheme. The many messages left on Larson’s answering machine are reminiscent of those played through “Rent.” And Larson’s frustration with being unable to write one final song for Superbia mirrors Roger who wants to write one great song before he dies.

Tick, Tick...Boom is streaming now on the following services:
Powered by JustWatch