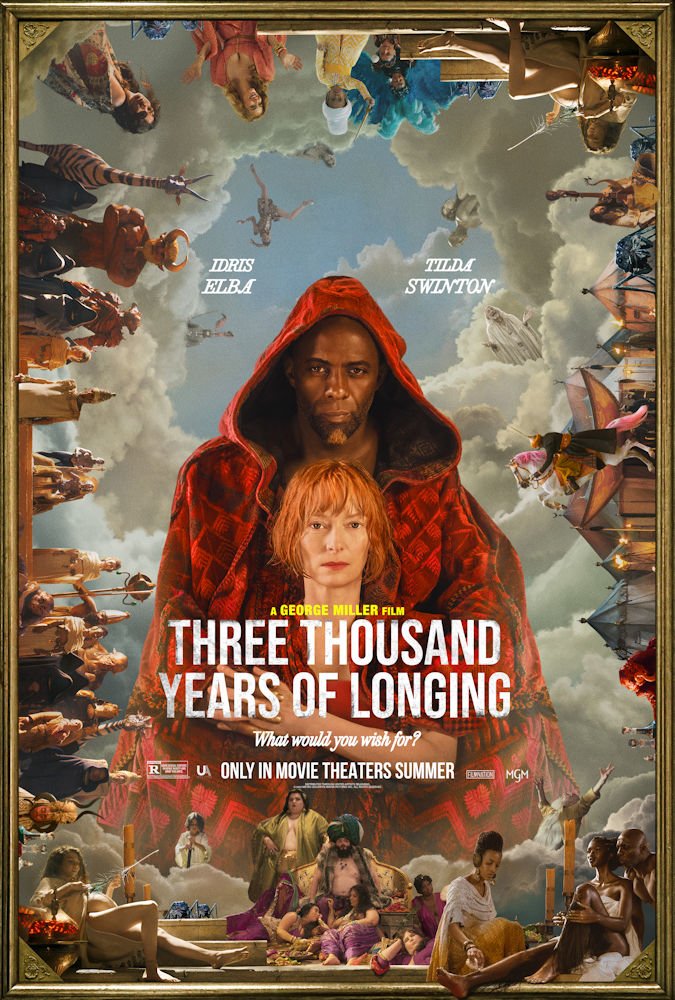 Three Thousand Years of Longing (2022) is a novelist’s film full of sensuous dialogue and exotic images. It may seem dialogue-heavy to some, but as the story gets rolling and the years melt, those words roll around in your head like the softest Turkish Delight.

Dr. Alithea Binnie (Tilda Swinton) is an esteemed narratologist, a scholar, and a perennial student of the power of storytelling and how it shapes language and perception of the modern world. She lives alone, travels alone, and is her own best company, as she would tell anyone rude enough to broach the subject. While presenting at a conference in Istanbul, she accidentally releases a Djinn (Idris Elba) from a tchotchke picked up from a pile in a crowded bazaar. A bottle of one sort or another has been his prison for thousands of years, the result of poor choices stemming from love, admiration, and his own bad luck in getting previous owners to grant all three wishes. He offers Alithea three wishes of her own, but this lover of words and backstory knows how traditional Djinns work and the tricks they play on the malleable mush of mortal minds. She also wants for literally nothing, happy in her solitary existence, making a modest living. Alithea instead makes him tell his story, and so unfolds the three thousand years the Djinn has suffered all for want of love and happiness.

Based on the short story, “The Djinn in the Nightingale’s Eye” by A. S. Byatt, contained in a story collection by the same name (Random House, 1994), George Miller’s adaptation sets up the stark contrast between the dueling reality of Alithea’s monochromatic academic life and the Djinn’s haunted existence, first as a consort to a queen, then subjected to the wishes of a spoiled concubine, and finally, the erratic whims of an unstable genius. Tilda Swinton, never not restrained, is particularly subdued, her character spends the majority of the movie in a bathrobe and towel, enraptured by every story, surrounded by the otherworldly shimmer of his essence barely contained in the space. The audience is buying their ticket to hear the rumbly basso profundo of Elba’s Djinn and get lost in the distracting wonder.

I’m not saying Three Thousand Years of Longing doesn’t feel long for its lean 108 minutes, but for what it lacks in a cohesive wraparound narrative that drags towards the end, it more than makes up for the gorgeous cinematography of John Seales. Every scene from the past creates tangible memories of cool stone, warm spices, and scented skin. This is an unconventional romance, not of bodies or personalities, but of words and stories and places and times that only exist in recollections and forgotten books. There is bloody action and naked bodies and wishes in want of a purpose, but it is a complete tale, all of them together, and it is a fantastical story best enjoyed in the quiet embrace of one’s heart’s desire.

We are dust in the presence of a Djinn’s subtle flame, and we are grateful for it.

Three Thousand Years of Longing (2022) is rated R for mild swears, the sort of bloody violence depicted in wars over scraps of land, vivid images of madness, ecstasy, and desire, and an academic conference, which is known to be its own kind of hell.

Three Thousand Years of Longing is streaming now on the following services:
Powered by JustWatch