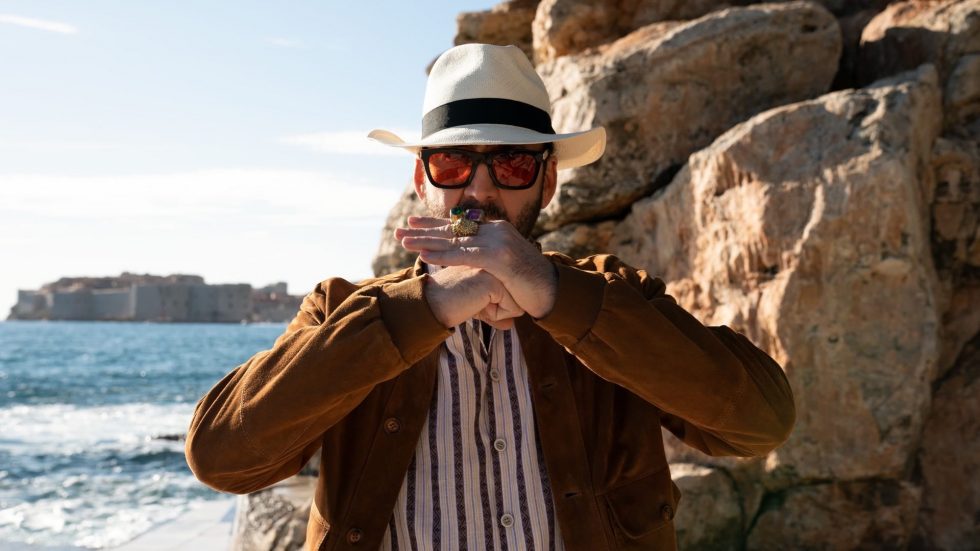 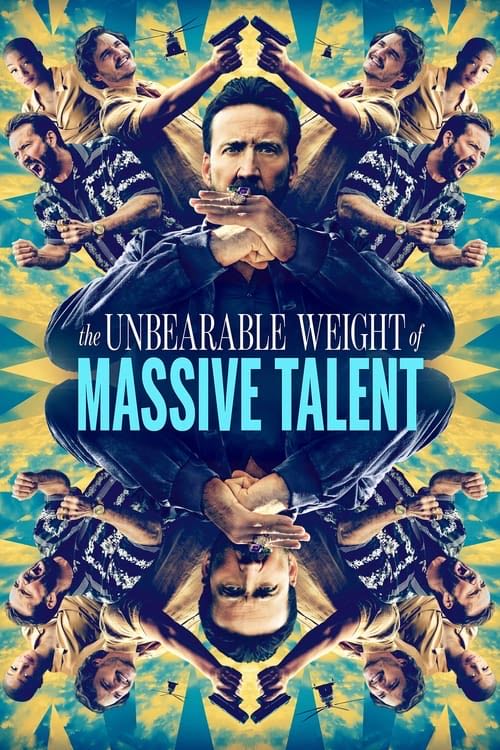 The Unbearable Weight of Massive Talent

Nick Cage (Nicolas Cage) has hit a creative wall and it’s mostly made up of his past performances, in The Unbearable Weight of Massive Talent (2022). A consistently working actor, he’s under-appreciated by his daughter, ignored by his ex-wife, and his only fan seems to be a weird ghost of his Wild at Heart (1990) persona, Sailor Ripley, addressed here as Nicky. Accepting one last gig before bowing out of acting forever, Nick spends the weekend as a celebrity guest for a billionaire because he needs the money to pay off mounting debt.

There isn’t a better fan than Javi Gutierrez (Pedro Pascal) and having Nick appear as a guest at his birthday party is the ultimate in high-profile vanity. Javi has written a screenplay (because, of course he has) with a role specifically for Nick. What starts out as a pay-for-play gig turns into something sweet and touching, a bit like all imagined interactions with favorite celebrities might go. It also turns into something scary and dangerous because this is a Nicolas Cage film, and the CIA (Tiffany Haddish and Ike Barinholtz) is involved. They have designs on Javi being a dangerous kingpin with a kidnapped girl on his compound and an election to throw. For the sake of the mission and his own ego, Nick is going to make sure it’s the best movie ever.

Javi is that starstruck fan lurking in everyone. Will our favorite people love the same things we love? Laugh at the same jokes, be impressed at our cringey collectibles, and live up to the blinding internal image we’ve created? No, it would never happen, and it’s actively discouraged to ever meet one’s heroes, but this is a Nicolas Cage film, and not only does it have to happen, but you’re rooting for them to become BFFs. There is an organic growth for both characters as they’re both searching for a way to shake off expectations and express their purpose through their art. It feels corny and on-the-nose, but it’s supposed to be.

Cage and Pascal are joined by Sharon Horgan who plays Nick’s long-suffering ex-wife and Lily Sheen as Addy, Nick’s daughter who recognizes she’s living in the tragic shadow of someone who was once great and is still fighting for that dimming spotlight. Die-hard Cage fans will see nods to some of his greatest hits, like Leaving Las Vegas (1995), Con Air (1997), Gone in 60 Seconds (2000), National Treasure (2004), and more I likely missed, but save those Easter eggs for the 4K release.

If you’re looking for linear logic, are you sure The Unbearable Weight of Massive Talent is the movie you want to see? It’s bananas in the way that smashing every Nicolas Cage movie into one meta-movie can be, which makes it fun since it’s not taking itself seriously. It’s not a parody in the sense that it mocks past performances. It embraces the core of how fans and detractors of Nicolas Cage see his body of work, and no matter on which side you fall, this is a very entertaining film. It’s a retrospective very few actors bother to do while they can still appreciate the spectacle. Jean-Claude van Damme did something very similar with JCVD (2008) and continues to be self-referential with films like The Last Mercenary (2021), however an aging action actor is not quite the same as Nicolas Cage (but is anyone?). Nicolas Cage, all by his own wee self, is a monolith of acting, over-acting, and uncomfortable silences. Whether he’s a caricature of himself or we’re seeing the real man for the first time is inconsequential. We’re having as much fun as he is.

If you’re reading anything deeper into The Unbearable Weight of Massive Talent, you’re trying too hard. We’re here to be entertained and we are entertained.

The Unbearable Weight of Massive Talent (2022) is rated R for swears, a kidnapping, people getting punched in the face, people getting shot, wild car crashes, lots of driving where you really just want people to watch the dang road, and a Nick on Nicky kiss I’m probably going to need therapy for.

The Unbearable Weight of Massive Talent is streaming now on the following services:
Powered by JustWatch