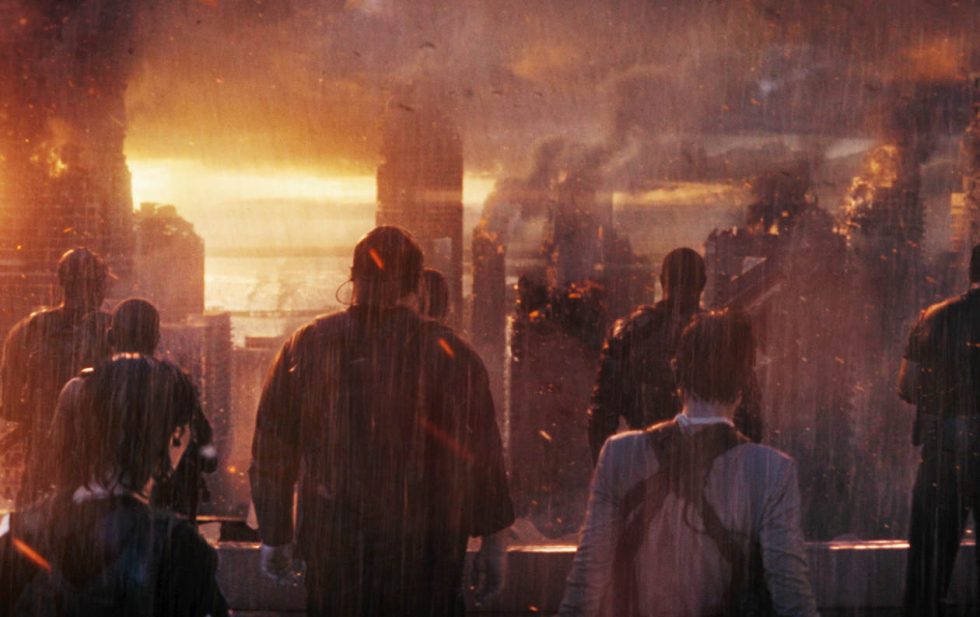 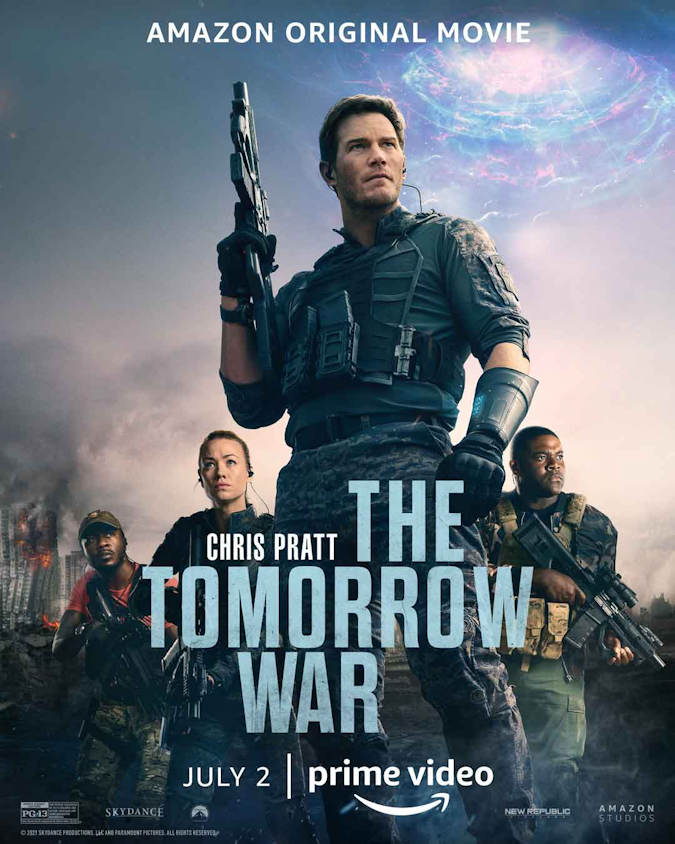 In a time travel, dystopian sci-fi nightmare, mankind is menaced by the cinematic babies Alien and Predator in the Tomorrow War (2021).

Dan Forester (Chris Pratt) is a former military turned high school teacher pressed back into service when humanity might fight for its very survival in the future. Christmas Eve 2021, soldiers from the year 2051 emerge from a wormhole on a soccer field to tell the world that everyone and their descendants will die when an alien race spreads like cockroaches across the globe in a matter of months. When future Us is down to its last 500,000 people, it reaches back in time to when the Earth was bountiful and teeming with human life to pluck the best and brightest for 7-day deployments. When that fails, it relies on the regular old citizenry, drafting when the world stops volunteering their best and brightest. That’s where Dan comes in. He’s an Iraq War vet and current high school science teacher, with a wife, Emmy (Betty Gilpin), and whip-smart 9-year-old daughter, Muri (Ryan Kiera Armstrong). He’s also got an ex-military Dad (J.K. Simmons) who’s the convenient conspiracy foil when necessary. When he fails to find his life’s purpose, he’s drafted into The Tomorrow War, along with fellow citizens Tech Guy Charlie (Sam Richardson), Norah (Mary Lynn Rajskun), and Dorian (Edwin Hodge) playing the multi-tour vet with a fatalist edge. When their first mission is simultaneously moved up and goes sideways, Dan and his conscripted compadres have to fight and survive for the next seven days before their fancy arms thingies return them home.

That’s just Act 1, kids. There is a lot going on, but I can’ go into too much more at the risk of deep spoilers. Don’t worry, though. You’ll see most of the plot telegraphed all by yourself. I’m not pointing it out as a bad thing because it’s Sci-Fi dystopian, and we’ve already seen a lot of it. That doesn’t make The Tomorrow War unwatchable at all. It’s quite entertaining, and once the 1st Act ends, and we seem to be back where we came in, the action picks up. The science is shakey because that’s not the point of a time-travel alien movie. We’ll accept the wormhole for the plot point that it is.

The Tomorrow War feels like a long movie at 2 hours and 20 minutes and likely would have played far better as a three-part series. Its structure is that of a 3-act play with beats so definable you can practically see the curtain close and open again on a card that says, “ACT 2.” The last 3rd is bloody as the alien action kicks into high gear.

Notable players are some of our short-term characters, and those we thought were short-term reappear at the end of Act 2. They’re not just cannon fodder but manage to add a little dimension to a Marines vs. Aliens by putting dangerous weapons into the hands of everyday humans. It makes everything just a little more terrifying. Chris Pratt plays Chris Pratt, but we’ve gotten used to him not getting super angry about anything and still killing things with incredible accuracy.

The Tomorrow War is a fun popcorn flick from Amazon Studios that may take you two buckets to finish. It doesn’t get sappy, the action is high-octane, and the aliens are fast and terrifying and have too many limbs that shoot spikes. Can you compare it to any of the Alien or Predator movies? Of course not. Only elitist gatekeepers pull that nonsense. Everyone gets a gun, everyone gets to shoot something, and some of those people get to go home. That last 20 minutes does tend to drag with a weirdly shoehorned-in callback from the first act and a solution no one in any government think tank thought of ever, which is a bit of a deus ex machina, but if it means this movie ends, then I give it my complete support.

The Tomorrow War is streaming now on the following services:
Powered by JustWatch