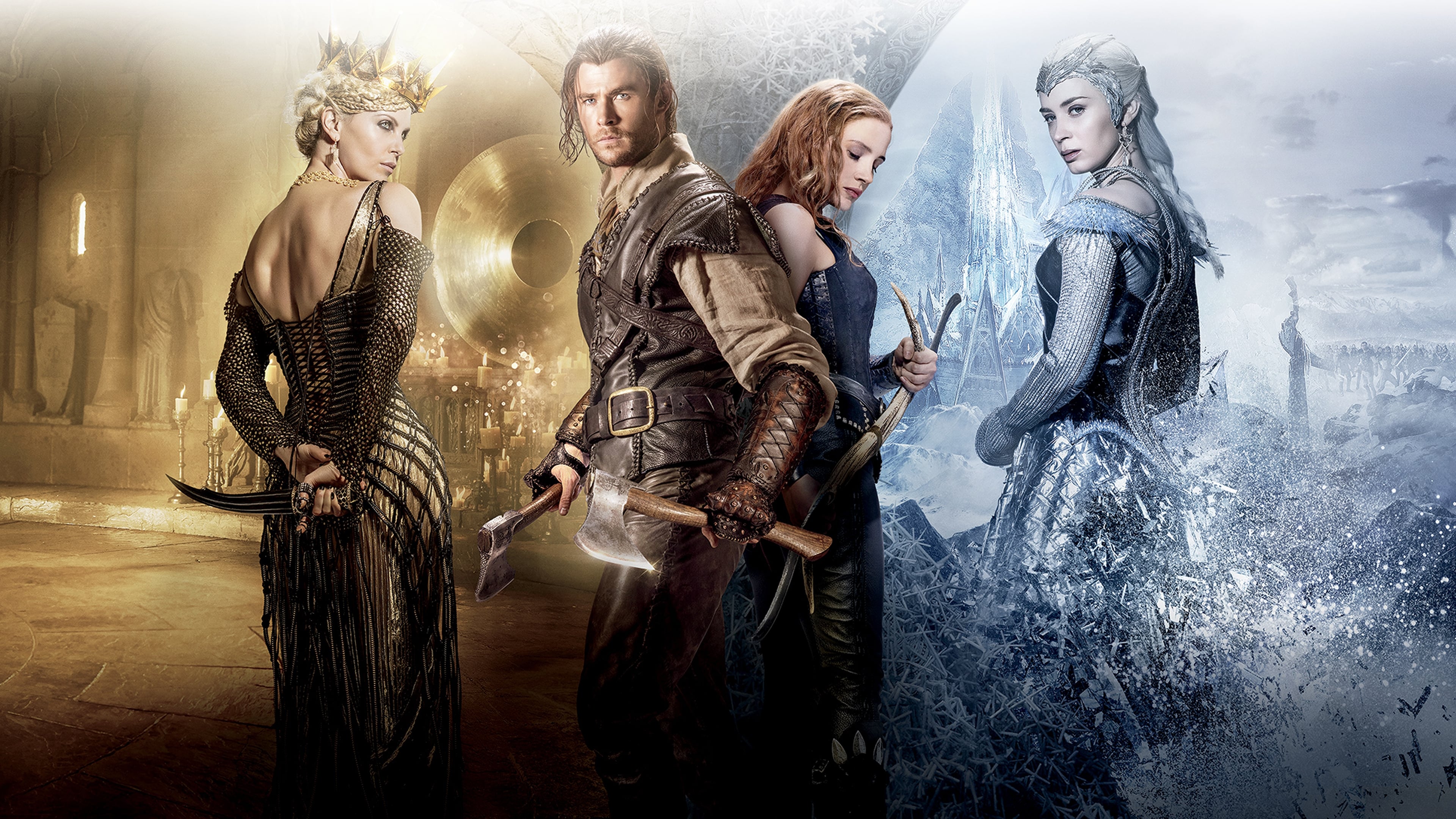 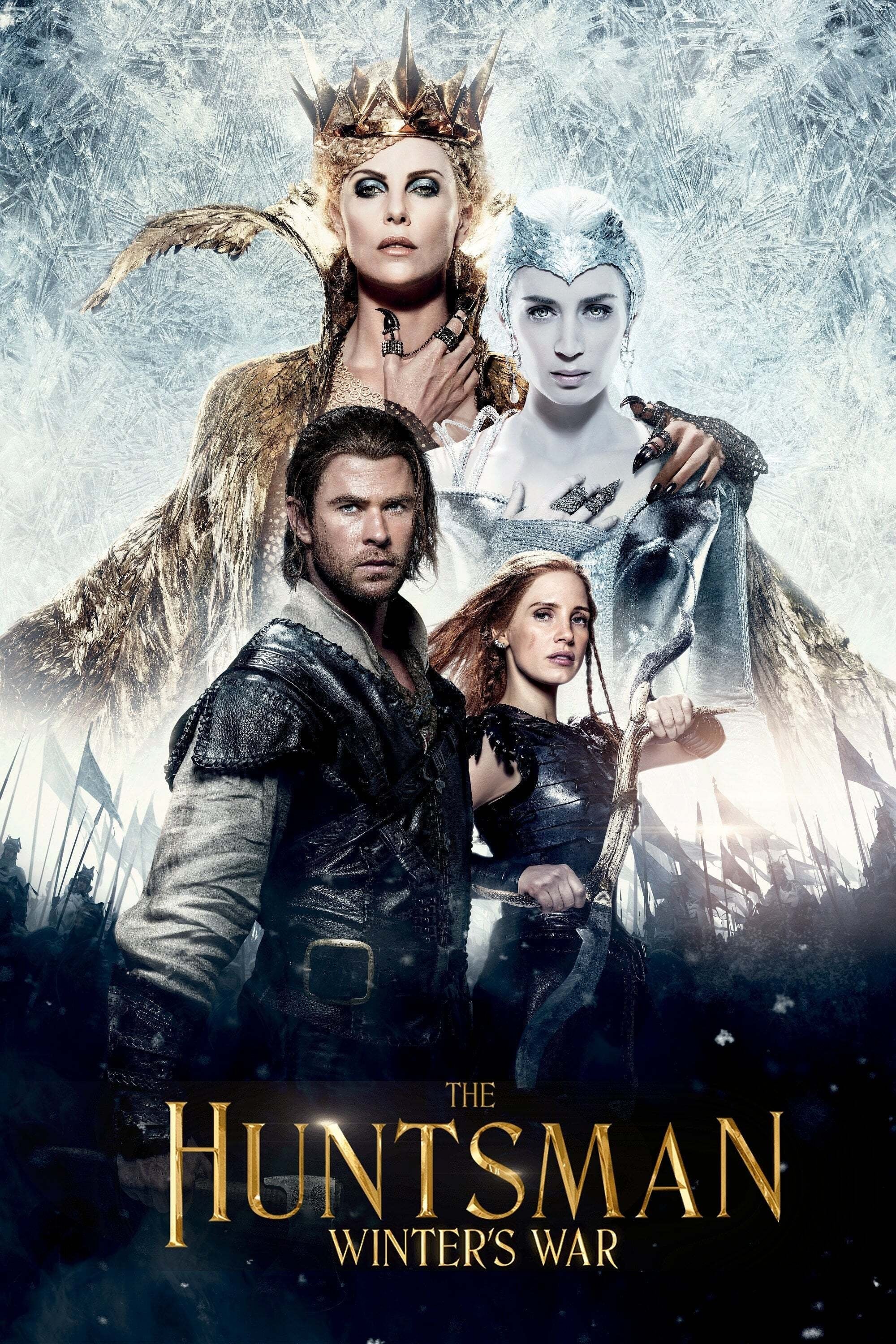 I’m not a fan of high fantasy as a general rule, but I do enjoy an escapist tale now and again. Also because I’m not avid movie-goer (says the reviewer) a lot of movies never hit my radar until they’re on Netflix. That’s why I was a little surprised to see The Huntsman: Winter’s War pop up in the review queue. From the poster I knew it had 4 people, some corsetry, and Chris Hemsworth’s magnificent hair. I then learned through the grapevine that it was a prequel/sequel to Snow White and the Huntsman (I’m referring to it as SWATH going forward), and I was afraid. I really didn’t know what I was in for.
Here’s the short version: this is one of those movies you might land on while surfing channels on a mental health day. You’ll watch it because there is nothing better on and when it’s over you’ll be a little disappointed there was no opportunity for snark and instead you’ll be charmed and touched. You’ll check the listings to see when it’s on again and then hit up Netflix. You’ll wish you’d seen it in the theater because it really is both stark and lush, from the cold of the North, to the Dark Forests everyone seems to return from even though the legends say otherwise. You’ll make popcorn and watch it again. You’ll find yourself defending it to people won’t see it and will dismiss it as ridiculous. You’ll want to hurt them, but don’t. It’s what they want. They’re damaged people.
Don’t be that you.
If you skipped SWATH (and if you’re like me you know exactly why) you won’t be left out of the story before the action starts. The Huntsman: Winter’s War acts as both a prequel and sequel, and almost a standalone film. Queen Ravenna (Charlize Theron [you’ll know her because when she comes on screen you’ll want to whisper J’adore], Aeon Flux, Prometheus) newly widowed and drunk on her own power, counsels her sister Freya (Emily Blunt, Looper, The Wolfman) on all manner of love and want. You can see where this is going. After a terrible tragedy, Freya leaves the castle and make her way North, to begin her own kingdom where she becomes a literal ice queen, think Frozen’s Elsa without the compassion. She conquers villages and steals the children, believing for the rest of her miserable life that love is a lie and power is all that matters. She trains them for her personal, ruthless army and they become their own legends.
The first act of The Huntsman: Winter’s War is spending time with this “family” and watching young Sara, Eric, and Tull grow up to be brutal, effective Huntsman. Then a thing happens involving older Sara (Jessica Chastian, Crimson Peak, Mama), Eric (Chris Hemsworth, Avengers, Cabin in the Woods), and Tull (Sope Dirisu, Humans (TV)) and it’s bad. We pick up seven years later and immediately following the events in SNOW WHITE, and now we have some history about the Eric the Huntsman, who is tasked by now Queen Snow White and King William (Sam Claflin, reprising his role from SWATH, The Hunger Games, The Quiet Ones) to track down Ravenna’s now missing mirror.
Along for the ride, more for reward and debt collection than nobility are two dwarfs – Nion (Nick Frost, back again, Shaun of the Dead, Galavant (TV)) and his half brother, Gryff (Rob Brydon, Lock, Stock and Two Smoking Barrels). While the Huntsman is the pretty boy hero with lots of well-executed fight scenes, this story is won with the Nion and Gryff and their rolling commentary on everything from dwarf women to life in general. Together they meet more dwarfs (Sheridan Smith and Alexandra Roach because what’s Snow White without dwarfs), goblins, and band together to slay the evil queen and save the kingdom.
Because it’s high fantasy, and that’s how it works.
Sure you can see how this will likely end from the first act, and some of the plot turns couldn’t have been more obvious if you’d read the full treatment before the lights went down, but there is an amazing complexity to this movie I wasn’t expecting. There is tenderness and terror, with the usual trust and betrayal. It’s never too heavy-handed or too light-hearted, and the fight scenes are really amazing.
This is not a 21st Century retelling of an 19th Century tale – the story is presented with all of the brutal shock and acceptance of a difficult time in a treacherous land, where war was common and life without love was hard and empty. While primarily an origin story for Eric The Huntsman, there’s plenty of room for world building. I’ve since seen descriptions of this movie emphasizing the escalating war between Freya and Ravenna, but that point is completely secondary. Eric’s own history is chilling and thrilling and his reasons for his actions in SWATH are further explored, but not in some whiny Terrence Malick way. The Huntsman a tragic, reluctant hero suffering from grief, and when he’s given Purpose he embraces it fully, even at the cost of his own life. Love never dies in movies like this, because that’s how fairy tales work.
The more I think about this one the more I do want to see it again – and maybe even SWATH – just to get the fuller story you understand.
This is a recommend for me, a fine way to spend a Saturday to laugh and cringe and maybe even shed a tear or two. The Huntsman: Winter’s War is high, dark fantasy at it’s hokey, hilarious, heart-chilling best.
And if you’re expecting anything more – remember, it’s Snow White, not Shakespeare. Grab some popcorn and have fun.

The Huntsman: Winter's War is streaming now on the following services:
Powered by JustWatch