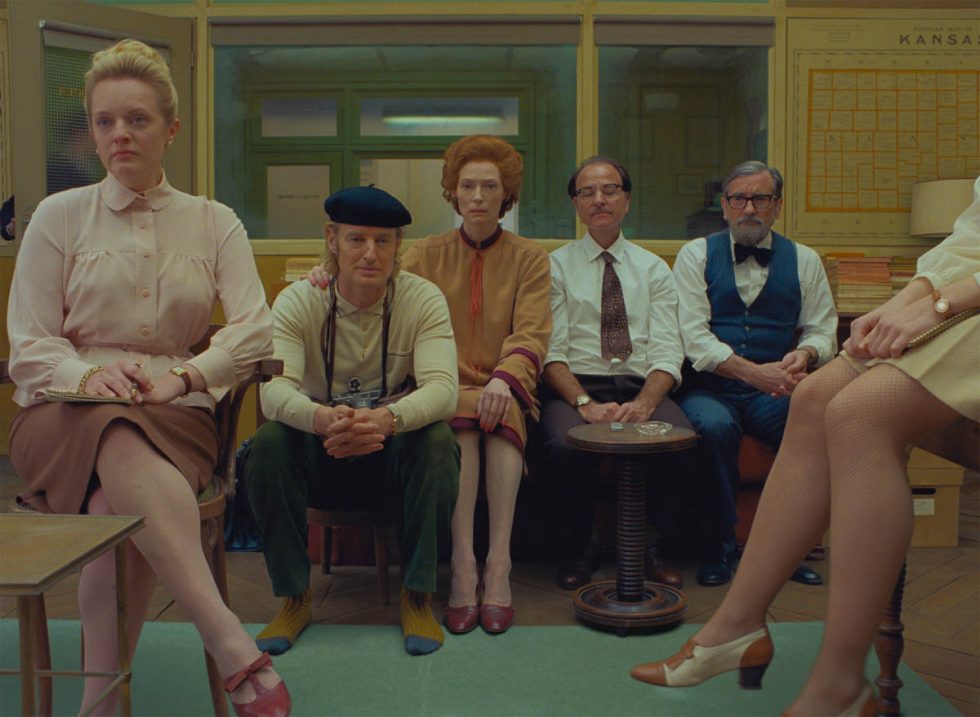 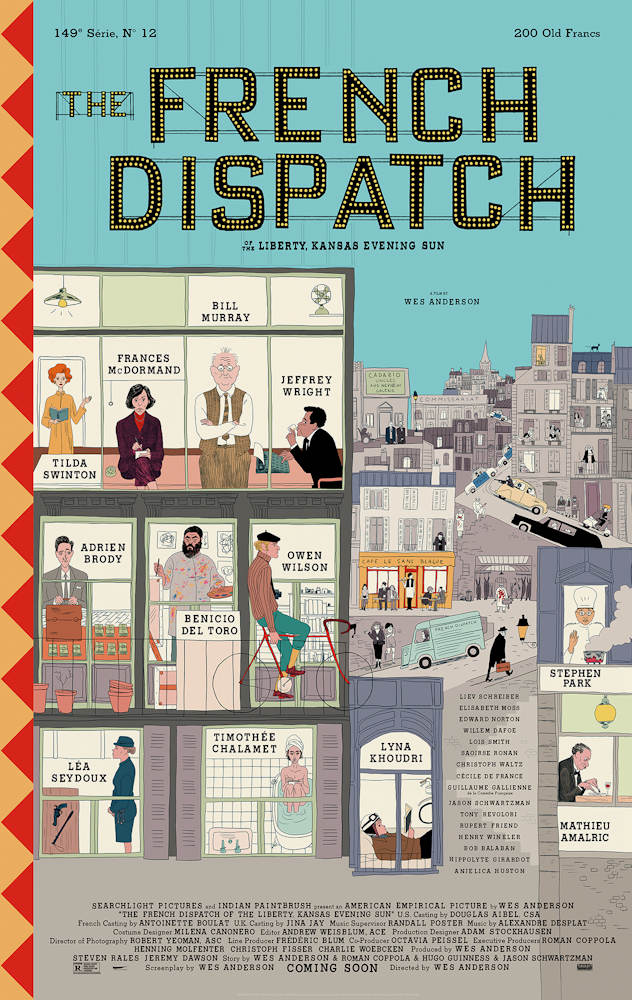 There is an audience for Wes Anderson films, and I’ll admit all day long it’s not me.

You have to imagine The French Dispatch (2021) as one of the glossy supplements we used to get in these daily home-delivered sheets of news and commentary called “newspapers” and every so often there would be a separate small magazine highlighting what we’re missing because we aren’t rich or cultured or fashionable. Lots of words, a handful of pictures, and exquisite storytelling that lets the magazine writers flex their MFAs.

The French Dispatch is set in the fictional town of Ennui-sur-Blasé (everyone chortle in Franch) as the foreign arts and culture supplement to the Liberty, Kansas Evening Sun. On this day, the  writers gather together to compile the final edition of The French Dispatch, per the final wish of its recently late editor, Arthur Howitzer, Jr. (Bill Murray)

I really enjoyed the first two stories.  In The Cycling Reporter, Herbsaint Sazerac (Owen Wilson) gives a travelogue retrospective on a day wandering the French town of Ennui-Sur-Blasé, home base for The French Dispatch, pointing out the architecture, the street life, the food, the people, etc. Fairly sure the marauding alter boys were my favorite callback. In a way, this one sets the stage for all of the stories and the framework for the supplement.

In the second story, The Concrete Masterpiece, J.K.L. Berensen (Tilda Swinton) narrates a retrospective of Moses Rosenthaler (Benicio del Toro), an artist serving time in an asylum for murder. Using a prison guard (Léa Seydoux) as his muse and mouthwash as his drug of choice, he creates outsider impressionist art that can only be seen in one place, and at significant expense. The art world flutters around him and fortunes are made and lost by a man with nothing to lose who simply does not care.

The following stories are a bit longer and feel wordier, which is odd for an arts and culture magazine because that’s totally their jam.

Revisions to a Manifesto is by Lucinda Krementz (Frances McDormand) who infiltrates and follows the “Chessboard Revolution”, a student protest about who can sleep in which dormitories. Becoming romantically involved with its leader, Zeffirelli (Timothée Chalamet) she risks her journalistic integrity by co-writing his manifesto. It was very French New Wave.

The Private Dining Room of the Police Commissioner is narrated by food journalist Roebuck Wright (Jeffrey Wright) on a talk show. Using his preternatural skill to recall every word he’s ever written, he tells his adventure to the Host, Liev Schreiber, about an exclusive invite to the police station to experience a rare and exquisite meal prepared by the auteur chef, Lt. Nescaffier (Stephen Park). They barely get past aperitives when a kidnapping breaks out and the ransom is Albert the Abacus (Willem Dafoe), underworld accountant. It’s complicated and longer than it has to be, but stylistically beautiful, and I could listen to Jeffrey Wright narrate the ingredients on a can of soda.

Wes Anderson is that clever friend we all have that is delightful in short bursts, and each of his four vignettes is delightful in its own way. However as one long movie, that clever veneer begins to wear thin, and no we’re not really interested in seeing one more dancing bear, thank you. The acting was strong and there wasn’t a single character I wasn’t interested in. The stories were told well enough, and they were compelling, but …

The visuals for The French Dispatch (2021) were incredible, the rotoscope animation, live actors posing as if photographs with practical effects mimicking thrown objects. It really was a marvel, and I absolutely don’t want to take anything away from Wes Anderson as a filmmaker, because his movies are filled with wonder and whimsy.

My whimsy bucket is shallow, and by story #3, I was ready to tap out.

I could appreciate the prose as dictated by the “journalists”. The flow and the cadence while all Wes Anderson had distinct characteristics of its authors. Herbsaint Sazerac was breezy yet descriptive, J.K.L. Berensen felt posh and condescending (as lots of art pieces do), the reporting of Lucinda Krementz was a frenetic staccato of frontline reporting, and Roebuck Wright peppered his story with character nuances and abstract irony. This is not a movie to find fault with because the acting is lousy or the color scheme is drab, or the story just doesn’t make sense.

The French Dispatch suffers from none of that.

It’s just a lot for someone, anyone looking for a quiet evening at the movies. This is a Wes Anderson movie for Wes Anderson fans and I’ve no doubt they’ll love it.

The French Dispatch is streaming now on the following services:
Powered by JustWatch