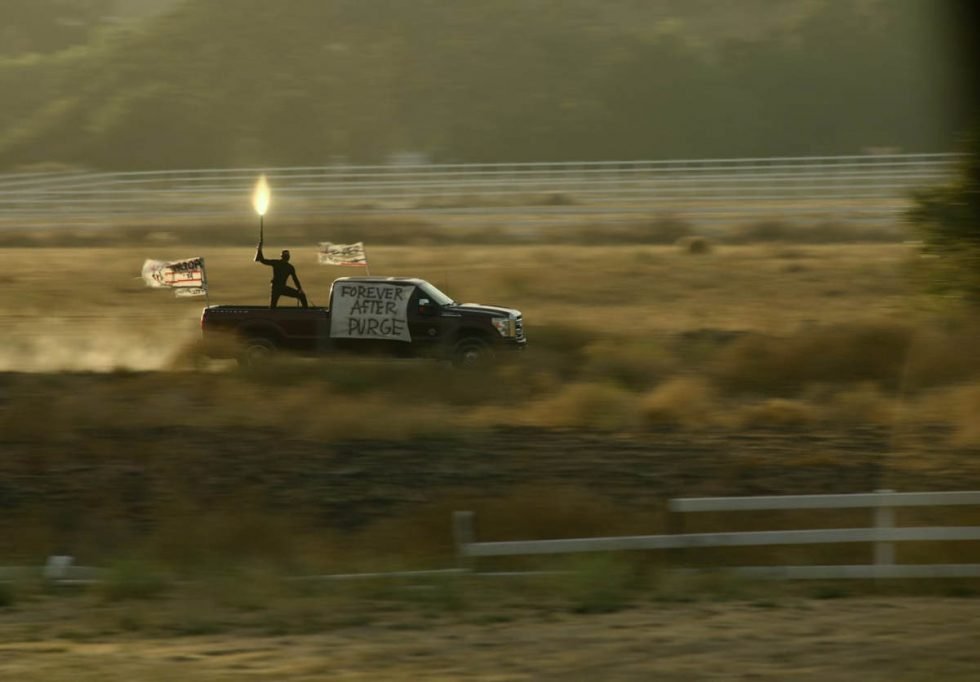 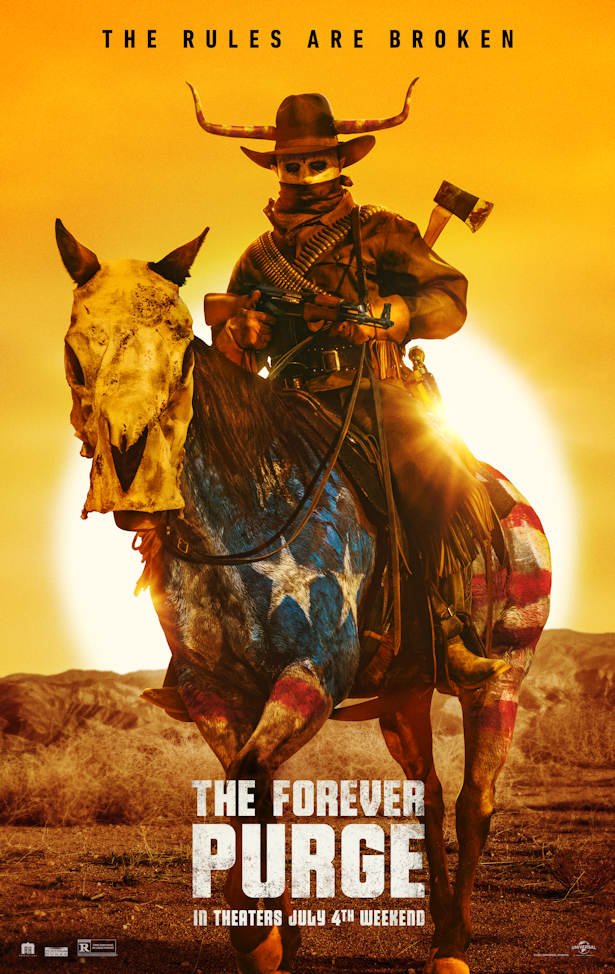 At times, painfully on the nose and yet deeply satisfying, The Forever Purge (2021) isn’t breaking any new ground but it does what horror films do best – shine a light on the painful present with a dim light towards a sorta hopeful sequel – I mean, future.

Adela (Ana de la Reguera) and Juan (Tenoch Huerta) are undocumented immigrants escaping Mexico by way of coyotes and tunnels, and entering an America openly despises them but desperately needs them. Adela works in a meatpacking facility, learning English and helping her fellow workers get a handle on life in America. Juan works as a horse whisperer and cowboy for the Tucker family, wealthy cattle ranchers who, although they’re breaking the law with undocumented workers, try to do right by them by paying a good wage with a little extra on Purge Eve to get safe. Less than a year after crossing the border, it’s time for the annual Purge, a uniquely American holiday reinstated by the political party in power, The New Founding Fathers, in which all laws are suspended for 12-hours. Now if you’re like me, maybe that means you race go-carts on the third floor of your high school. If you’re like the fascists, bigots, racists, and anarchists in the Purge Franchise, that means you get to murder anyone who doesn’t look like you without consequence. The wealthy and the fortunate barricade themselves behind fortresses of steel with heavy ammunition to protect their homes and families. Police and emergency services are suspended and everyone is on their own. Everyone else who isn’t participating and can’t get someplace safe is simply out of luck and faces certain death in the streets.

The day after when the world should return to normal, it doesn’t. What looks like a small band of disgruntled workers and an armed uprising on a single cattle ranch spreads large and small cities alike. All around the country coordinated attacks begin, extending The Purge into a Forever Purge bringing open murder and destruction into daylight hours, a departure from the franchise, overrunning police and military. Dylan Tucker (Josh Lucas), his pregnant wife (Cassidy Freeman), and his sister (Leven Rambin) with Adela, Juan, and other survivors make a run for the Southern Border. They have six hours to flee the warzone of Texas (of course it’s Texas) and survive the #foreverafterpurge.

It’s hard to believe this movie was shot almost two years ago, before the political events of early 2021, and before you complain that this review is getting too political, may I remind you that horror has always been political, and if this is too much, may I recommend something soft and cozy like Too Late (2021). Originally set to be released in July of 2020, where it could have potentially ignited contrary rhetoric of folks who would have been unable to see themselves in The Forever Purge, much like they whined about (The Hunt [2020]), in this new year it still strikes an uncomfortable note. Cowardly nationalists roam the streets in masks with high powered rifles and other normally illegal weapons, murdering, looting, and purging America of its “unclean” and “unworthy”. And there is no clear savior coming to save anyone as the government realizes it created a monster it cannot control. What should be entertainment (albeit of the dark, dystopian, twisted variety) feels likes a prognostication, with room even for another installment and hopefully a timeline where America (the good kind where we all get along) survives.

There are no wilting violets in The Forever Purge because it’s Texas and everyone knows how to shoot stuff with crazy accuracy. There are no liabilities or weak characters who serve as perpetual targets and there are no lulls once the action gets going. I found myself oddly energized as Adela and Juan fought smartly and as viciously as you would expect folks who’ve spent every waking moment fighting for their lives. I have zero problem telling you I was into it, cheering my little band of survivors and watching nationalists driving around in professionally painted vans that say “Purge Purification” get faces full of lead. It was cathartic.

Action Horror is a tough genre to maintain because it relies heavily on violence and deeply unlikable characters. The Forever Purge met the challenge head-on and conquered. The body count is high, there are explosions everywhere, and no one is safe.

This isn’t a movie for you if you don’t like violent gun confrontations and you certainly won’t like it if you align with the New Founding Fathers of America, so this movie is for the rest of us. Grab your popcorn and your frozen soda, find the best seat in a theater (if you’re ready for one), and watch a social experiment eat itself into oblivion.

The Forever Purge (2021) is Rated R for swears (in English and Spanish), uncomfortable discussions about who belongs where, lots and lots of people getting shot, people getting punched, garroting, and El Paso, TX getting blown up.

The Forever Purge is streaming now on the following services:
Powered by JustWatch