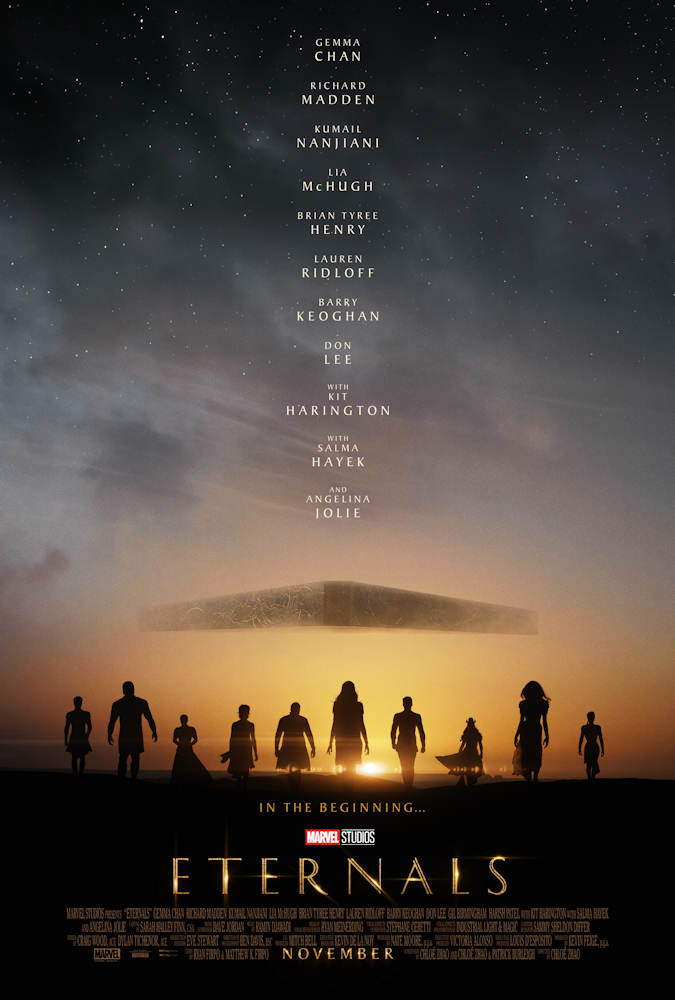 Eternals (2021) feels like it wanted to be an epic space adventure with immortals sent to save humans from everything but themselves. Instead, we got Eternals.

The Eternals were 3-D printed by the Celestials, put into a giant arrow, and fired across the galaxy to Earth 7,000 years ago to prevent the spread of Deviants, insectoid flying dinosaur things that eat humans. Eternals have different abilities, like shooting fire or mind control or manipulating matter. We know they’re the Eternals because they refer to themselves as such repeatedly throughout the film. They remain on Earth long after their mission has completed, waiting to be called home to their origin planet, Olympia (sure), so Kingo (Kumail Nanjiani) becomes an actor whose talent spans literal “generations”; Gilgamesh (Don Lee) and Thena (Angelina Jolie) move out to the desert; Then a few, Makkari (Lauren Ridloff), Ikaris (Richard Madden), and Phastos (Brian Tyree Henry), we completely lose track of.

I would like to have known how Phastos survived as a Black Man for 5,000 years. That’s a movie that needs to be made.

Just as Sersi was getting used to falling in love with a human (Kit Harrington), a human colleague at the Natural History Museum in London, Deviants spontaneously re-emerge. Reacquainting themselves with each other across lifestyles, cults, and deliberate isolation, the Eternals (see how silly it sounds to hear over and over again?) join forces and it turns out to be much harder to reconnect than they anticipated. Then there’s the matter of an unexpected death, who caused that death and why, and thus the raisons d’être of both Eternals and Deviants are eventually revealed.

Is there a twist? Sure, and it fills perhaps 25 of the 157 minutes of Eternals. If you think that sounds long, just wait until you realize that you’re still plodding through the backstory after 90 minutes. Writer-director Chloé Zhao has put a lot of everything into her first superhero movie, and maybe without the suits and ships and CGI, it could have worked. If you want a story about a family dynamic complicated by exile, isolation, and betrayal, I’ve no doubt Zhao is the go-to person for the job.

But this isn’t it.

The story and characters are a lot to go through and when the dust settles, you’re left wondering how much of it matters. I can’t tell you because spoilers, but you’ll be irritated.

The ship, the costumes, the CGI, the stroll through 5,000 years of humanity feels with the dramatic dialog and heartfelt talks – what’s the professional word I’m looking for? Oh right – hokey.

Eternals suffers from more than its share of exposition, and if we had to sit this film at a wedding reception, it would for sure be at the table with Ang Lee’s The Incredible Hulk (2008). Despite the action and pyrotechnics, it feels empty. There are too many characters to connect with, too much backstory to feel present, and so much talking. These are immortal, extraterrestrial beings that spend a lot of time getting on each other’s nerves, and not in the jokey Avengers way. It’s supposed to be endearing, but it comes off like Thanksgiving with your in-laws. There’s also a love scene that serves zero purpose except to make you check your watch and sigh. In a movie as long as Eternals, it’s definitely one of the things I would have cut. There are flashback glimpses of time spent with cultures, and Sprite’s devotion to storytelling (and her main crush) gives a hint as to humanity’s supposed mythology. I would have cut those scenes too, because they feel bloated in an already overlong movie, killing the pacing and momentum for what should have easily been a lot of flying, fighting, and flashy weapons.

Hayek’s Ajak is like other recent roles she’s played, that of peace-keeping mother, which would make sense if they all hadn’t split up for a few millennia. Madden’s Ikaris never develops a personality, and I would have happily spent eternity shoving illusions of Sprite into lockers. This is the cost of ten characters and their baggage all introduced into a single movie that feels both slow and rushed. Can you imagine the MCU dropping The Avengers (2012) without Iron Man (2008), Thor (2011), or Captain America (2012), and then trying to shoehorn the introductions of those three strong personalities into one film? The MCU would never have gotten off the ground.

Eternals would have played better as a six-episode series on Disney+ to set up an eventual 150-minute movie we may have enjoyed seeing, but I did not enjoy this movie.

There are two post-credit scenes, and the credits take close to ten minutes, so do yourself a favor and after the first one (right after the cast credits roll), go pee, and then come back for the second scene. Then come here and tell me what they mean.

Eternals is streaming now on the following services:
Powered by JustWatch