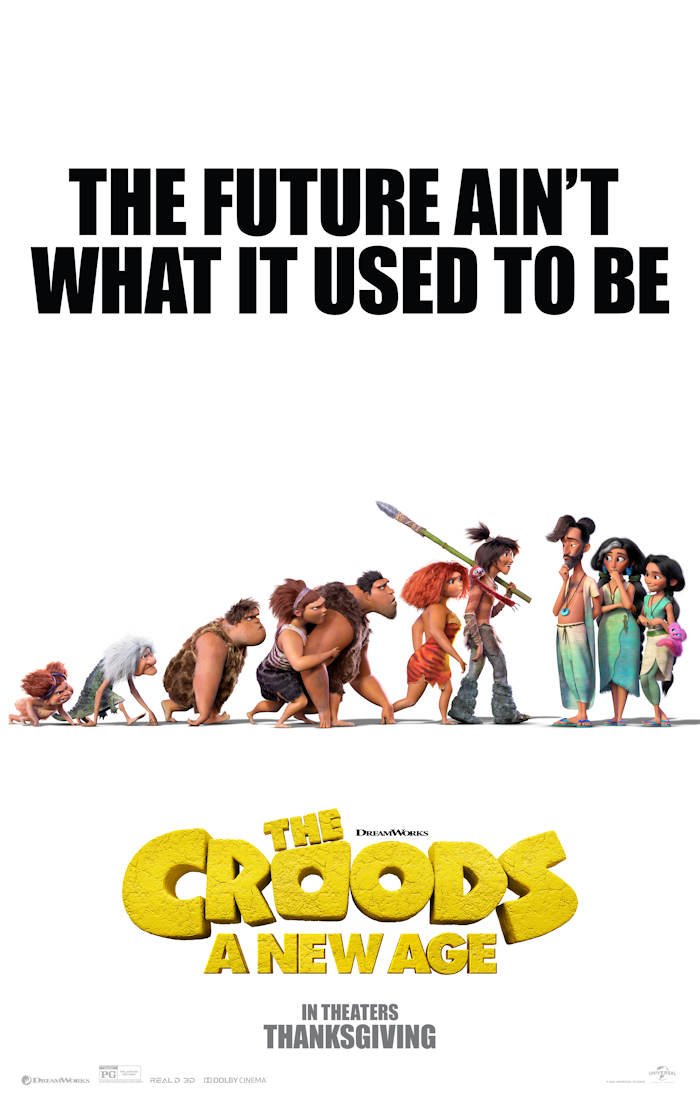 With the new year just around the corner and a worldwide pandemic still raging, many are doing their best to forget 2020. From being locked up with our families to missing out on being with friends and loved ones for holidays and celebrations, the new year simply can’t come fast enough. And that goes for movies too — 2020 will be remembered as one of the most anemic years in cinema history with no demographic spared. Movies are an escape, a place where we can imagine being someone else, being somewhere else. Sadly, judging from this year’s releases, that’s no one nor nowhere good. From Doolittle in January to The War With Grandpa which released just a few short months ago (and, beyond words, claims the second highest film of the pandemic), kids struggled to find quality content to take their attention away from the social distance playdates and virtual schooling. So one could only hope that The Croods: A New Age, a sequel to the 2013 hit film, would change the tide.

Looking back at the first film which followed The prehistoric Crood family as they were forced from their home, it ironically symbolizes the dark times that many are facing today. It’s about a family that lives most of their life trapped in a cave, only going out for food who are facing what they believe is the end of the world. It’s a race to Tomorrow, a place that they hope will be better than today. Sound familiar?

Grug (Nicholas Cage) and his pack return in the sequel that finds Grug fearing his teenage daughter Epp (Emma Stone) going on out on her own with her teenage crush, Guy (Ryan Reynolds). Alongside these three are the rest of the Crood clan, including Grug’s wife, Ugga (Catherine Keener), son Thunk (Clark Duke), and mother-in-law, Gran (Cloris Leachman).

Still searching for Tomorrow, the Croods stumble upon a paradise inhabited by the Betterman’s. Get it? Better man. Yep, this is the type of tired humor the film spews during a longer-than-it-feels 95 minutes. It turns out that Hope (Leslie Mann) and Phil (Peter Dinklage) Betterman and their teenage daughter, Dawn (Kelly Marie Tran), were best family friends with Guy’s family before his parents drown in tar. Since that time, the Betterman’s have turned their land into an oasis complete with an elevator, working toilet, and other modern amenities. For primitive cavemen like the Croods, it’s a home unlike anything they could ever imagine. But just because it’s bigger, it doesn’t mean it’s necessarily better. And just because they reside behind secured walls, it doesn’t mean they’re safe.

Instead of expecting ferocious prehistoric animal attacks in the wild, the Croods face an enemy from within their four walls with the Betterman’s attempting to evicting the abhorrently behaved Croods and break up Eep and Guy for the betterment of Dawn. Things turn from bad to worse when Grug fails to follow Phil’s orders to not eat the bananas.

The Dreamworks-produced sequel is another example of how studios not named Disney or Pixar struggle to create memorable films for both children and and adults. Yes films like Despicable Me have succeeded, but for every Despicable Me, there are ten Free Birds. Despite a wealth of talent in Hollywood, it seems that other studios can’t create an original, fun, humorous, and heartwarming story relatable for all ages. Here we are again with yet another non-Disney film that is barely entertaining for children.

Much of the disappointment falls on the writers. The film forgets Guy’s companion sloth, Belt (Chris Sanders). A standout in the first film, the adorable Belt and his new crush, Sash (James Ryan), are merely bystanders this time around. Phil Betterman is written to be so boring and unlikable that the script is unable to make him a character worth rooting for in the end. And shame on a script that fails to capitalize on Ryan Reynolds’ wit. Not leveraging this skillset in 2013 when Reynolds was still generally unknown is acceptable, but since that time, Reynolds has proven that there is no actor better adept at deadpan than him. One even wonders if he were allowed to write (or re-write) the film, how much more entertaining this film would be for all ages.

The Croods: A New Age does offer up a few laughs and like the first, offers a positive message of parents wanting to protect their children. Disappointingly, however, many of the laughs are wasted on the extremely entertaining trailer. Like a trap that the Croods get stuck within early in the film, the trailer feels as if it’s trapping viewers into a film that never lives up to expectations. Releasing Thanksgiving weekend in the theaters and then on demand in December, parents would be wise to save their hard-earned money and wait until this hits a streaming platform.

The Croods is streaming now on the following services:
Powered by JustWatch