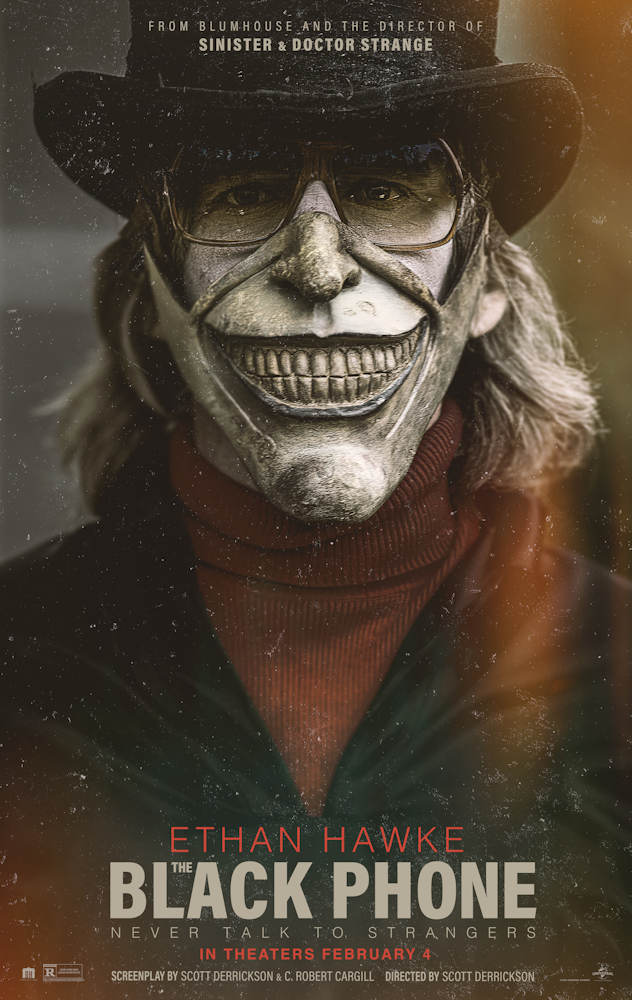 Any day of the week, give me a movie that has a villain with an unknown backstory and a plucky kid who relies on his clever brain. The Black Phone (2021) feels like nostalgic horror without the classic tropes and these are exciting times.

Life was different in 1978. Lots of fresh air, outside activities, casual domestic violence, and a lot of missing kids. Finny Blake (Mason Thames) is a kid for whom not a lot goes right. He’s a solid baseball player, but the other team has a better hitter. He’s got a good relationship with his sister, Gwen (Madeleine McGraw), but his dad is an abusive alcoholic since the death of their mother and they bear his belt a lot. His small town is experiencing a rash of unsolved missing kids and while it’s a problem, it’s the 1970s and parents aren’t exactly keeping their kids from running the streets.

Then one day, in an act of selfless charity, Finny falls prey to The Grabber (Ethan Hawke), the anonymous kidnapper who doesn’t hold for ransom or fame. There’s something wrong with him, as seen by the myriad masks he wears, depending on the mood or personality driving. We only see his face twice, and both times are followed by blood. In the soundproofed cement room where Finney is held, furnished only with a mattress bolted to the floor, there is a disconnected black phone on the wall. The Grabber thinks he hears it ring, but Finney definitely does, and the voices on the other end are desperate for him to hear what they have to say. If you could learn from the dead and all of their mistakes, might you have a chance to escape their fate?

Writers C. Robert Cargill and Scott Derrickson don’t waste a lot of time following The Grabber around in his day-to-day life because The Black Phone isn’t about him. There’s no need to humanize a monster because you can’t reason with evil. He’s the catalyst in Finney’s journey from mousy kid who can take a punch to a potential badass.

The Black Phone feels fresh in the way many horror movies strive for. Based on the short story by Joe Hill, the movie adaptation finesses the tale into something subtle and more relatable. The Grabber isn’t a large loud man who would stand out in a carnival, the timeframe is shifted to the mid-70s, and the introduction of the various creepy masks adds a distinctive and menacing flair. Gwen, not Susannah, is his younger sister, not older and her role is pivotal rather than filler. You won’t often hear me say this, but this adaptation is an absolute glow-up.

Yes, there are jump scares, but in Derrickson’s hand, the camera holds the shot so it isn’t just a loud phone ringing in a silent house or a cat jumping out of the closet. It’s a lingering terror that has a purpose. That scare is meant to imprint upon you and add to the headcanon in your mind, building the story opposite of the way jumpscares are quickly forgotten. These aren’t momentary releases of pent-up tension but a signpost on a steady climb of another tier reached.  The deep fear isn’t from ghosts, though they are part of the equation, and there isn’t a lot of blood. This is a horror movie borne from fear of the unknown – of Finney’s fate, of the barely restrained rage of The Grabber, of the unseen but very tangible torture of the murdered kids. It’s all neatly and tightly wound tension, and the payoff is well worth it.

Gwen is probably the most refreshing part of The Black Phone, this new star of the “weird kids in peril” genre. For as sweet and protective as she is, the dreams she has notwithstanding, she has a mouth like a sailor on leave, and mad props to Madeleine McGraw for making all of that sound as natural as reciting the alphabet. Gwen is the sister you want in a fight and the one fighting for you. She’s not quite a Final Girl, not in this movie, but she easily wipes the floor clean of the “annoying baby sister” trope and good riddance.

Delayed due to the pandemic, horror fans worried that the constant push of The Black Phone meant it wasn’t as strong a film as Blumhouse Productions had hoped, especially with a marquee talent like Ethan Hawke. We were premature in our unease. The Black Phone is well worth the wait and definitely multiple viewings.

The Black Phone (2021) is the rare kid-centered movie that is Rated R for terrific scenes of terror – bloody broken kids, nose candy, incidents with drunks wielding belts, an ax to the head, a broken neck, and a schoolyard fight worthy of an MMA cage.

The Black Phone is streaming now on the following services:
Powered by JustWatch