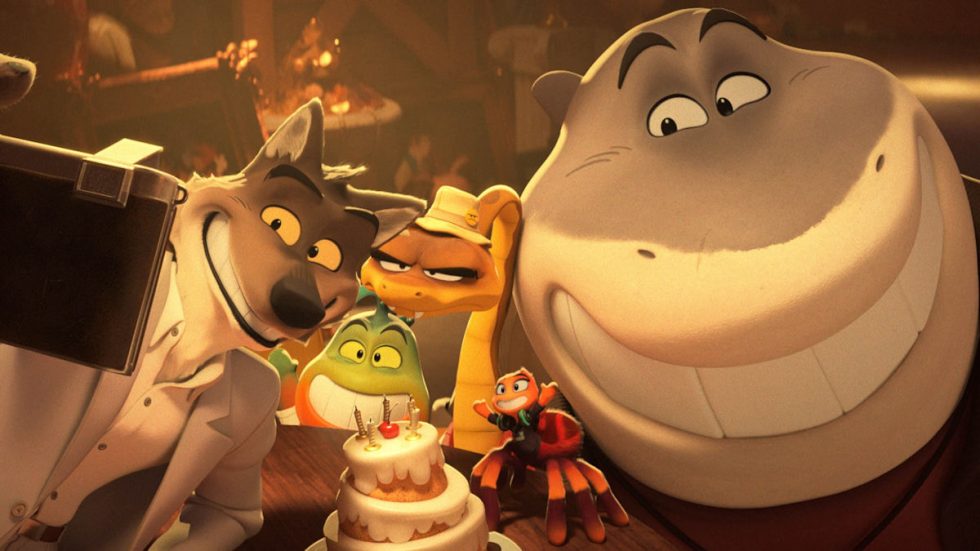 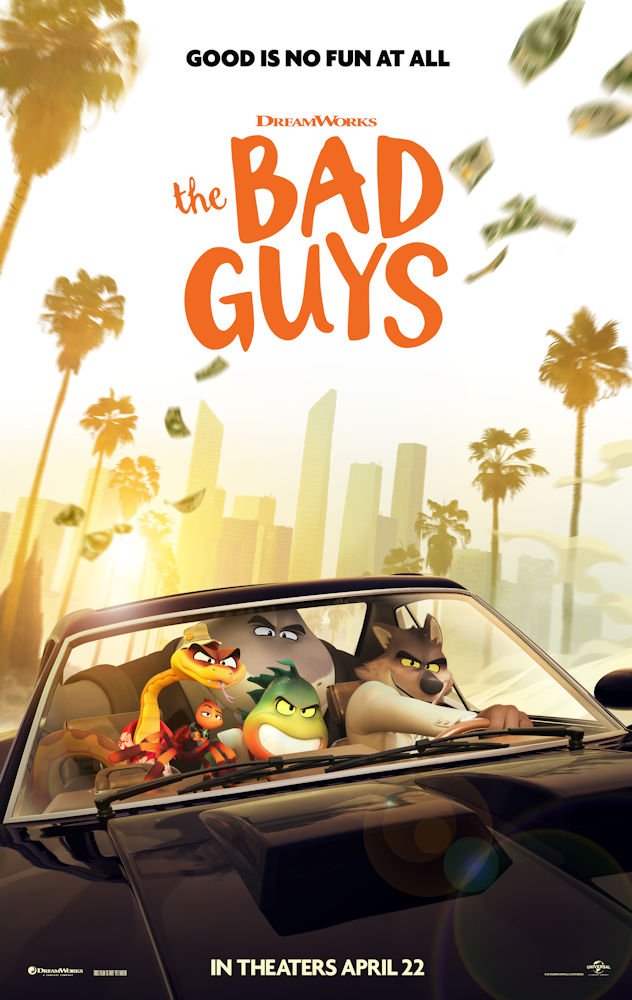 Career criminals try to outfox a philanthropist to prove they are redeemable to everyone but especially themselves in The Bad Guys (2022), a Dreamworks Animation production.

Wolf, Snake, Shark, Piranha, and Tarantula are accomplished criminals who live the dream of conquering the next heist. Banks, art, pickpocketing – no crime is too small. Wolf (Sam Rockwell) is the charming leader, mastermind, and architect, and there is no situation he can’t talk or drive his way out of. For underhanded treachery, Snake (Mark Maron) sinks to new and exciting ways to be underhanded. Shark (Craig Robinson) is the master of disguise, whether a security guard or a pregnant woman, and it’s fantasy so it works. Piranha (Anthony Ramos) has anger issues and toxic nervous flatulence. Tarantula (Awkwafina) is a master hacker. Together they are wild, wealthy, and two steps ahead of the apoplectic Police Chief, Misty Luggins (Alex Borstein). After their latest heist goes sideways, Professor Marmalade (Richard Ayode), a philanthropist who coaches the world through hardship with suffocating amounts of love-bombing, convinces the Governor, Diane Foxington (Zazie Beetz), to hand the criminals over to him for rehabilitation. When a larger heist goes down, it’s easy to imagine who the main suspects are, and The Bad Guys have to both work together and against each other to uncover the real mastermind and clear their new gooder name.

This is a movie that shouldn’t work, and if you’re under 10 years old, it might not. The Bad Guys has a lively pace that may be too fast for littles because the physical humor works hand-in-hand with the verbal asides. However, once vested in the clever little story, all age-appropriate ages could easily enjoy it. I’m not saying the story isn’t thin in places, or that the story twist isn’t telegraphed a mile away, but I am saying the personalities of the individual characters are a bright spot in what would otherwise be another turning of the worm story. You can’t help but smile when Wolf, having zero qualms about stealing a loaded purse from a little old lady, can’t keep his tail from wagging when he’s complimented for being a Good Boy. It’s ridiculous but cute. Somehow this movie makes you feel giddy with a tail wag, betrayed when Snake thinks his friends have deserted him, or in on the heist when the sunglasses come on and the music thumps.

Wolf is ridiculously cool and being voiced by Sam Rockwell absolutely doesn’t hurt. He’s smooth, an impeccable dresser, and while his heists are criminal, they aren’t mean-spirited. He’s a Robin Hood kind of criminal, just skipping the part about giving to the poor. The Bad Guys are a band of friends who happen to work seamlessly as a well-oiled criminal empire. We should all be so lucky. Their personalities compliment each other in balanced, even ways that make sense. This isn’t a movie that’s meant to be groundbreaking in its animation. It’s entertainment and you’re supposed to come out having Learned a Lesson, without having been beaten over the head with it.

Based on the children’s graphic novels by Aaron Blably, The Bad Guys series explores common perceptions and stereotypes, and the herculean efforts to change an entire public mindset when past performance is a constant reminder. The main characters are dangerous predators and no matter what they do or how good they appear, the fear of their baser instincts will always be in the forefront. We’re meant to see past the outside and into the heart, and The Bad Guys will absolutely steal your heart if you let them.

The Bad Guys (2022) is rated PG for cartoon capers like car chases over blown-out bridges, down steep stairs, and through the iconic LA Basin, visual noxious farts (I believe coded as “rude humor”), an over-zealous cop, and hordes and hordes of mind-controlled rodents.

The Bad Guys is streaming now on the following services:
Powered by JustWatch