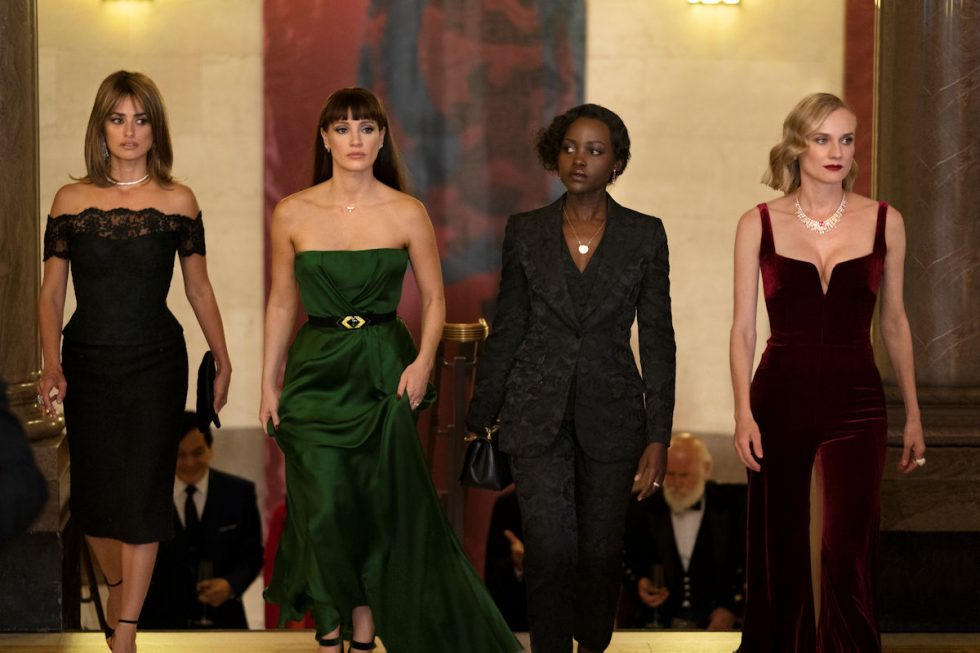 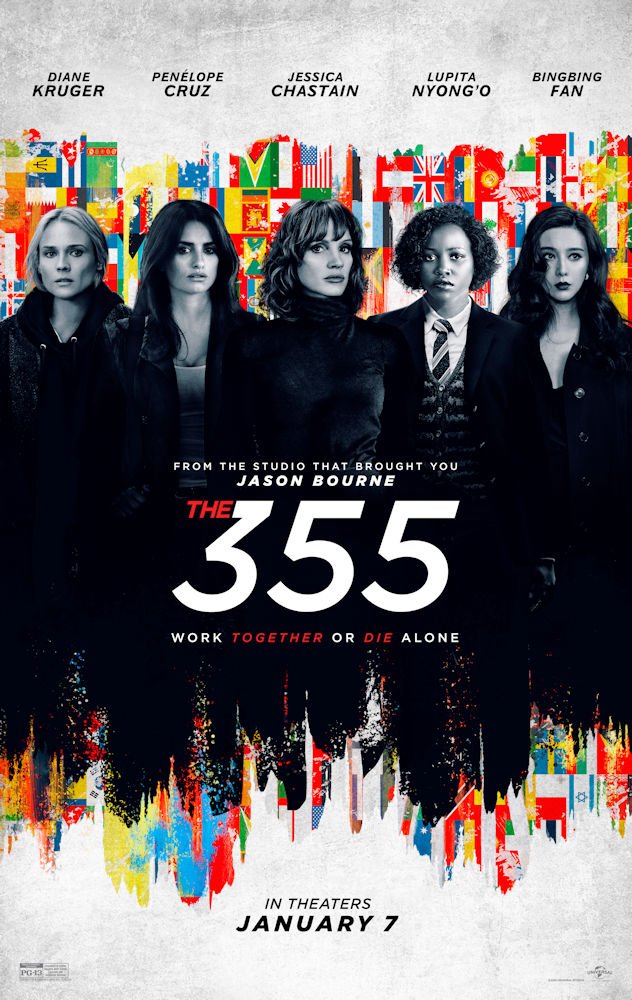 If you’re looking for strong action, witty dialogue, and strong and smart female characters, The 355 (2022) is not the movie for you, but please keep reading.

Mace (Jessica Chastain) is a CIA operative tapped to retrieve a complicated piece of technology from a contact in France. The “drive” can bring down planes, disrupt power grids and destabilize nations, all in a case the size of a smartphone, but it’s complicated because no one can duplicate it ever. In a complicated cover story involving her best friend and partner Nick (Sebastian Stan), they arrange a meeting to exchange the tech for 3-meeleion-dollars. After a complicated bait and switch, there’s a complicated chase through the Parisian subway. It gets more complicated when Mace brings in her MI-6 UK colleague Khadijah (Lupita Nyong’o), who uses complicated surveillance equipment leading them to another complicated chase with a BND German operative (Marie Diane Kruger) with an unwilling hostage/witness/psychologist working with the Colombian government, Graciela (Penelope Cruz), who makes things complicated because she just wants to go home to her family. As several world spy agencies converge on this one piece of hardware, a melting pot of international lady spies must work together to save the world from certain destruction.

Spy thrillers shouldn’t be this overtly “complicated” and because The 355 is trying so hard to be a girl band of quick-thinking super spies in stilettos and pantsuits, the entire picture suffers for it. First, these agents don’t work well together. At all. Mace, Marie, and Khadijah are damaged lone wolves with singularly focused wills and egos getting in each other’s way. With so many personalities and traumatic backstories, the exposition of character flaws becomes a contest of who has the most psychological damage – you know, because women can’t be good at their jobs unless they’re broken.

Lots of cellphones meet their end in this movie, so expect lots of boots on screens.

They wouldn’t blow every opportunity to rid themselves of the bad guys. Every. Single. One.

The only character with any authenticity is Graciela, and frankly, she’s the best part of The 355. She provides the moral center, the desire to be the change she wants to see in the world, and the sole island of humanity surrounded by the soulless sharks, Mace, Marie, and Khadijah. She really doesn’t want to be there and you can feel her pained expressions of exhaustion right in your very soul, because you don’t want to be here either. She is out of her depth but along for the ride, and whether not she grows as a character doesn’t matter because this isn’t her story arc.

Directed by Simon Kinberg, he of 2019’s Dark Phoenix (also with Jessica Chastain), The 355 has the heavy-handed touch of a director who wants you to not only understand the context of the scenes, but experience the visual cues. He’s taken great pains to show you every word of that screenplay by Theresa Rebeck, which spotlights the flaws of both direction and script. The 355 is 85% action, so expect lots of shooting, punching, kicking, as well as the occasional explosion, and all of it is lightly peppered with technobabble and clichés masquerading as threats. The fights don’t look natural, but kudos for the manners of everyone waiting their turn to be punched or shot. That’s a director (Kinberg)/fight coordinator (James Embree) issue, whether for the sake of safety or inexperience, the hand to hand was likely one of the more disappointing aspects.

There isn’t enough plot to flesh out the story, and there’s way too much action to make the story watchable. You may also have lingering questions, like if they’re sort of (kind of) being hunted, where are they finding money for tech and weapons and guns, oh, and gowns, because “I have contacts” doesn’t fly and is super-hard to swallow when weighed against literally everything else in the movie.

The 355 isn’t even dumb fun. It’s exhausting noise considering the caliber of actors. They deserved better.

You’ll probably read this another dozen times, but The 355 refers to an American Revolution female spy, referred to as Agent 355, whose identity was never revealed. It’s explained in the last 2 minutes of the movie but by then you likely won’t care. It won’t matter anyway, because I don’t believe we’ll be seeing any more of these.

The 355 is streaming now on the following services:
Powered by JustWatch