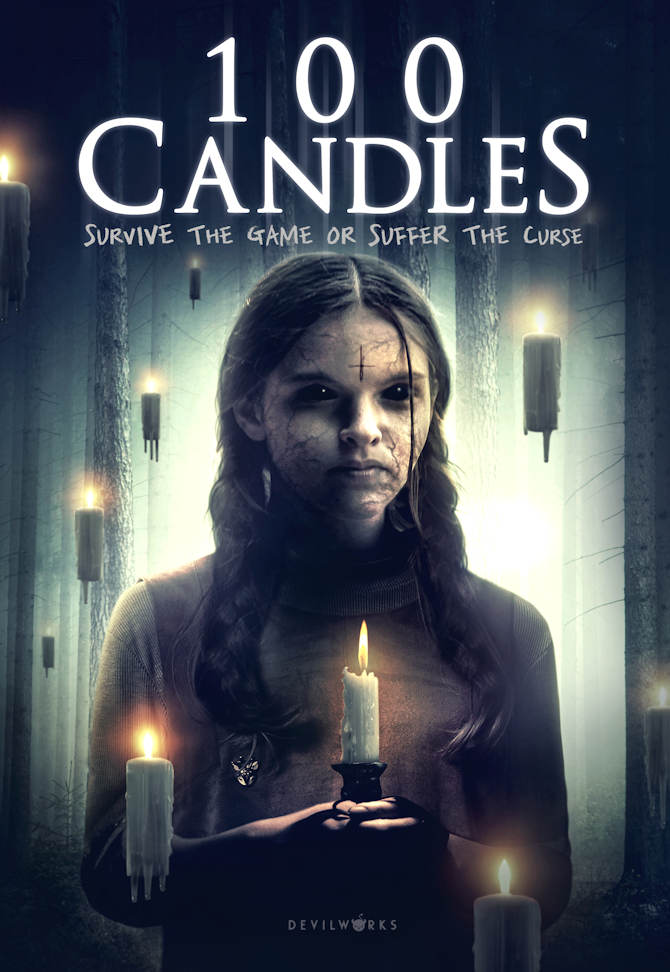 If the anthology format of The 100 Candles Game (2020) looks familiar, that’s because last year saw the release of Nightmare Radio, with 8 different short films loosely nestled into the main tale.

4 friends, I mean I guess they’re friends gather in a fire hazard of 100 lit candles. Erica (Magui Bravi) and her three friends, Kristy (Clara Kovacic), James (James Wright), and Alex (Agustin Olcese) take turns telling ghost stories before approaching a mirror in another room to blow out the candle. They have to do this 100 times. Fortunately, we only have to endure 8 of them, and half of them are really worth watching. Unfortunately, the wraparound tale (directed by Guillermo Lockhart) is mostly a lot of screaming and swearing with not much of a story.

Sizzlers are A Little Taste (directed by Victor Catala) is about encountering witches in the woods, When Demons Die (Daniel Rübesam) about a man protecting a child from the undead surrounding their homestead, The Visitant, a trimmed 2017 short by Nick Peterson) with Amy Smart about a faceoff between a demon (Doug Jones) and a terrified mother, and Blight (Brian Dean) is a priest and an exorcism story with a twist

Fizzlers are Black Eyed Child (Tony Morales) about a woman trapped in her home by – you guessed it Black Eyes Children. No reason why, she just is. Buried Alive (Oliver Garland) was entirely in Spanish, so the impact of the dialogue was completely lost. Maybe it was a revenge story, but without subtitles, I may never know. This isn’t the first time this anthology has put in a foreign language film without subtitles and it wasn’t cool during A Night of Horror: Nightmare Radio (2019), either. Blight (Brian Dean) is a priest and an exorcism story with a twist, and Drip directed by Christopher Quest about a woman who finds pictures taken of her on her phone after she movies into a new place. The flashbacks as well the overall story are devoid of dialogue or contest so again, we’re just left to watch things happen.

I appreciate producer Nicolás Onetti compiling short films we might otherwise miss but I wish a little more effort was put into the wraparound tales and the overall quality of the shorts themselves. I love short and microfilms and it’s not easy to get ideas across in a short amount of time, but they have to be more than dark images and creepy kids. There needs to be a story there.

Some standouts in 100 Candles Game, but overall disappointing.

The 100 Candles Game (2020) is unrated, but it’s direct to video on demand, so call it a soft R with lots of blood, stabbing, demons, child endangerment, creepy kids, exorcism, lots and lots and lots of swears

The 100 Candles Game is streaming now on the following services:
Powered by JustWatch