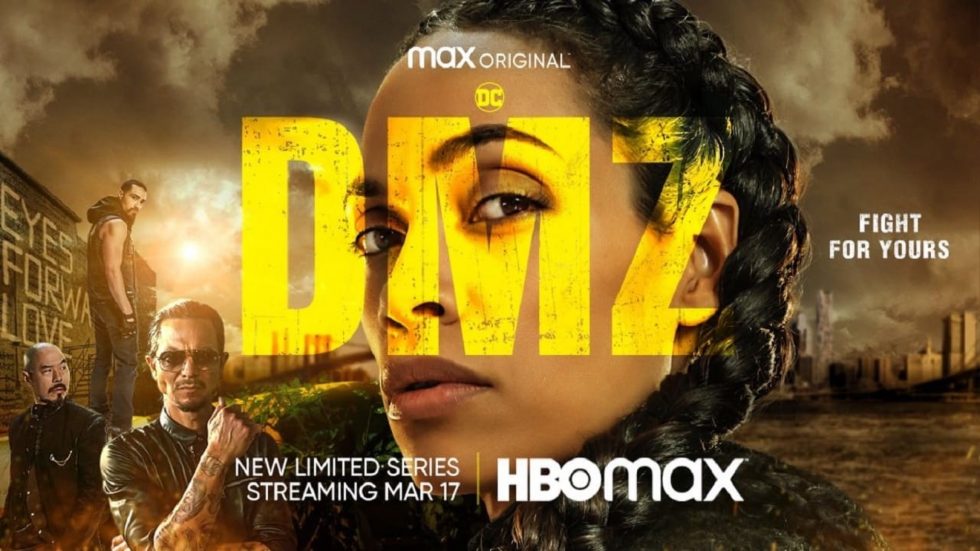 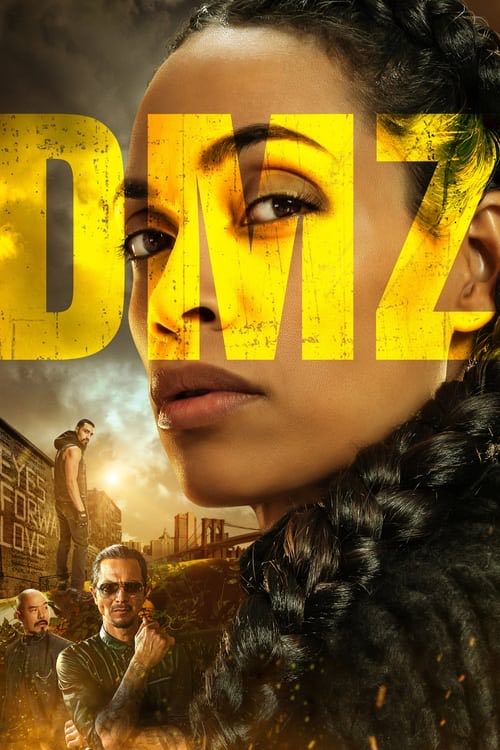 At SXSW 2022, HBO Max debuted a new series, DMZ, of dystopian angst set against a backdrop of a stateside Civil War, the likes of which very few Americans can understand. After the first episode, you may not understand any better, either.

In the not too distant future, like maybe next year, Manhattan Island is a demilitarized zone during the Second American Civil War. Those that could, got out. Those left behind were caught between the armies of the United States to the East and the Free States of America, a successionist group occupying lands to the West. The Island is a hardscrabble place, low on food, medical supplies, and hope. An uneasy peace is maintained by a coalition of several gangs, all looking for a way to gain control of a wasteland and be king of the heap.

Rosario Dawson, plays Alma, a nurse working the border US/Manhattan border and desperate to find her son, Christian. They became separated on Evacuation Day, six years prior, while fleeing the war, and Manhattan, specifically, and she’s been searching for him ever since. The one place she hasn’t looked is the DMZ, and with no legal way in or out, she has to negotiate with smugglers for a barely safe passage through abandoned subways to even begin her search. She has 24 hours to locate her son and make it back to the checkpoint, or risk being left behind for who knows how long. As she picks her way across the island (following what internal beacon, we have no idea), she encounters the residents just trying to survive. She meets Rose (Mamie Gummer), a clinic doctor, and gets her to finagle her way to the patient files to see if Christian was recently treated there. I suppose if there is one thing we can continue to count on as the world descends into oblivion, it’s mounds of administrative paperwork. Benjamin Bratt plays Parco Delgado, leader of one of the island gangs, who is running for governor of the DMZ. Based on the single episode, it’s hard to say if he’s crafty or cunning since as presented, he’s just a run-of-the-mill silver-tongued gang leader. There’s no depth to him, no reason to either like him or hate him, other than he’s a gang leader and gangs are bad.

I think that’s the crux of the issue with DMZ. The bombed-out backdrop engenders more emotion than the characters, who feel very shallow and unfinished. Everyone is distilled to exactly one emotion – Alma is mother’s love, Parco is ambition, Odi (Jordan Preston Carter ) is hope (I guess), Rose is desperation. Not one of them gives you reason to want to tune in further, and it’s not the fault of the source material. This adaptation is empty.

For fans of the original comic series, you’ll notice a narrative shift. This isn’t the story told through the eyes of journalist Matty Roth, embedded in the DMZ to report on the humanitarian issues facing its residents. This Ava DuVernay-directed series is driven by a nurse and mother, and whether or not it’s a shift that resonates with viewers who aren’t me remains to be seen. This is a detached version of strong motherhood. Alma is tough, but still compassionate enough to follow through on her promises to her patients and those weaker individuals around her. Stoic is not enough of a personality trait to carry a series.

If my description of DMZ sounds like a patchwork of ideas, themes, and horrific images, you’ll forgive me. This pilot gave nothing in the way of background that wasn’t a few rapid-fire sentences, so if you’re not familiar with the Vertigo series written by Brian Wood, you’ll be as lost as I was. I’m guessing all will be revealed as the remaining three episodes play out, but without a scorecard, it’s hard to understand the current situation or why everyone is treated like human garbage. That disconnect is woven throughout the episode, and you will have to weigh if it’s worth sticking around for the rest or the story, with no guarantee it’ll ever come together.

For the first episode, a mere 59 minutes, it felt much longer. Maybe it’s the current climate of the world, maybe personally, I’m just weary of despair as an entertainment commodity, but that first episode dragged. For lovers of bleak dystopian stories, DMZ might be right up your alley: no one is happy, hard choices are made and not necessarily to the good, and people die a lot.

There are very touching moments, like young Odi who finds himself on his own and navigating a place he is mentally ill-equipped to handle. Giving pep talks to his pet guinea pig while receiving counsel from his grandfather, it’s suggested Odi’s life might not be too much different were there not a war going on. He latches on to nearly every adult figure who shows kindness, and it’s neither endearing nor sad. It’s a strange disconnect. I don’t know if that sentiment was intentional, but it sure was depressing.

DMZ (2022) is a limited-run series on HBO Max, managing just four parts of war, death, despair, and constant struggle, and debuted during SXSW 2022 as part of its Episodic series. It is rated TV-MA for images and experiences of active war, people getting shot, gang violence, people getting punched, and dead bodies.