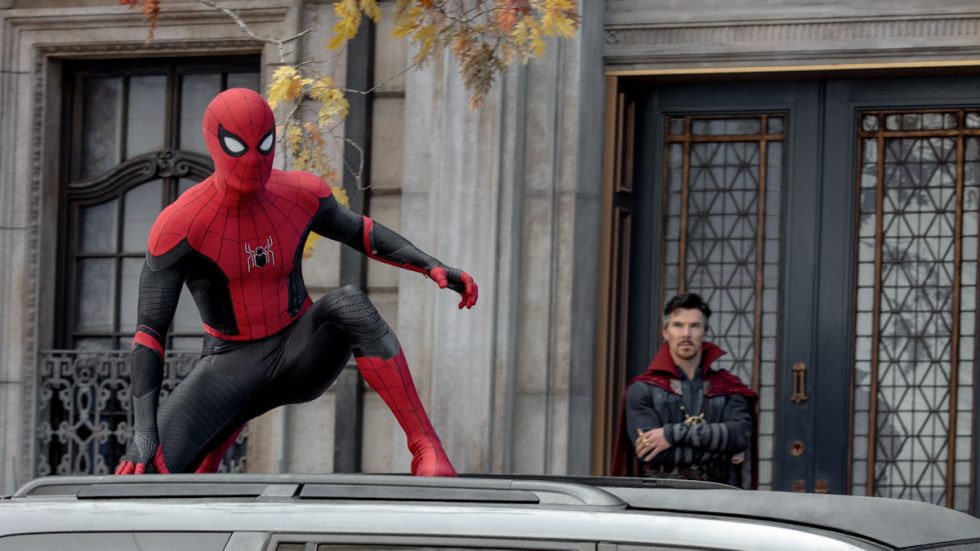 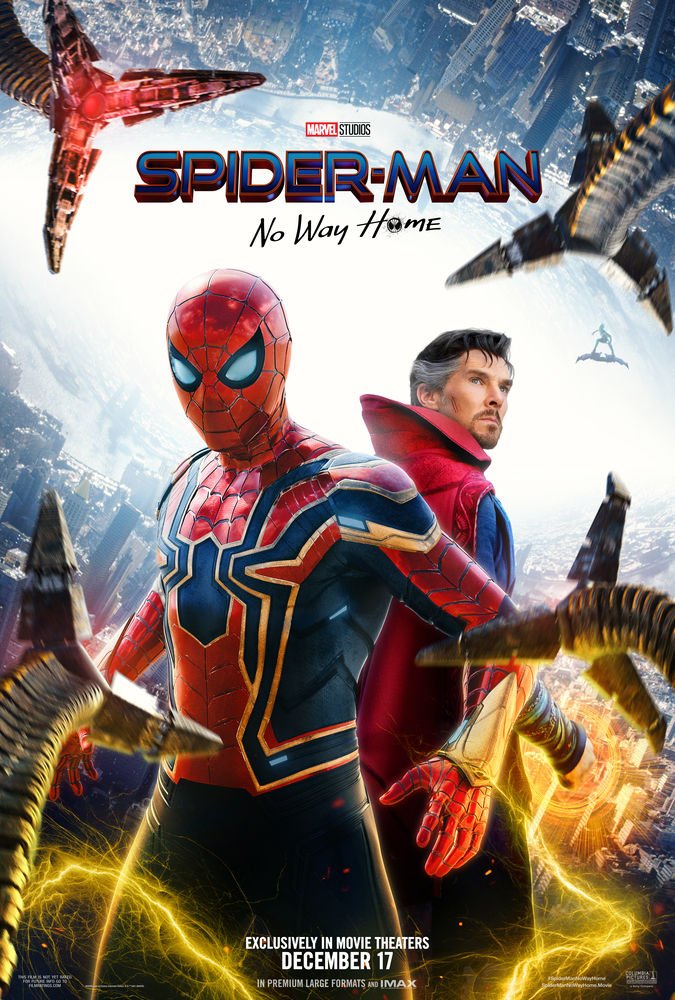 When last we saw Peter Parker (Tom Holland), in Spider-Man: Far From Home (2019), Mysterio (Jake Gyllenhaal) had just revealed Spider-Man’s alter-ego to the world before blowing up a bridge and making Peter Public Enemy #1 at the behest of J. Jonah Jameson (JK Simmons), muckraking publisher of The Daily Bugle. Now in Spider-Man: No Way Home (2021), this final act of destruction affects not only Peter’s social life with protests and the complete lack of anonymity but the future prospects of everyone he cares about. Everything connected to Peter turns to ash. In any other superhero movie, Peter would, with the help of his friends MJ (Zendaya) and Ned (Jacob Batalon), set out to clear his name, except this isn’t your typical superhero movie. This is a Sony/Marvel hybrid and things are about to get wonderfully weird.

Peter enlists the only other superhero he knows on a first-name basis, and that’s Dr. Steven Strange (Benedict Cumberbatch), recently returned from the Blip and frankly a little tired of being pulled into everyone’s BS. He agrees to help Peter with a spell to make things not as awful, except – well, it goes badly, and then things get worse.

Let’s just say this is a movie where good intentions lead to catastrophic consequences. Whether you believe it’s a screed about the futility of saving everyone, the poor judgment of turning the other cheek, or the pitfalls of appealing to one’s better nature, the consequences of always doing the right thing will always end up terrible for someone and it’s unavoidable. Spider-Man: No Way Home questions the verity of sacrifice, and the sincerity of helping everyone always. We are reintroduced to old friends we thought we’d never see again and we learn that much like in Spider-Man: Into the Spider-Verse (2018), the battles fought and the justice achieved may not have been worth the price paid.

Our favorite villains are brought back with understandable confusion considering that the Peter Parker they’re fighting isn’t their Peter Parker. Aunt May’s (Marisa Tomei) well-intentioned meddling only serves to make matters worse as it rattles in Peter’s brain keeping him from doing the only sensible thing.

From here on out, there are only spoilers, so I’ll stop.

Chris McKenna and Erik Sommers once again pen Tom Holland’s Spider-Man adventures, tapping into that Gen Z energy of pent-up rage and making the world a better place at the expense of comfort and happiness. The script is funny and clever, never leaving what would be considered stage-dressing characters like MJ and Ned muted in a film with so much going on. By Act 2, Queens seems as crowded as Happy’s (Jon Favreau) condo with Dr. Strange locked out and creatures not of this ‘verse prowling for new adventures. Jon Watts also returns to helm and demonstrates that sets and soundstages need not be static. Every scene has something happening in the foreground as well as the background, keeping all of your senses engaged. Spider-Man: No Way Home is also funny in a very natural “this poop is bananas,” because it is. There are fanservice Easter eggs that don’t distract with their obviousness and very tender moments that may make you cry.

At times, it feels exuberant and ridiculous, but it’s a superhero movie. A kid bitten by a spider, wearing a suit made by a genius, clings to walls and swings from synthetic webbing – but sure, let’s nitpick about “reality.” Chances are you aren’t seeing Spider-Man: No Way Home because you felt like walking into the third movie of a trilogy you’re largely ignorant of because your evening was free. This is a movie even casual fans of all of the Spider-Man movies can enjoy.

Spider-Man: No Way Home (2021) is rated PG-13 for webslinging through the Queens skyline, lots of superhero/villain punching, stabbing, explosions, falls from heights, and a death.

Please be advised there are two post-credit scenes: The first occurs after the main cast scroll which will give you time to run to the bathroom after a runtime of 148 minutes (and the 32-ounce soda that you knew was a bad idea), and then you can come back to your seat and chatter with friends and new acquaintances about how incredible the movie was and the memories you relived, before the final post-credit scene, which is really more of a preview to Dr. Strange in the Multiverse of Madness (currently scheduled for release in May 2022), so stick around.

Spider-Man: No Way Home is streaming now on the following services:
Powered by JustWatch