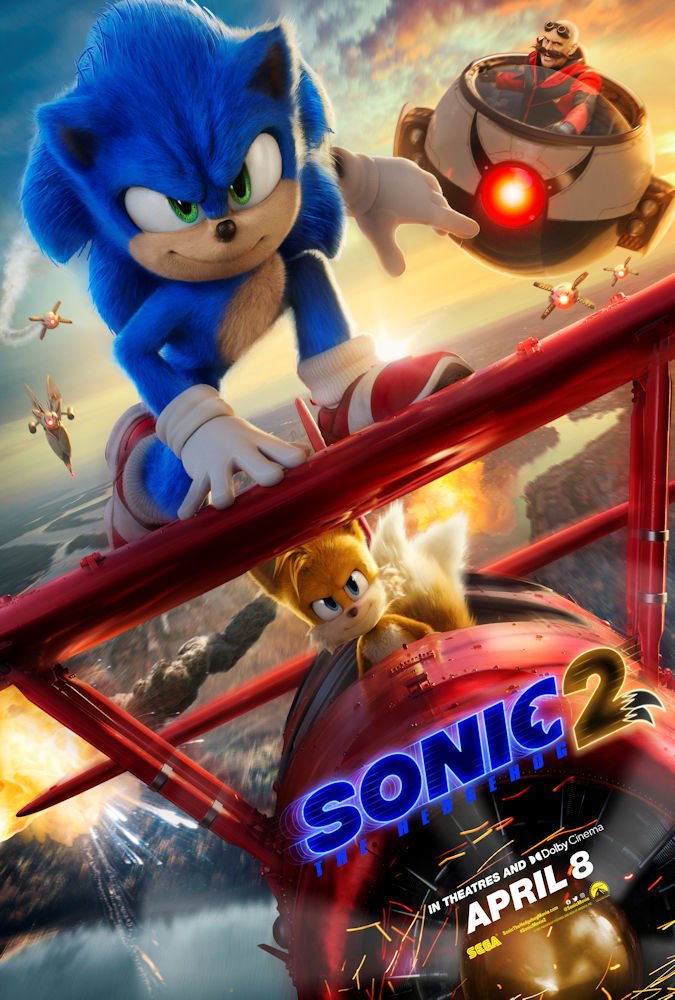 Sonic the Hedgehog 2 (2022) has something for everyone, but sadly, none of it belongs in the same story.

While Tom (James Marsden) and Maddie (Tiki Sumpter) are in Hawaii for a family wedding, Sonic is settling into his life in Green Hills and is left on his own to Be Good. That is impossible as Dr. Robotnik (Jim Carrey) finds his way back to earth with Sonic’s new arch enemy, Knuckles (voiced by Idris Elba), on a hunt for the mystical Master Emerald. If you’ll recall from the original Sonic the Hedgehog, (2020), Longclaw the Owl left Sonic a map of Safe Worlds he could travel to, and on this map (apparently) is the location of the first leg of this treasure hunt. Robotnik wants the Master Emerald for world domination, Knuckles wants it to bring back honor to his extinct people (sure), and Sonic wants it to keep it safe and away from everyone else, so that’s the plot. There’s a side-trip to Siberia for a dance-off, and then to Hawaii to ruin a wedding, and back to Green Hills for the final comically-pointless destructive showdown. With his new friend Miles “Tails” the Fox, a master inventor with two tails that help him fly, Sonic sets out to save the world and teach his new friends the meaning of friendship and family.

Does it sound like a lot, because it is absolutely a lot.

Elba growls his way as Knuckles through scenes, reminiscent of Star Trek aliens who don’t understand human emotions. With a warrior’s mentality of honor, loyalty, and beating the crap out of people, Knuckles would almost be an interesting character if his backstory didn’t involve genocide, colonialism, and cultural theft. I wish I was kidding.

Carrey’s adolescent one-liners in lieu of a script weren’t funny, even in a crowd of kids who find poop jokes hilarious, and his quips add nothing meaningful to the overall story. A silent Robotnik is far more menacing than a Robotnik that enjoys the sound of his own voice. His over-complicated gadgets that substitute for a personality and character development are not enough to chew green-screen scenery. It’s exhausting. Drones, a towering mecha-man, the mustache, and spastic finger movements, the comedic result is not much better than if you gave a toddler a Kalashnikov. They’re going to shoot you in the knees and no amount of non-sensical babbling will make it cute or funny.

I haven’t forgotten the wedding and Tom’s own fish-out-of-water story about blending with the in-laws. I think they were going for “look how different Tom is from Rachel’s (Natasha Rothwell) fiancée, Randall” (Shemar Moore), without specifically bringing up the obvious, but Tom is played by Marsden who was Scott Summers/Cyclops in the X-Men movies, so he’s not exactly a wet noodle. Their abs deserve better.

Marsden and Sumpter feel sketched in the background for a story that doesn’t need them. Having them disappear completely and return for Sonic the Hedgehog 3 (of course there will be a 3) would have made more sense. Instead, everyone is treated to 15-20 minutes of an elaborate, pasted-in subplot featuring the “black-ops” government organization G.U.N. You remember them, the Guardian Units of Nations that was after Sonic in the first one? No? It’s fine. You won’t remember them here, either. When the second and tertiary humans aren’t getting in the way of the story, they spend a lot of time staring up into oncoming doom.

Sonic 2 is too much story for a 2-hour film aimed at kids and there is not enough of the individual pieces to make any part of it compelling. There’s the family angle, government angle, the hunt for MacGuffins, and the exhausting over-the-top No, you’re not getting your own spinoff villains. I know it’s aimed at kids, but grownup fans are peeking in on this too and wondering what exactly happened to a beloved Sega property. It’s sad watching your heroes age badly and die.

Sonic the Hedgehog 2 (2022) is rated PG for literal cartoon violence, eating mushrooms (not the psychedelic kind, sadly), super mild swears, and humor our mothers would have called rude.

Sonic the Hedgehog 2 is streaming now on the following services:
Powered by JustWatch