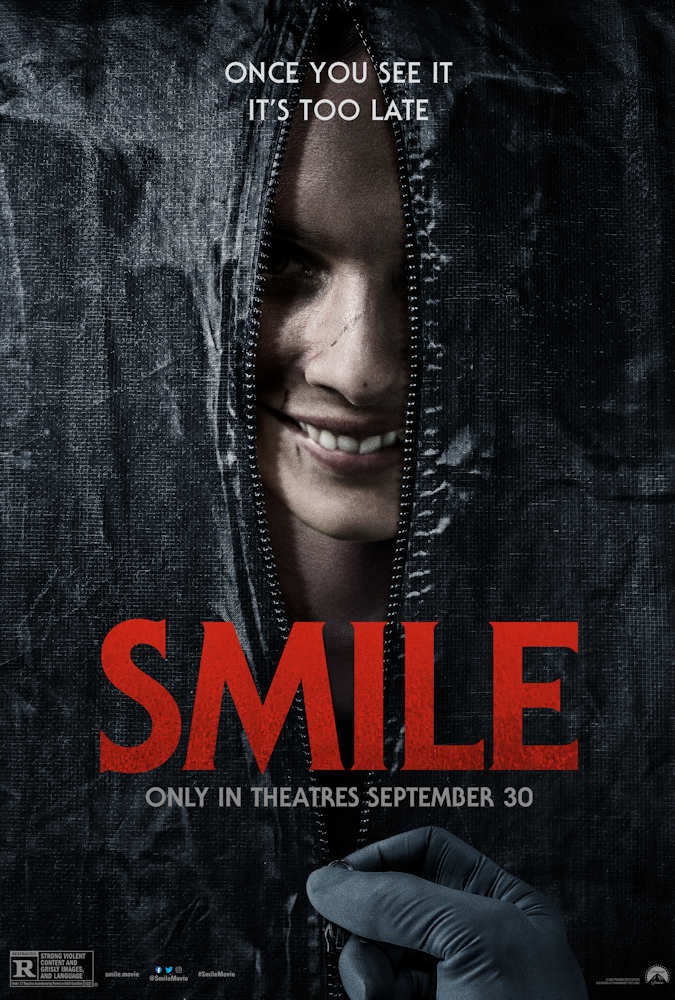 Horror movies that deal with mental illness are one of my favorite subgenres. It’s not exploitation, like say Psycho (1960) or Maniac (1980). It’s when they get it right, like Split (2016) or The Night House (2020) that remind the viewer that it’s not all bad wigs and sharp knives. Smile (2022) is one that gets it right, even when not everything works.

Dr. Rose Cotter (Sosie Bacon) is an ER psychiatrist evaluating the trauma of at-risk patients before either releasing them or holding them for more treatment. When Rose witnesses a suicide during an intake, she’s exposed to what she believes is an ongoing curse and she has only days to crack it before it consumes her. Rose is dealing with her own unresolved childhood trauma, thus shoving Smile into the trope of “The Shrink” who needs as much therapy as she gives out.

Reluctantly along for this funhouse ride are her fiancé, Trevor (Jessie T Usher) who just wants his skittish and non-mental wife back, and her ex-boyfriend Joel Kyle (Gallner), a police officer who helps as much as he can for his own reasons. Her boss, Dr. Desai (Kal Penn), recognizes a problem and for all of his compassionate help, it’s not enough. As Rose unravels into varying states of paranoia and psychosis, she can no longer distinguish between mania and reality, putting everything she loves at risk.

Writer-director Parker Finn, has a firm handle on the unbalanced camera angles and the slow pans, ramping up the anticipated tension, and he manages to execute more than half of the jump scares successfully. There are just too many and if you’re immune to that sort of thing, you’ll still enjoy the methodical crawl to the stinger. Unfortunately, all of the really good jump scares have already been played over and over in the trailers, so try not to let that bother you. Smile is very effective in blurring that line between paranormal activity and PTSD-induced schizophrenia. It’s nearly impossible to tell what is real and what isn’t and that is a lot of the fun.

The score feels as much of a character as Bacon or Usher, with voices mixed in with the music, creating another level of unreality. It’s a constant presence in the movie. 360-degree sound in a theater for a film like Smile is effective in adding unease to a perfectly normal scene of tea and conversation. Smile wants to be a sensory experience and it almost gets there.

At nearly two hours, Smile drags. As Rose continues her descent, a viewer may begin to wonder where her keepers are, yet another dig at how mental health is treated in the modern era. Sure, she could get some pills from her own therapist (Robin Weigert), but they aren’t a quick fix. Her fiancé continues to go to work (admittedly, it’s avoidance), so she’s left on her own to get up to dickens. Even when help is offered, she refuses it. For someone desperate to be listened to, she’s always pushing away assistance. It’s a little maddening if commonplace. She’s an educated woman, superficially capable of making her own decisions, even if she is a danger to herself. It’s the dark side of body autonomy.

Please be advised the opening credits have a strobing effect and may cause discomfort in photo-sensitive viewers.

Smile (2022) is Rated R for self-inflicted Chelsea smiles, falling through glass tabletops, conversations and gruesome pictures about suicides, the unfortunate (off-screen) demise of a cat, and a visual representation of mental illness which reminds me strongly of Shawn Coss.

Smile is streaming now on the following services:
Powered by JustWatch