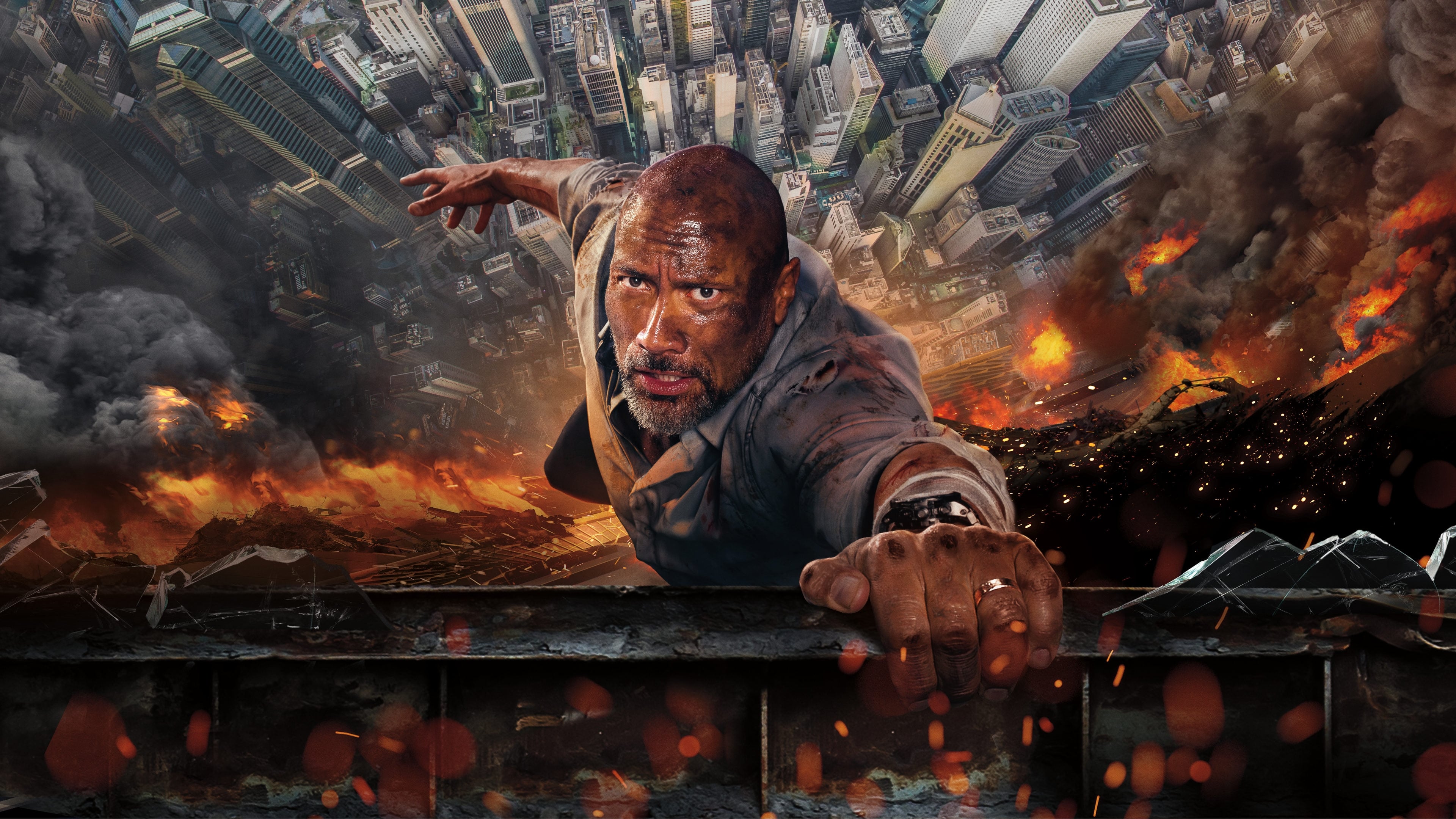 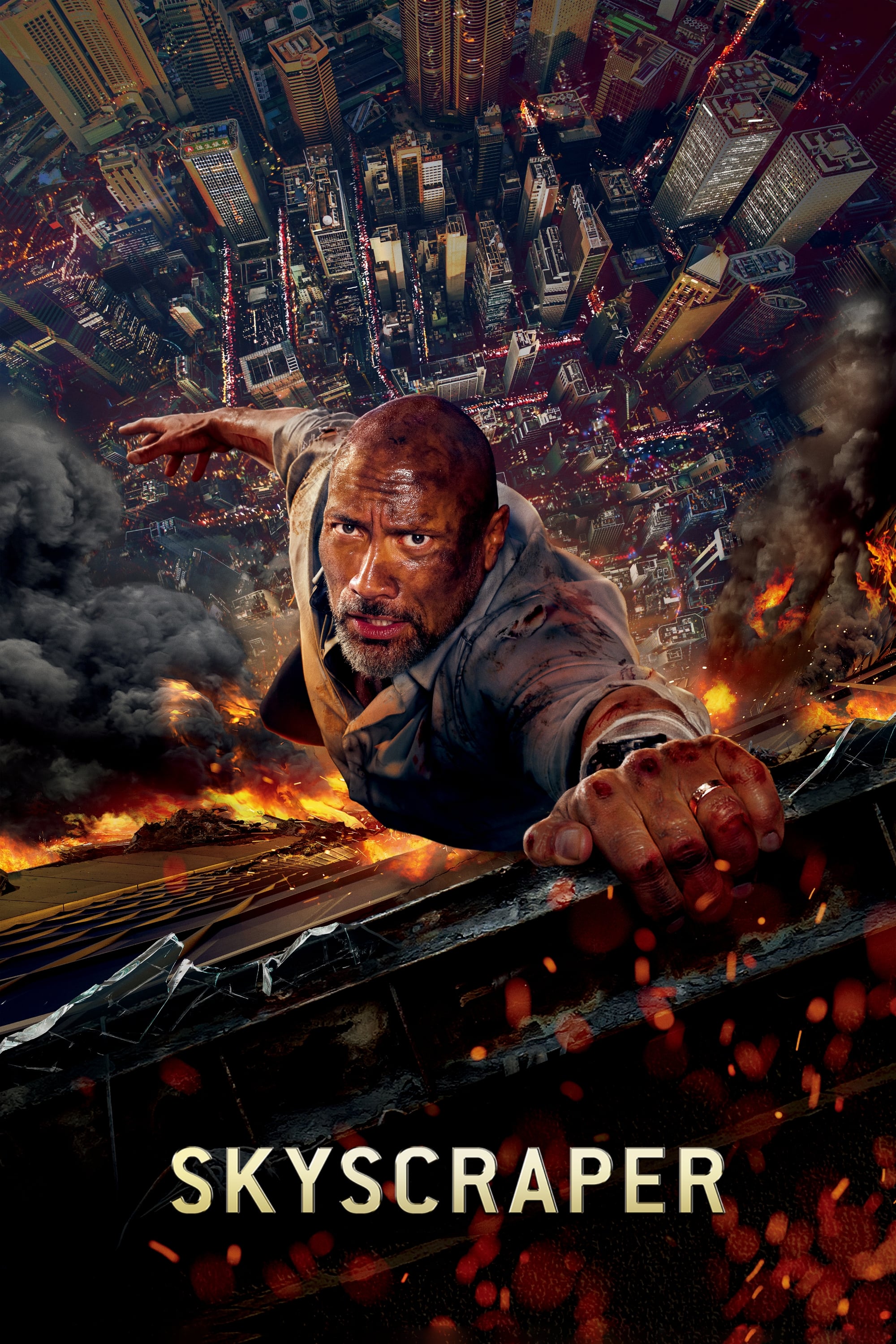 Acrophobes beware – you may want to sit SKYSCRAPER (2018) out.

Will Sawyer (Dwayne Johnson) has put the pieces of his life back together after a hostage situation went sideways many years prior. He’s head of his own private security firm and he’s been tapped to evaluate The Pearl, the world’s tallest skyscraper, and her multi-layered security and fires suppression systems. Will and his family currently occupy the Pearl in one of its residential apartments, part dry run, part hands-on inspection. He has a beautiful, fearless wife (Neve Campbell) and cute as a button twins (McKenna Roberts and Noah Cottrell) and despite his missing a leg, his life seems super sweet. He’s handed the keys to the building in the form of a tablet for its final test when everything goes sideways. Scary men with foreign accents are plotting and scaring the children and beautiful Asian women (Hannah Quinlivan) shoot people in the head with seductive smiles and awesome hair. When the building catches fire and all of the fancy suppression systems fail, Will needs to fight his way back into the building to save his family.

Look, this setup is easy as pie to deconstruct and the bad guys aren’t hard to spot, but you’re not watching a Dwayne Johnson movie for its layered plot points. You’re here for the action and the drama and the apocalypse-level crimes being committed. You’re here to watch Dwayne Johnson jump, punch, kick, and wise-crack his way out of a situation. He plays guys like us (if we were 6’5, built like professional wrestlers, and had charming smiles) put into impossible situations and uses his smart brains to puzzle his way into new more complicated puzzles.

It’s rather fun to watch.

Yes, Johnson is this generation’s Bruce Willis.  Are his action films formulaic? Well, sure, but they aren’t (mostly) stupid. This can be absolutely be seen as a remake of Die Hard (1998), but honestly, who cares? They’re wildly entertaining and thrilling to watch. Rampage (2018), Jumanji (2017), I’ll even concede The Fate of the Furious (2017) – you grab your popcorn, settle back and enjoy the ride. Some of the softer moments may be a little heavy-handed feel a little feel-good-preachy, but inserting a little schmaltz for the feels is perfectly fine. It makes the crazy stuff Johnson puts himself through feel human and real- even though jumping from a crane to a broken window several dozen feet could totally happen.

I mean, it could, right?

I was super excited to see Neve Campbell playing an adult not running from a serial killer in a mask. I know she’s been in House of Cards and other stuff that should peel away her Scream (1996, 1997, 2000, 2011) franchise character of Sydney, BUT it’ll never happen. If Will’s Rescue Team member Ben looks familiar, you’re probably recognizing Pablo Schreiber from Den of Theives (2018) and as Mad Sweeney in American Gods (Starz, 2017). It’s a solid cast all around and it absolutely elevates what could be a tired action film onto something rather exciting.

The special effects for Skyscraper are incredible and relentless and several sequences do terrible things to your constitution. Running, jumping, fire chaos, mirror, and the view of Hong Kong from 200 stories up. If you’re afraid of heights, and I mean the kind of fear where you hyperventilate while standing at the top of your back porch stairs, maybe Hotel Transylvania 3 is more your speed. I can’t imagine watching this in 3D, but I absolutely recommend it for the stomach-dropping thrill ride you didn’t get from Jurassic World: Fallen Kingdom (2018) (there I said it).

Skyscraper (2018) is rated PG-13 for mild swears, explosions, bad guys with guns, a helicopter sequence that made me duck, a raging inferno, stupid ridiculous heights, and women kicking the crap out of each other.

Skyscraper is streaming now on the following services:
Powered by JustWatch