She Will Movie Review

She Will Movie Review Metadata

She Will Movie Poster 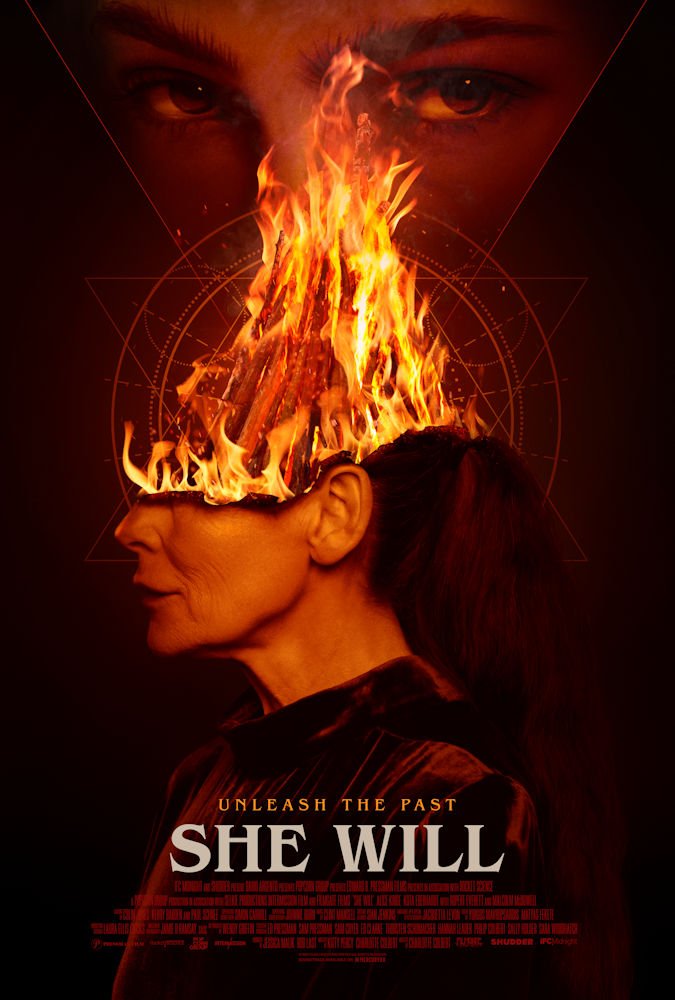 She Will Movie Metadata

She Will External Links

She Will Movie Trailer

She Will Movie Tickets

She Will (2022) is a story of former actress Veronica Ghent (Alice Krige), who is recovering from a double mastectomy which has robbed her of her privacy, her solitude, and her sense of self. At a retreat in rural Scotland, Veronica wants to be left alone, but with her nurse, Desi (Kota Eberhardt) constantly at her side and a poorly timed holiday, Veronica has no choice but to endure. She is hurt and hurting and she wears the pain like a comfortable coat through every interaction with other people. At night, she dreams of cavorting with the dark and deserted woods, and with the women who were burned as witches on the grounds of her isolated retreat hundreds of years ago.

She Will is a revenge story that doesn’t focus so much on the darker aspects of witches, though there are plenty of intercut images of torture, fear, and death. It feels like a reclamation of what was lost. In Veronica’s case, her agency as a child actor left in the hands of film director, Eric Hathbourne (Malcolm McDowell), clearly modeled after Roman Polanski. Whether due to the pain, medication, or opportunity to simply exist, every unbidden feeling Veronica has is forced to the surface in dreamy reflection with nightmarish overtones.

Produced by Dario Argento, director Charlotte Colbert paints a palette of shadowy oranges and broken, determined bodies in silhouette. From Krige and Eberhardt, she coaxes a reluctant buddy story of want and need and unwanted attention. There are constant if subtle, microaggressions of men (in general) invading the space and history and experiences of women, whether the forever-hovering concierge (John McCrea), or the artist in residence (an unrecognizable Rupert Everett) who doesn’t understand personal space, or any of the male guests who leer at Veronica through the frame of her films. Charlotte keeps her hand light, but Veronica’s POV is wobbly. Her anxiety is as tightly wound as the braids in her hair. Even in recovery, nobody is safe.

She Will is not another #Me Too film. In fact, the revenge takes a back seat to self-awareness. The witches are never named and remain bloody faces behind iron cages and burnt skin. She Will wants to be about the past reaching up and correcting the present, but because of the gauzy nature of the “magic,” some elements are lost in a druggy haze of alcohol, prescription drugs, and isolation. While rooted deeply in psychological horror, some of the message feels lighter than perhaps Colbert intended, giving us more of a study in traumatic release than of girl power.

She Will is compelling nonetheless. It’s not a film of self-discovery so much as a letting go, which may lose some of the impact.

She Will (2021) is unrated, but I’d give it a solid PG 13 for mild swears, disembodied prosthetic breasts, surgical cuts, blood and scars, bloody faces, vomiting, immolation, non-consensual situations, and long falls ending in violent sudden stops.

She Will is streaming now on the following services:
Powered by JustWatch