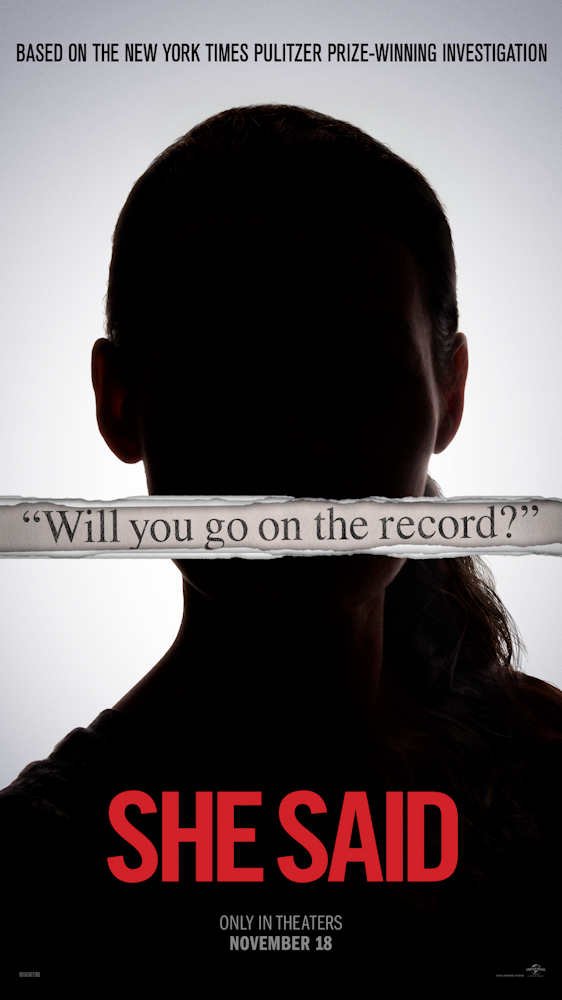 Get Tickets
“This movie is not about the #MeToo movement. And it’s not about what happened after. It’s about how the story was built.” – Zoe Kazan
Based on the book of the same name, She Said tells the story behind the New York Times story that ultimately took down one of the most powerful men in Hollywood: legendary producer, Harvey Weinstein. Rather than follow the aftermath of Weinstein’s fall from grace, producers Brad Pitt, Dede Gardner, and Jeremy Kleiner instead leverage investigative reporters’, Megan Twohey (Carey Mulligan) and Jodi Kantor’s (Zoe Kazan) bestselling book to recount how Weinstein was finally forced to face his accusers. Following the personal and professional lives of Twohey (Carey Mulligan) and Jodi Kantor (Zoe Kazan), Emmy-award-winning director, Maria Schrader takes her time in this methodical 135-minute drama that slowly unpeels the onion of Hollywood’s most despicable man.

While it may be hard to imagine women allowing sexual harassment and abuse in the workplace without punishment today, it was only five years ago when Twohey and Kantor’s Pulitzer-winning article helped open the door for women across all professions to speak up against the deplorable behavior taking place at offices across the country. But breaking the story that eventually welcomed in the #MeToo movement was not an easy or quick task.

Kantor, who had a history of success exposing how women were treated in the workplace, got the ball rolling with focused attention on Weinstein. But faced with numerous women afraid to talk, she turned to the more tenured Twohey, an accomplished and outspoken reporter who previously spent time exposing then Presidential candidate, Donald Trump’s sexual misconduct. Together, with the support of their editors, they traversed the world attempting to get women to open up and share their story on the record. But, as one character states, “he (Weinstein) built the silence and people complied.” Airtight NDA’s (non-disclosure agreements) prevented those who were victims of Weinstein’s abuse from talking on the record and limited the reporters attempts to capture proof of his abuse. Knowing that all it would take is one person to start the snowball, the film chronicles their attempts to get Hollywood actresses like Rose McGowan, Gwyneth Paltrow, and Ashley Judd (who also co-stars in the film), former Weinstein assistants, and eventually those within Weinstein’s inner circle to talk.

Unlike other journalism-based movies like All the President’s Men and the more recent Spotlight, She Said spends a goodly amount of time diving into the personal lives of Twohey and Kantor. A valiant effort to show the two women as more than just reporters, the personal side of each reporter’s life doesn’t ultimately add much to the story and could have shed 15+ minutes off the too-long film. That notwithstanding, both Mulligan and Kazan offer Oscar-worthy performances in one of 2022’s most captivating films. With Mulligan owning the more aggressive role, including a stand-out scene in which she, Kantor, and New York Times editor, Rebecca Corbett (Patricia Clarkson) discuss the investigation at a bar, odds are on her securing a nomination. The film’s supporting cast could also yield nominations for Weinstein accusers Jennifer Ehle (Laura Madden) and Samantha Morton (Zelda Perkins) whose recounting of their experiences with Weinstein literally elicits chills.

Since the release of Kantor and Twohey’s article in 2017, many big names in the entertainment world have been accused (and some even convicted) of sexual harassment including Today show anchor, Matt Lauer, and comedian, Louis CK. Even as She Said plays the festival circuit and hosts screenings across the country in advance of a wide theatrical release, a number of Hollywood’s leading actors, producers, and directors are facing unspeakable charges. Kevin Spacey, despite recently being found not liable for raping fellow actor, Anthony Rapp, is facing multiple accounts of sexual assault in the UK; That 70’s Show actor, Danny Masterson, is on trial for the rape of multiple women; Academy Award-winning director, Paul Haggis, was recently found liable in civil court for raping a film publicist; and Hollywood’s biggest monster, Weinstein, is facing multiple counts in a Los Angeles Courtroom.

In a recent interview, Kantor perhaps said it best, “We hope that one of the permanent takeaways is the power of hearing these stories and the power of facts to effect change.” Just as their initial breaking of the New York Times story changed lives, may the retelling of their experience capturing that story now do the same.

she said is streaming now on the following services:
Powered by JustWatch