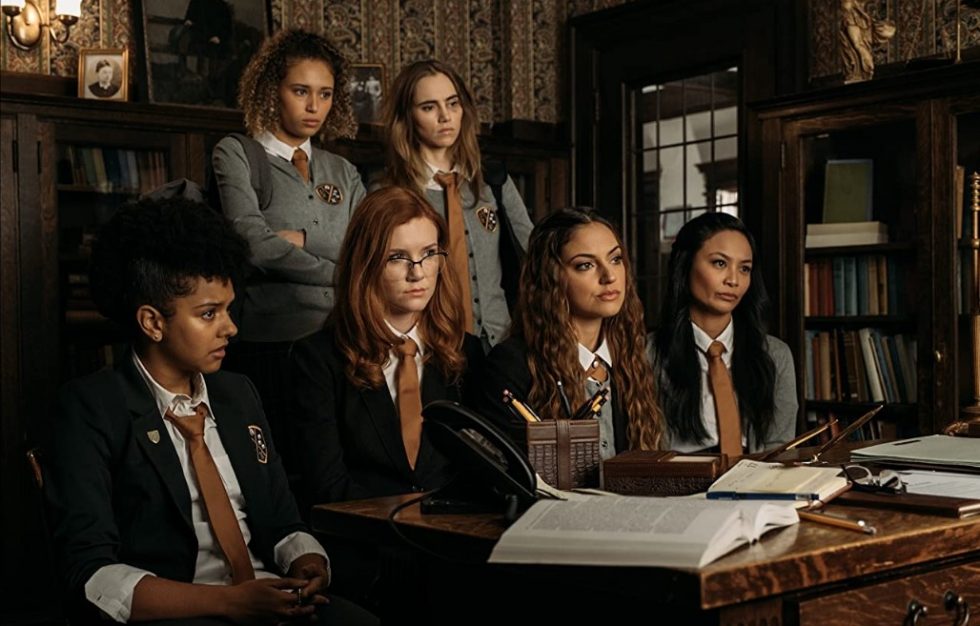 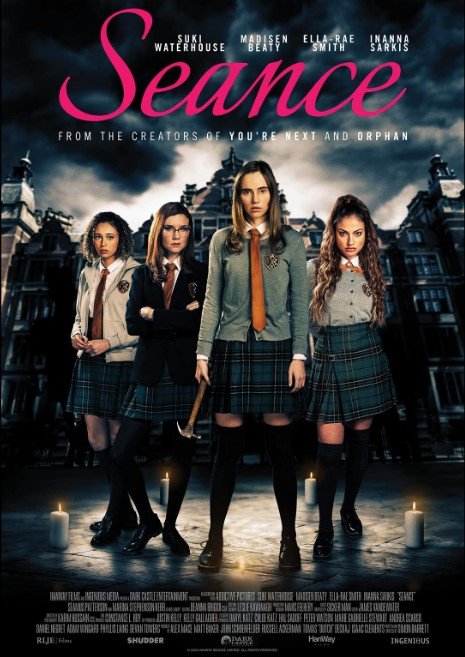 In Séance (2021), at the exclusive Edelvine Academy, a ghost supposedly haunts terrified young girls right out of windows. The spectral presence has nothing on the mean girl cliques also haunting the halls, tormenting the uncool and underclassman. When Camille Meadows (Suki Waterhouse) begins her matriculation mid-semester, she has a lot of catching up to not, the least of which include not getting into fights with the established hierarchy.

Alice (Inanna Sarkis) is the ringleader who finds pulling pranks based on school legends and terrifying her friends fun and exciting. One prank too many leaves one girl dead, but girls will be girls. When Camille Meadows (Suki Waterhouse) begins her matriculation mid-semester, she has a lot of catching up to do, the least of which include not getting into fights with the established hierarchy. Settling in the dead girl’s room, she has to contend with a presence that may be more than a trick of the light and flickering bulbs. A few more pranks and a few fistfights later, because Muggle Hogwarts is tres boring, the survivors band together to stay alive. They don’t know if they’ve summoned the ghost of Edelvine Academy, but something won’t stop until none of them make it to graduation. Meanwhile, Camile is hiding secrets of her own, and her

For a movie that is less about haunted houses and the psychotic imaginings of higher education, I really enjoyed Séance. This isn’t your hokey, predictable “And Then There Were None” scenario at play because while there may be a ghost lurking the hallowed halls, the individual picking off students is clearly flesh and bone. This is a whodunit with fatal repercussions that spirals out from one student too many. While you can probably guess who the culprit is, determining why is a little trickier, and the spiral of deception and red herrings was a nice change of pace.

Séance is more than a teen slasher with a ghost rattling chains. It’s a smart budget horror film that relies on the story propelling the gore instead of the other way around. These aren’t interchangeable characters and they’re certainly more fleshed out than normal. Soft-hearted Helina (Ella-Rae Smith), smarty Bethany (Madisen Beaty), instigator Yvonne (Stephanie Sy), and enforcer Rosalind (Djouliet Amara) have distinct personalities that go beyond prep school bad girls.  They’re worth caring about and getting to know (before some of them die, anyway). It makes what happens over a well-paced 92 minutes very engaging.

Séance is streaming exclusively on Shudder.

Seance is streaming now on the following services:
Powered by JustWatch