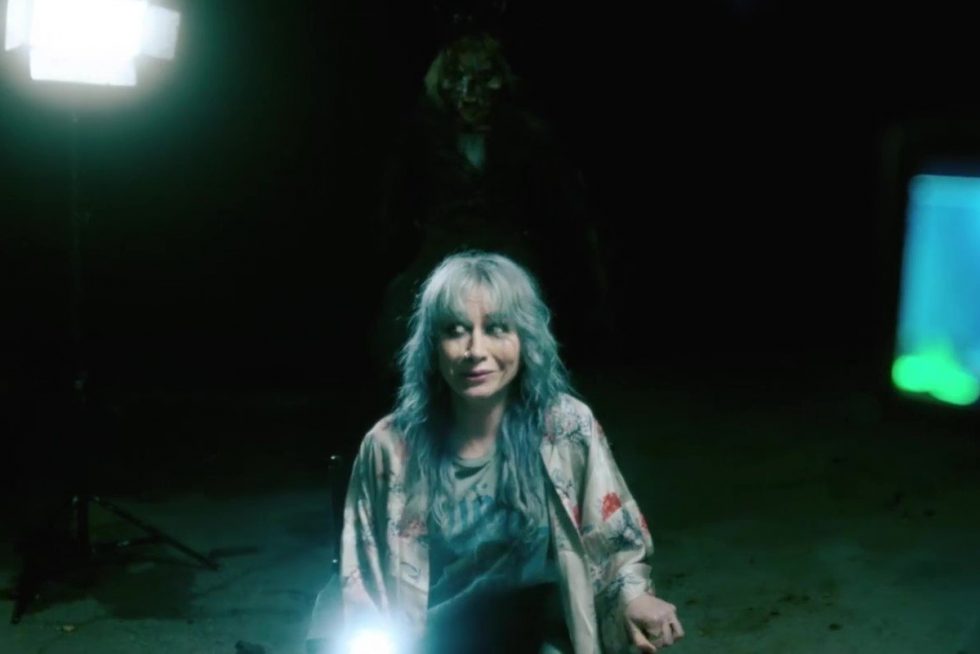 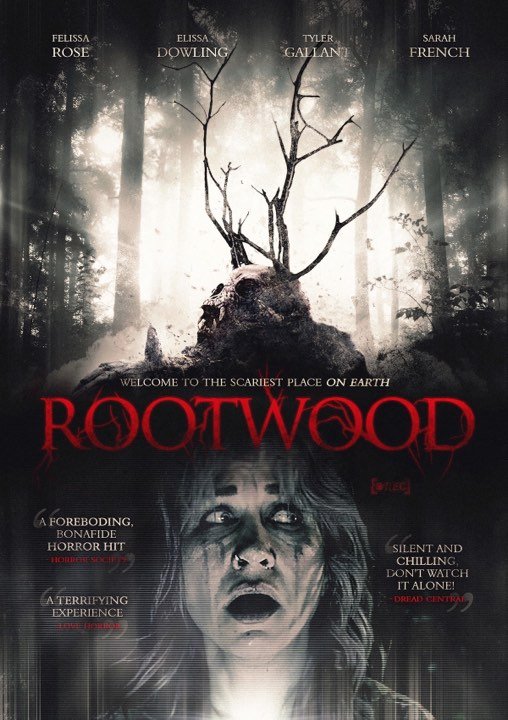 You can’t see the rubber monster for the trees in Rootwood, a Blair Witch clone, if it were made by people who’d sort of heard of The Blair Witch Project (1999), but still found it mildly inspiring.

Will (Tyler Gallant) and Jessica (Elissa Dowling) are small-time paranormal podcasters tapped to produce a documentary sight unseen about a the Wooden Devil formerly a forest ranger “who just goes nuts” after making a pact with the devil. In this never-heard myth, a forest ranger-turned-Man-Tree-Devil-Thing haunts Rootwood Forest making people disappear, but not so many as regular folk actually care. Will and Jess are given some super-thin research, some nice gear, a few days in the forest, and carte blanche to film a documentary about a subject they know nothing about.

Best friend Erin (Sarah French) joins their movie group because they need a camera person and she takes really good pictures of her food (I’m not making this up). They’re all wearing body cams, so there’s a big fat continuity error, and she’s just another potential body for the pile. With zero preparation, they’re off to Rootwood Forest, hardly dressed for the conditions in a true fish out of water scenario of Lyme Disease, West Nile Virus, and poison ivy.

Nothing happens for 30 minutes, until they come across a graffiti-tagged water tower, which they mistake for a memorial, because Hollywood people have never seen urban tagging before. Literal days and nights go by and they only find a few nooses and really wet graffiti and absolutely no one knows how a documentary actually works.

Basically, what we learn for the next 53 minutes is paranormal podcasters aren’t cut out for actual fieldwork, certainly not Hollywood podcasters because, seriously, look at them. They even get freaked out telling stories about the thing they’re investigating. Rootwood is contrived meltdowns, disregard for the genre, and enough ham-acting to feed a homeless camp.

We’re treated to tight dialog like, “I’m here in Rootwood Forest with Erin, Jess, and myself” and a lot of the character development only adds to the audience rooting for their horrible deaths. It’s not a well thought out movie, and the dialogue feels unfortunately improvised – or maybe it’s just poorly written. For example, Will tells the story of the first person to go missing in the words, as well as everything she saw as she went missing because if there’s one thing people do as they disappear never to be seen again, it’s leave detailed travelogues about their adventures.

I can understand being a fan of the genre and wanting to write a movie because who doesn’t, but honestly, Rootwood isn’t feature-length material. Maybe a good short film with actual dialogue, an outlined plot, and characters that aren’t caricatures of goth college kids. As it stands now, it’s 60-minutes too long. In fact, an hour into the movie, we are literally right back where we started. It’s poorly written, poorly edited, nothing happens worth getting excited about, and the sound is uneven. A little ADR goes a long way. None of the dialogue, in the end, could be heard because where was whispering as if they were wearing functioning mics.

I don’t like horror movies where the characters do stupid things to advance the plot. Rational thinking people do rational smart things every day that land them in a world of hurt. Running wild into a dark forest, stomping off in the dead of night, wearing tub dresses and cut-off jeans to go walking around in the woods doesn’t endear me to the plight of our characters.

The best thing about Rootwood is Elissa Dowling and her hair. I find her to be a committed and competent actor, even when the material is less than compelling. Her hair is awesome. I’m sorry she and her hair couldn’t have been in a better movie

Rootwood is unrated and is distributed by Hugh Octane Pictures. If it mattered, it might be rated PG-13 and only because of the swears, mostly spat out by Laura when she wasn’t chewing the scenery. The effects are small, if practical, it’s clearly a guy in a rubber suit, but there isn’t enough blood to justify a papercut.

Rootwood is streaming now on the following services:
Powered by JustWatch