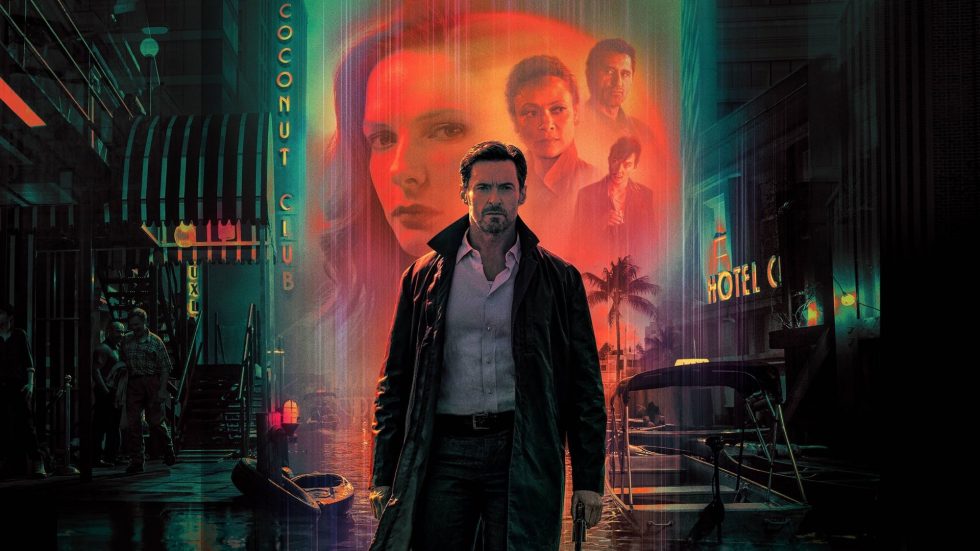 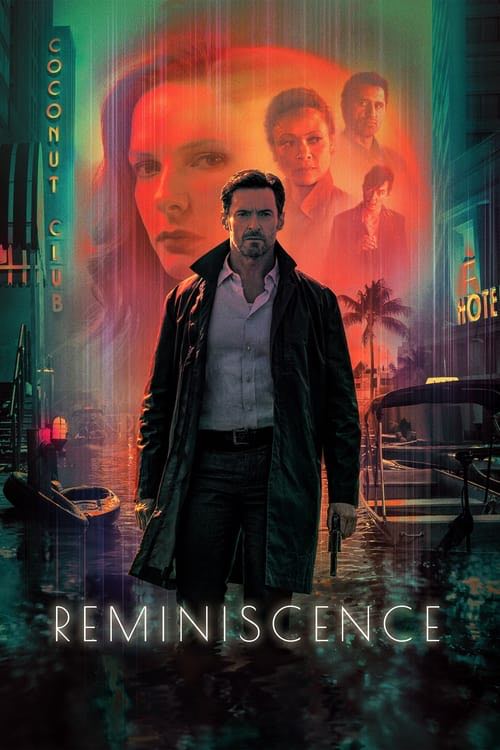 Hugh Jackman stars as a dealer in memory retrieval, lost in the past of a missing lover in Reminiscence (2021).

Nick Bannister (Hugh Jackman) lives in a future where the polar ice caps have melted, and coastal cities like Miami are concrete islands of high rises surrounded by the Atlantic Ocean. The days are unbearably hot, so the action takes place at night – clubs, businesses, police work. With his partner, Watts (Thandie Newton), Nick has a fancy machine that lets customers climb into a water tank to relive their most treasured memories as 3-dimensional holograms. When they work with Law Enforcement, it’s forcing depositions and testimony from unwilling (or unable witnesses) in a tangible recordable form. He stores the chips in an old bank vault with a biometric code to safeguard his clients’ privacy…because it’s the future. One day a literal torch singer Mae (Rebecca Ferguson) walks into his business, looking for her lost keys, and her looks and her accent smite him, and they begin to plan a life together.  When she suddenly disappears without a trace with the memory cards from his supposedly secure vault, Nick is determined to sift through his memories of her to glean any clue as to her whereabouts. While assisting the police in an unrelated deposition, Nick sees his missing Mae in the memories of a dying drug runner. His dogged determination to reclaim the love of his life, no matter what the odds or cost, leads him to discover things about Mae he would have never wanted to know.

Part detective noir, part sci-fi, all sappy romance, Reminiscence is a torch song of mysterious women on the run and literal stolen memories. Scenes are bookended by classic private eye monologue in Jackman’s best detective’s voice. Bannister is a page out of the pulp fiction novels, white shirt, black suit, constant 3-day beard growth, even down to his military vet status. That’s how you know he knows how to fight with guns and his fists. In this proto-future of Miami, land barons hoard dry land, poor mistresses get knocked up, greedy heirs make with the forcible relocations, and hits for hire make for a busy plot. There is simmering civil unrest that threatens to explode an already tense situation, and honestly, it’s just too much to make it topical and relatable.

Reminiscence wants so badly to be a cross between Eternal Sunshine of the Spotless Mind (2004) and Yours Truly, Johnny Dollar (CBS Radio, 1949-1962), it forgets hardboiled detective stories work best when they aren’t 116 minutes long. The scenes between Mae and Nick drag the most, with these relationship dips acting as placeholders for character and chemistry. Filmed like wind-swept perfume ads, grizzled Nick and delicate Mae shown mostly in Nick’s memories feel gauzy and incomplete. They never fought, he can recall, she’s always in an evening gown, and the sex is great. Thandie Newton’s no-nonsense Watts works best, and in the short bursts of screen time, she coveys more emotion and depth than Nick and Mae combined.

Based on a spec-script writer-director Lisa Joy, Reminiscence feels like a glitchy plot generator set to All. Mobsters, drug deals, lounge singers, illegitimate children, unfinished love affairs, tossed in and set to puree.  The repetitiveness of some scenes only added to the slogging unreality of the whole experience. We get it. Nick Likes Mae, then Mae betrayed Nick, and finally, Nick Feels Entitled To Demand Answers From Mae. A half-hour could have been cut from this, and it still would have felt too long.

Reminiscence isn’t a movie I would recommend, even if it weren’t debuting on HBO Max simultaneously with the theatrical release. It’s just too convoluted and saggy to be enjoyable.

Reminiscence is streaming now on the following services:
Powered by JustWatch