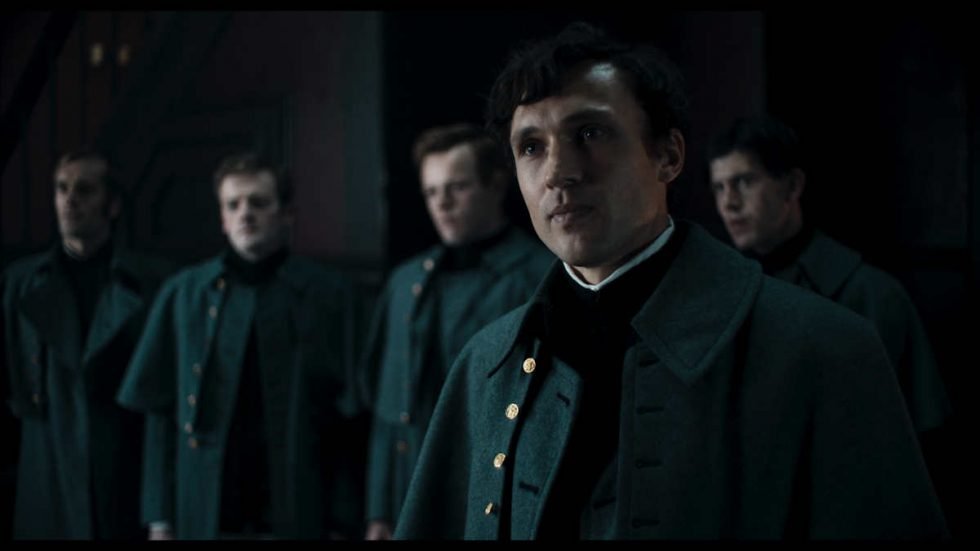 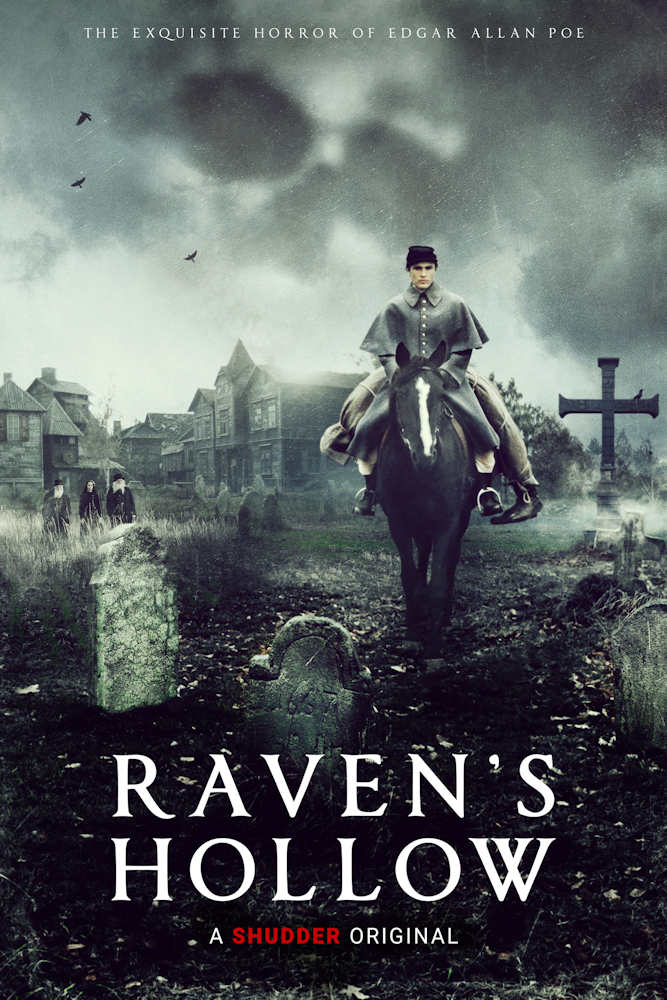 Very little is known about Edgar Allen Poe, father of the detective novel and a man who leveraged grief and ennui into an art form. Raven’s Hollow (2022) is an alternate biography and posits how life would have been interesting as a West Point Cadet who finds dead bodies in secreted towns.

Poe (William Moseley) and other cadets out on exercises stumble across a dying man posed as a scarecrow, attracting more carrion birds than it frightened away. The man’s dying words lead the cadets to Raven’s Hollow, an isolated community with its own ways of doing things, like eviscerating outsiders, and short-form witchcraft. There is a presence that stalks the town after dark that they call The Raven, and Poe is determined to get to the bottom of the mystery, paranormal or otherwise, even at the expense of his own life and career.

We’re supposed to believe that this fictional story set during a very real part of his life is the impetus for his most famous poem, The Raven, published in 1845, some fifteen years after the events of this movie, but that stretches the bounds of disbelief even more than a supernatural Raven. It doesn’t help that this creature is shown more than a little, so the shock of seeing it is lessened every time until its presence was as common as the horses.

The set design, on the other hand, was very atmospheric and you can’t go wrong with a dreary New England Town sequestered behind a wooden wall. Raven’s Hollow was certainly going for gothic mystery with a touch of consumption. The aesthetic is grief and addiction, and each play pivotal roles throughout, with scenes lit by candles or daylight. Very little about Raven’s Hollow is predictable which helps with a storyline that appears very aimless. It benefits from the short running time, but as it inches closer to the end, the dialogue drags with Poe reciting his own poetry (that he hasn’t written yet).

Raven’s Hollow does insert a little of that detective flair as Poe acts as inquisitor, trying to solve the murders and odd occurrences with sharp observances and careful deduction. I would watch a whole five seasons and three holiday specials (two Halloween, one Christmas) of Murder Poe Wrote, but this is only a one-off Shudder Original, so it will have to do.

Raven’s Hollow is not a movie that would tax a tired brain, but it is something different to flip on that isn’t a tense slasher or overly cerebral thriller. Watch it to come down from the frenetic staging of Suspira (2018) or the lurid colors of Crimson Peak (2015). If it’s a widows weeds and fainting couch kind of evening, this is your movie.

Raven's Hollow is streaming now on the following services:
Powered by JustWatch