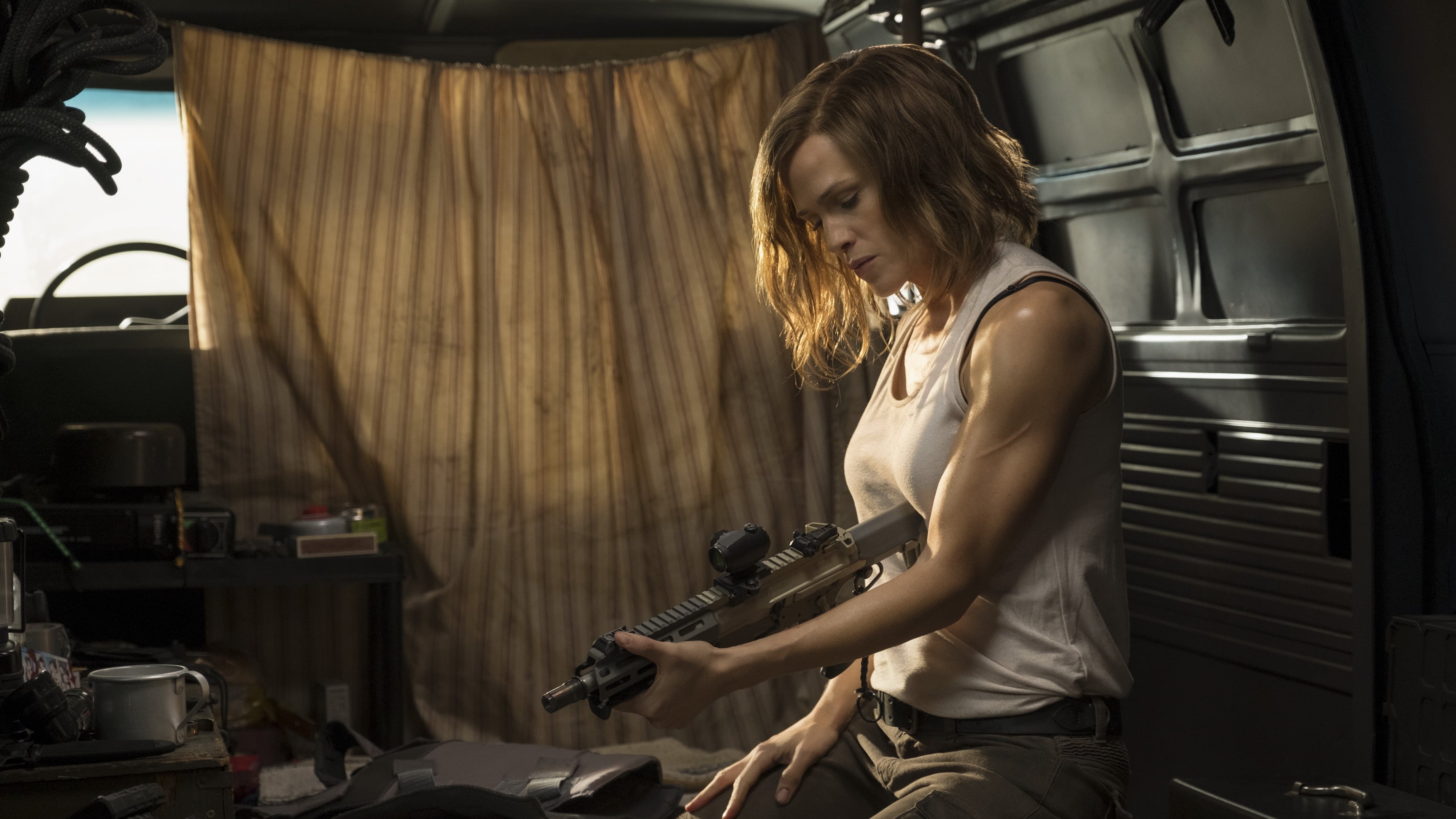 At first glance, Peppermint (2018) looks to be mere Mommy Revenge, but it’s far more exciting than that.

Riley North (Jennifer Garner) is a wife and mother in a lower-middle-class family just trying to make life better for her daughter. She works at a bank, her husband works as a mechanic, and her daughter is picked on by wealthy moms and their brats. That all changes one night when the family is targeted by a  gang and the court system fails her at every conceivable level. She drops off the grid and returns 5 years later to get the justice denied her by taking no prisoners and following the money to the top of the cartel.

Lest we believe these are the actions of a sane and rational woman, I mentioned to a fellow reviewer that Riley North and John Wick would have beautiful psychotic babies. Riley took a shot to the head so things are scrambled up there and she’s got a singular goal in mind that pain and blood loss won’t deter. Unlike movies like Death Wish (2018) Riley doesn’t just pick up a gun a few months later and become a crack shot. Any time you’re played by Bruce Willis, your command of firearms is mastered by shooting at a few stop signs. Five years is a long time to shed the things that made you whole and human and replace them with sharp objects, fighting techniques, and sharpshooting skills.

Actions movies are predominantly male because men are ough and women need saving. Women are tougher than Hollywood would sometimes lead us to believe – their bodies go through a complex process of internal nesting from early pubescence and go on to produce and expel whole human beings. In nature, the females hunt, fight, and if necessary kill. Human women in their lizard brains haven’t forgotten, and Riley North digs deep for that feral maternal instinct to protect and avenge. There are no wisecracks, no monologuing. She doesn’t telegraph her intentions because they aren’t driven by ego. She has a list and she’s not missing a tick to complete it.

There are other people in this movie too, like the victims, her husband (Jeff Hephner), her daughter (Cailey Flaming), the seasoned detective (John Oritz), and the rumpled bumbling never not a rookie (John Gallagher Jr.), the curious FBI (Annie Ilonzeh) and of course the super bad guy (Juan Pablo Raba) Riley is totally bringing down. We’re also blessed with two musician cameos, one playing a homeless man (Tyson Ritter) and the other playing a cop (Method Man)

You’re going to see a lot of negative reviews for Peppermint, and they’re written by folks who complain that it leans on Latino stereotypes (I guess Mexican Cartels should be managed by caucasian types now?), or that women can’t be growly and determined (now where did I put my bustle and fainting couch?). Sorry to tell you so-woke-you-can’t-sleep-types, there are Latino gangs, they are heavily tattooed and they like to kill people. Making a movie about them as bad guys isn’t a social sin. It’s not even supposed to be social commentary. We’re running out of villains to cheer against. Isn’t there a Wes Anderson movie you can go cry over?

We don’t care what those people think about this Peppermint because frankly, it’s not speaking to them. They liked the action and they liked the shooting but they’ll complain of the lack of originality (I dunno, how many different revenge flicks can we have in a lifetime?), or the lack of dialogue.

This movie is fun and it’s refreshing because she doesn’t lean on a male partner to save her. We’ve all seen that partner movie where she does all of the hard work and he steps in to save her and they kiss. This isn’t that movie, thank goodness. Jennifer Garner isn’t here for your campaigning or causes. She’s avenging the death of her family and you can come to watch her do it or stay home and watch some non-threatening drama that gives you all of the good feels.

I don’t want good feels. I want to watch women kick ass and nail hands to desks and blow people up.

That’s exactly what I got.

Peppermint is streaming now on the following services:
Powered by JustWatch