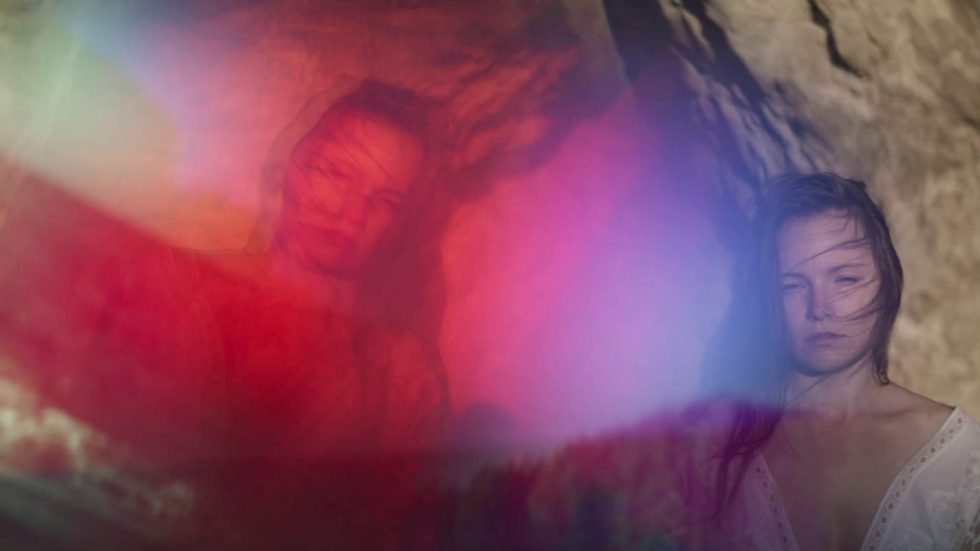 Whatever it is you’re expecting from Parallax (2020), you’re not going to get it, be it a coherent story or a satisfying ending.

Anyone that tells you your lack of enjoyment from a film like Parallax stems from the fact that you just didn’t get it or it’s a “thinking person’s film” probably enjoys an aspect of the film and is willing to let the rest of it make no sense at all.

Naomi (Naomi Prentice) appears to be in the throes of a manic-depressive episode. She’s listless, sleeps a lot, imagines herself as not herself, and has suicidal thoughts. Her fiancé, Lucas (Nelson Ritthaler) is keen on helping her, but between himself and his therapist(Ted Gianopulos), neither seem any closer to finding out what has caused Naomi’s deep spiral or even bother to help. As Naomi explores her nightmares and day terrors through her painting she uncovers a bright otherworld occupied solely by Mikalya (Hattie Smith). They question each other’s realities and exploring shared memories, Meanwhile, her life with Lucas doesn’t seem as real, and Naomi finds her worlds simultaneously blurring and ripping apart.

This seems to be a movie about mental illness – specifically (in my opinion) schizophrenia – and the creation of worlds within worlds. I could be wrong of course, since nothing was ever made concrete. In what reality do we exist for people we know, and if they cease to exist, do we also? When we reach the end of Parallax we seem to uncover a 3rd and 4th realities for Naomi, but no one bothers to explain what it is or where it came from or why it matters. What’s Level 1? What’s Level 5? Did I miss a prequel?

I don’t know, and I had to watch Parallax twice, but I still don’t get it, and it’s frustrating. I‘m not going to pretend this was some deep arthouse Sci-fi/Thriller than only smart people can understand, because it’s not. By the time we reach the end, we can safely assume this is no MFA student’s Jacob’s Ladder (1990), but what it’s trying to do is so loose and incoherent it’s far from watchable. Sci-fi/Thrillers shouldn’t be so nebulous the audience requires 401-level courses in story analysis to decipher. Never make your move so dense, only the “right people” can enjoy it.

I wanted to see where Naomi was going and be a part of her weird, strange journey, and I thought the swirly blue paint on her canvas was a cool way to show disassociation, but her landing realities never added more clarity or depth. Naomi could never point to one definitely and claim it as real which left us as the audience just as confused. If she has no tether, how can we?

So, I didn’t like Parallax because I never knew what was going on, and I watched it twice. Maybe someone in the comments can enlighten me.

Parallax (2020) is unrated, but let’s give it a PG-13 for swears, attempted suicide by drowning, some weird looking orange blood, and a rather intense car scene. This wasn’t a scary film by any stretch and other than a few computers, calling it a Sci-fi/thriller is generous.

Parallax is streaming now on the following services:
Powered by JustWatch