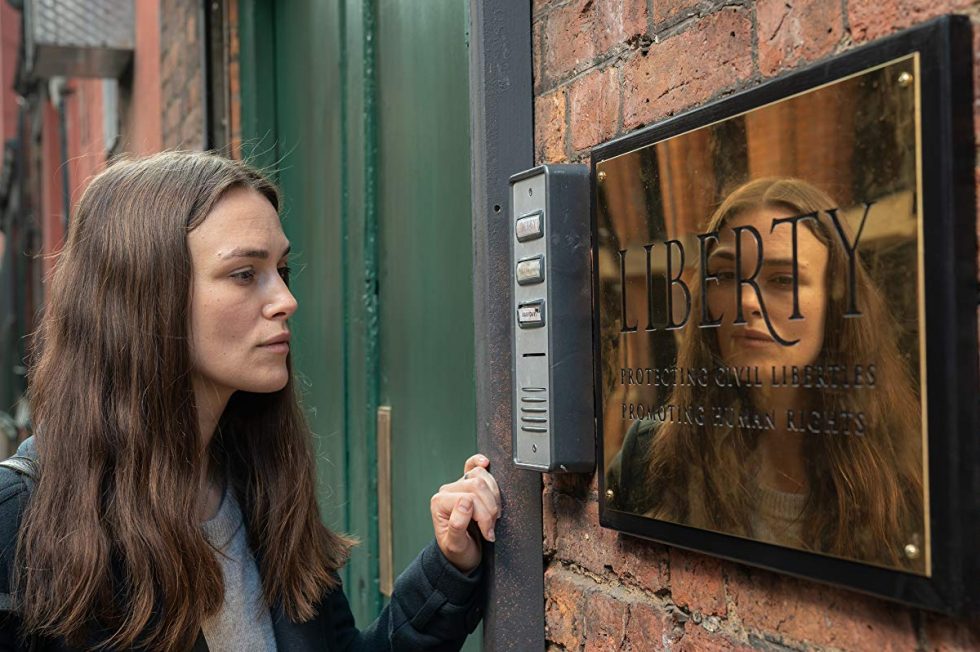 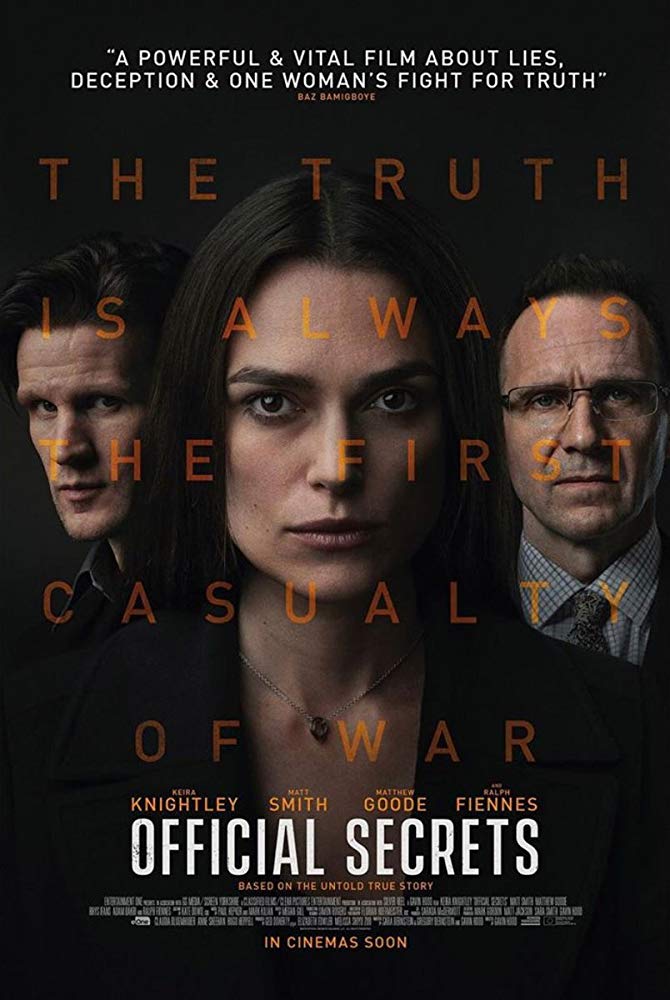 Official Secrets wants to read like a tense political thriller but feels like a “Profiles in Courage” episode you’re watching so you don’t have to read the book.

Katharine Gun (Keira Knightley), working for a British intelligence agency (read: Spies for the Good Guys) receives an all-hands email from a director at the American NSA (read: Other Spies for the Good Guys). The email requests assistance (read: spy on) in coercing (read: blackmailing) members of the UN Security Council in order to sway a vote so the US can get permission to bomb Iraq. As she was already leaning anti-war and now full of proper English outrage, she makes a copy and sends it to anti-war friends, who give it to anti-war activists, who leak it to the press. It becomes a Very Big Thing. She’s charged with breaking the Official Secrets Acts, which is a law that says if you work for the British Government, you won’t be a traitor and leak documents that could damage the security of the Empire. It has what could be described as a detrimental effect on her life and the life of her immigrant husband, however, this movie doesn’t go into a lot of that.

By which I mean at all.

For the most part, we’re led to believe she is terribly inconvenienced by the whole thing. Championing her cause is Martin Bright (Matt Smith), the reporter who initially ran the story in the Observer and her attorney for Liberty (a British ACLU), Ben Emmerson (Ralph Fiennes). Each has something professional or personal to lose, but not really. Martin is the star reporter who likes giving interviews and Ben just wants to do the right thing for humanity when he’s not at his weekend beach house sparring with his neighbor, a lawyer for the Crown prosecutor (Angus Wright).

The whole affair is very English and very polite, which means it was crushing and devastating for everyone immediately involved. Unfortunately, because Official Secrets is so English and polite, there’s really no political drama. This is a flashy, pre-packaged biopic meant to stir the anti-establishment hippies and revolutionary-minded among us who are always looking for an ax to grind. Government is a bully, the little people get squashed, and sometimes legal conflicts are dragged out for a ridiculous amount of time to prove a point no one can remember.

For the rest of us, it’s as dry as wheat toast.

Of course, as an American watching this film you may be moved to wonder things like, why is she not in jail? How does she still have her phone? What do she and her husband do for money for the year she’s not working? Watching this movie, we will never know because that’s an important human angle we’re never allowed to see. This is a year in someone’s life, a year under constant government scrutiny, a year anxious of being arrested, a year wondering if prison would be a few months or several years. We don’t see that strain. We see Knightley’s Gun looking sad or angry, but we don’t see the strain and hardship – not eating her soup doesn’t count. Looking tired doesn’t count. We see placards that denote passed time, like Three Months Later, but the scene opens onto a happy couple, Gun and her husband, Yasar (Adam Bakri) proving that true love conquers all, even potential felony jail sentences, and it’s a horrible disconnect.

And maybe it’s because I’m an American and we have things like the First Amendment and Due Process and the Whistleblower Act, but Knightley being arrested and spending a night in jail, and being handed a coat by her husband because English jails aren’t civilized enough for proper pillows and blankets, and portrayed like a regular afternoon just felt empty.

I can’t make this sound exciting or engaging, and I won’t lie to you. Unless you love political theater and history and the minutia of historical talking points about the beginnings of the Iraq Conflict, there isn’t enough there there for the average Joe who thinks he’s getting a low-key Red Sparrow (2018). This is no Spotlight (2015) or The Post (2017). There isn’t enough of either Gun’s story or the Leak to make it exciting enough to watch for 112 minutes.

Official Secrets is based on the book The Spy Who Tried To Stop A War, by Marcia Mitchell and Thomas Mitchell (Polipoint Press, 2008). It’s touted as this breach of trust and security turning Katharine Gun’s world upside down, so maybe that part is lost in the translation from page to screen by writer-director, Gavin Hood. It’s hard to get the audience to feel strongly about a character being every so gently oppressed by her government, while very little of her life changes for the worst. We’re already spectators to history, so filmmakers, don’t forget to make us care.

Official Secrets (2019) is Rated R (though I’m not really sure why, but okay) for mild swears, sanitized images of the Iraq Conflict, so mild vanilla is spicy sexytimes, and barristers in wigs.

Official Secrets is streaming now on the following services:
Powered by JustWatch