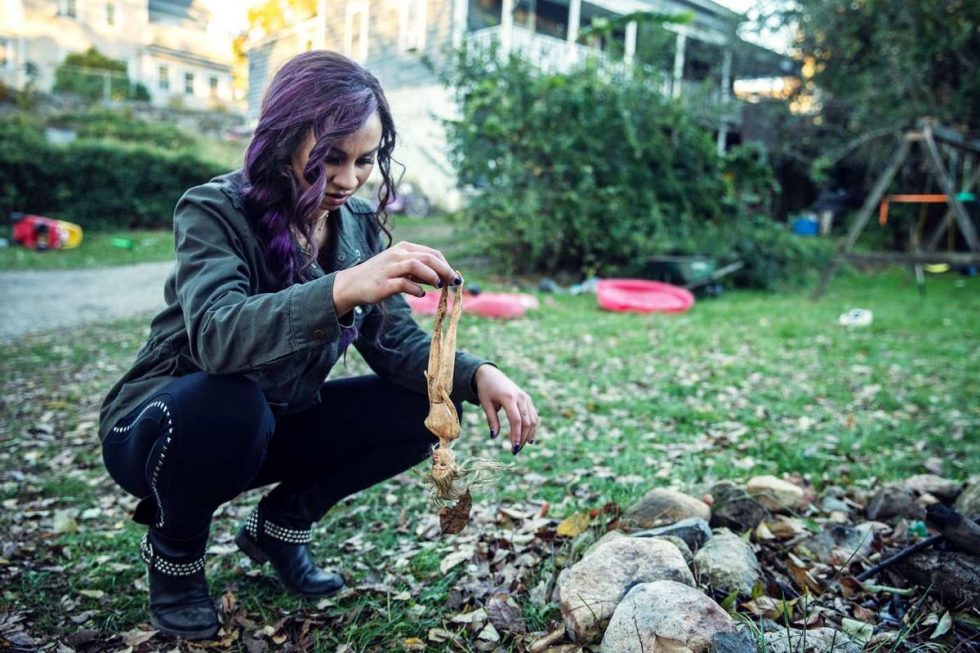 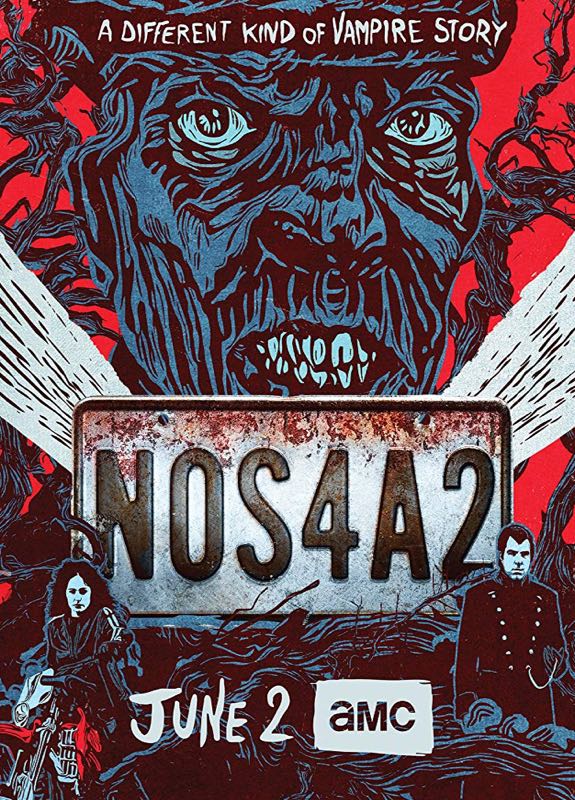 Here there be SPOILERS for NOS4A2.
Episode 4 of NOS4A2 on AMC. Last week, we met a committed (by which I mean in a mental hospital) potential creative in Jolene, Vic saw a light at the end of the tunnel that wasn’t a migraine or a brain hemorrhage, and Heley is abducted by Manx.

Because of the funky editing, editing, I’ve broken up the recap into the main places the action happens.

Sugarcreek PA (1978): It’s Christmas Day at the Partridge Family Homestead. Young Bing (Matthew Evegan) has been presented with a gas mask from his father. The gift isn’t fully appreciated and Father Partridge (Larry Mitchell)is a bit of a bully, shoving his kid around and calling him a “retard”. Bing plays along to get along and his mother (Miriam Silverman) heaps love and praise upon him, saying, “I love you more than anything, Bing Partridge.” Call it 10-years later, Teen Bing (Ivan Hoey Jr.) is on a ladder with a staple gun, hanging Christmas lights when his father pushes him one step too far and Bing kills him. His mother finds him in the garage, weeping over the body and consoles him, clearly distressed over his future. Bing seeks solace in his mother in a most inappropriate manner, and when he’s finished, kills her.

Haverhill, MA: The police are looking for Haley (Darby Campy) and her missing mother, believing Sharon (Elizabeth Stanley) took them. Vic (Ashleigh Cummings) holds Haley in her mind and rides through the Shorter Way. Spray-painted in neon at the entrance is HOUSE OF SLEEP. On the other side is Bing Partridge’s (Ólafur Darri Ólafsson) home, the front yard full of pinwheels. She runs into him exiting his home with a large garbage bag. She feigns being lost and makes her exit. Inside Bing’s home, squirreled away in the basement is Sharon, bound and gagged. After admonishing her for her language, he doses her again with Gingerbread Smoke. He offers her cookies and makes her say the magic words, “I love you more than anything Bing Partridge.”

Vic runs into Maggie (Jahkara Smith) and insists the Bridge made a mistake dropping her at Bing’s house, not believing Bing could be a kidnapper or murderer. Maggie tries to tell her Inscapes don’t make mistakes and that the misinterpretation of the tiles (SMITTEN instead of MITTENS) was her error, not the tiles. Maggie tries to get Sheriff Bly (Chris McKinney) in Iowa to issue an Amber Alert but he can’t do that across state lines. He’ll try something on a federal level but doesn’t make any promises.

Back home, Linda (Virginia Kull) has a pointed conversation with Craig (Ebon Moss-Bachrach) on the phone, blaming him for the bike and Vic’s illness, not wanting Vic to make the same wild, impulsive mistake she did by getting knocked up. Vic can’t help but overhear them fight about her situation. Vic confronts Linda about the abuse, and she’s ambivalent about it. Her father is both good and bad and loving and violent. Vic takes off, and swings by Bing’s place one more time. Barging in and seeing all sorts of uncomfortable things like hardcore pornography magazines (like literally everywhere). Bing can’t get her out of his house fast enough. She makes him retrieve her borrowed comics and quickly snoops looking for Haley. She gets to the basement, finding Christmas lights everywhere, but no Sharon or Haley. Bing catches her, trapping her in the basement.
Those who sneak and those who spy get punished when they try to lie.

Bing says he didn’t lay a hand on Haley (mostly true) and he raises his voice, but before he can do any physical damage, the phone rings and it’s Manx wanting to talk to Vic. He formally introduces himself and they agree to meet (???) with a time and place to be named later. Bing all but admits to harming Sharon, but won’t reveal where she is. Vic runs out and uses her bridge to find Sharon’s body buried in a field.

Vic calls the police and Sharon’s body is retrieved. Linda picks up Vic from the crime scene. Vic and Maggie exchange looks and Vic leaves with her mother. Linda drops Vic off with her father. They talk about hitting an upcoming bike show and reconnecting, but it’s clear isn’t sure about her feelings for her dad anymore.

Bing sees the news coverage and becomes understandably worried. Things are starting to fall apart for him and Mr. Manx will be very cross with him.

The Road To Christmasland: in the back of the Wraith, Haley wakes up and an older, but not ancient Charlie Manx (Zachary Quinto) sits behind the wheel. They drive snow-covered roads and the trees are heavy with it. Haley is stubborn and indignant while Manx tries to get information out of her about the shorter Way Bridge. Haley starts to lose teeth and her will to fight, as Manx makes it snow spun sugar in the car. Manx convinces Haley that her parents were neglectful and when she gets to Christmasland she’ll always be loved and happy. Haley spills the beans about Vic and her bridge.

At a convenience store (but not on the road to Christmasland?), Manx stops to buy a lot of Christmas tree air fresheners. When the clerk gives him a look, he says simply, “I like Pine.” Outside in the parking lot, a woman’s phone buzzes with an Amber Alert about Haley and a Rolls Royce Wraith. The woman tries to coax Haley out, but Haley pulls her inside the Wraith instead. Manx looks on like an indulgent father as Haley consumes her first meal. This is exactly why we don’t approach children in the cars of heir abductors. Let that lady’s death be a lesson for you. Manx drops Haley off at Christmasland and she’s greeted by Danny Moore (Asher Miles Fallica), who offers a wrapped Christmas present. Inside, there is a large shiny pair of scissors, to play Scissors for the Drifter.

Review:
We see just how inconsistent the Wraith is with Manx’s revival and method of travel, we get some insight into Bing’s past and how his calm friendly façade is a cover for his murderous incest-loving soul, and Maggie just looks out of place no matter where she goes. I wish there was a stronger role for her, other than a hand-wringing Cassandra, but everywhere she turns up, she’s lost or in the way. Her Scrabble tiles, while a neat effect, only work when specific questions are asked, and even then, provide only a vague answer. For someone who lives in a library, you’d think she’d ask better, more pointed questions. Her only large scale “win” is an old woman who went missing, and everyone seems tired of her spinning that old yarn.
We are where we should have been a few episodes ago, but the story is so bogged down with background, making it to episode 4 has been a chore. Plus, how solid are we with what we’ve been given? There isn’t enough horror for those who came for scares. The teen romance angle is broken and angsty, the family drama is ramped up but dysfunctional families aren’t enough to drive this narrative. Apart none of these are can be standalone tales, and together they don’t seem to fit. The main antagonist remains as mysterious as ever, and the main protagonist doesn’t seem fit for the task laid out before her. It shouldn’t be this hard to root for a hero.

The disdain Manx has for anyone he sees as beneath him, whether it’s a lack of courtesy or customer service. He really despises talking with what he perceives as “the help,” and it’s repeated a few times over the episodes. Since we don’t have a handle on where or when Charlie is from, I think we’re supposed to guess he comes from money and a time when other people did the manual labor.

I dunno. Every time we’re given a child to care about, there’s nothing to be done about. We’re 0 for 2 on abducted children, and Vic is no closer to finding them