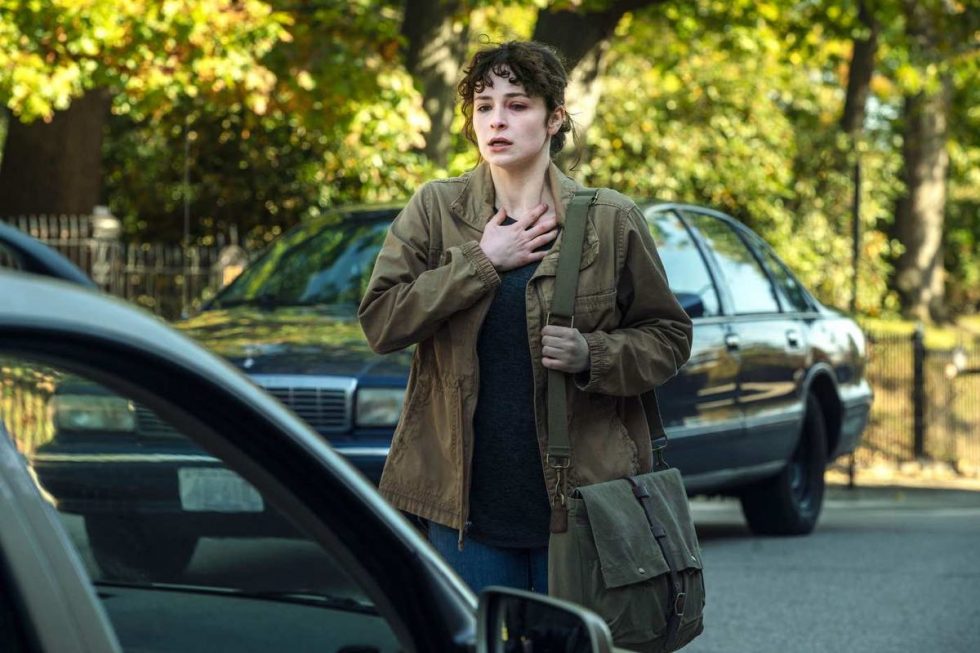 Here there be SPOILERS for NOS4A2 .

Episode 3 of NOS4A2 on AMC. Last week, Vic is at loose ends, both with her life and her new abilities, Bing has his invitation to Christmasland at a steep price, and Maggie hasn’t found the savior in Vic she was looking for and is no closer to finding (the irreparably lost) Danny.

Again, since the editing of these episodes is so ham-hamhanded, I’ve divided up the recap into the characters and their settings.

Haverhill – Vic: Vic (Ashleigh Cummings) is checking out the fees for classes at RISD, which are steep and impossible for a barely working-class family. Emerging from her room to lunch where Tiffany and Chris are already drunk, Vic asks for tax returns for financial aid but Chris (Ebon Moss-Bachrach) can’t provide them because he works under the table. Linda (Virginia Kull) is the same way, with the added dig that “people like them” don’t go to college. Vic rides to the Brewster House seeing a bloodied wreath on the door. Of course, it’s not there and she’s getting stabbing pains in her eye (FORESHADOWING). She needs Angela’s help getting into RISD without getting her parents into trouble for not filing taxes. Willa (Paulina Singer) is all too happy to help and says she’ll arrange a visit to the school.

Willa works fast because the next day it’s a road trip to Rhode Island. Craig (Dalton Harrod) gets to watch his crush ride off with rich kids to a potential new life.

Haverhill – Bing: Bing (Ólafur Darri Ólafsson) and a still elderly Manx search for the creative that traverses the non-existent Shorter Way Bridge. They come across Haley Smith (Darby Camp) who’s searching for her cat. Mittens. Charlie knows everything about Haley and offers her a candy cane. Haley is way too smart for that and when she tries to leave, Bing grabs her by the arm. If there’s one thing Manx can’t abide, its people putting their hands on children and he tells Bing he’s only got one shot at redeeming himself. Next, we find Bing loading jugs of liquid into his car in front of the high school. He runs into Vic who needs her portfolio, so he lets her in. He mentions to her that he got into trouble at his new job and she gives him a pep talk about being his best self.

Here, IA – Maggie: Sheriff Bly (Chris McKinney) once again tells Maggie (Jahkara Smith) she needs to drop the Wraith case. While helping an amourous patron find a book of poetry, she receives an inopportune signal that she needs to consult her Scrabble tiles, which tell her WRAITH HUNTS BRAT. Maggie flies all the way to Haverhill to warn the Vic that she’s being hunted but Vic’s not hearing any of it. Vic is determined to shake the dust from Haverhill off her boots for a new life.

Essex County Psyche Ward, Haverhill, MA: Later after being rebuffed by Vic, Maggie has talked her way into the psych ward with the New England Reads Library Program – Librarians can do anything, amirite? First, she hands a patient diagnosed severely depressed a Toni Morison’s Beloved, which is a ghost story with infanticide at the center. Next, she stumbles across Jolene’s room and finds her in bed and incoherent. Despite asking her a million questions without giving her a chance to answer, Maggie manages to figure out that Jolene was a Creative who used her roller skates as a knife.

(Side trip – Providence Rhode Island): Drew (Rarmian Newton) and Vic bond over an illustration of an Indian building depicting penises. At the registrar’s office, she’s told she can if she can’t apply for traditional financial aid, she can have herself declared as an independent, I guess what we’d call an emancipated minor) in the cases of abuse. Apparently loose lips Angela Brewster has been spilling the beans about Chris and Linda’s rough relationship, but at the mention of abuse, Vic has flashbacks of Manx and images of Danny and bloody scissors and flees from the registrar’s office nearly being hit by a car. Her eye is bloodied again and despite looking like warmed-over death, Drew tells her it would sick if she didn’t join him at RISD.

Haverhill – Bing: In his basement, amongst the skin mags, Bing pulls out his gas mask. He gets ready for his new job by putting masking tape over his uniform patches. He wanders into Haley’s house and pumps Gingerbread Smoke into the bathroom where her mom (Elizabeth Stanley) is taking a shower. We get to assume it’s post-coitus since there’s a condom in the kitchen garbage can (???). Once she’s unconscious, he doses Haley and kidnaps her from her bed and places her into the back of the Wraith. Manx then kills Mittens, because that’s what bad guys do.
While in Rhode Island, Maggie reaches Vic and asks her if she knows who SMITTEN is since her tiles said WRAITH HUNTS SMITTEN. Vic assumes at first Maggie means her new crush, Drew and tells Maggie AGAIN that she’s going to college and Maggie needs to go home as well.

Vic returns to Haverhill and completes the application to RISID by forging her father’s tax returns instead of admitting she or her mom are abused. She receives a call from Haley’s dad that Haley is missing. That’s when she realizes that SMITTEN is Mittens, now dead and Haley is with Manx.

Review:
Look, we’re three episodes in and other than a mildly creepy factor, we’re taking a long way around. This is more of a family drama about the working poor trying to get ahead in life and the inconvenience of Strong Creatives, than a horror series about a psychic vampire and the people trying to stop him.

I want to see this through to the end, but I’d like a little more horror in my horror series.