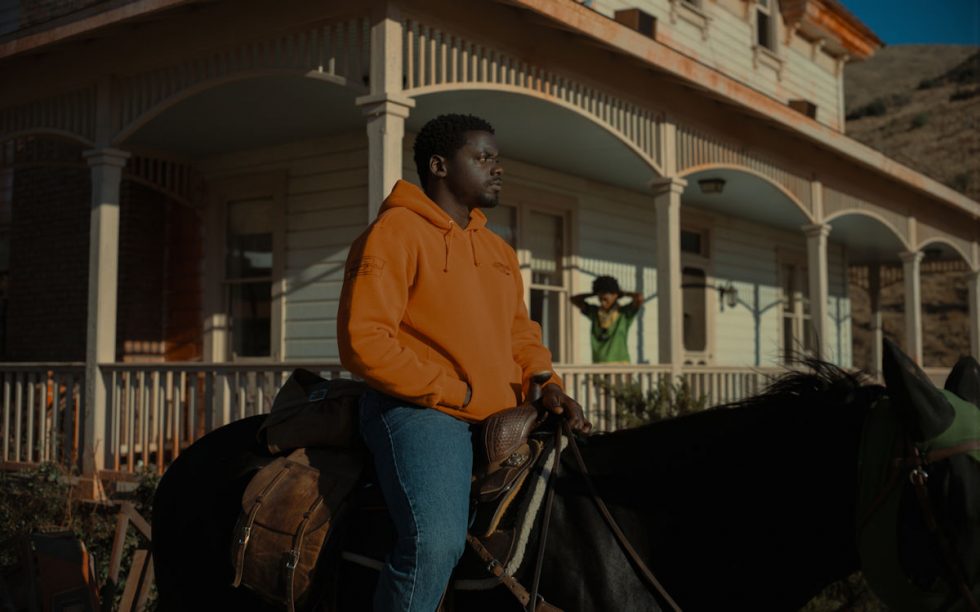 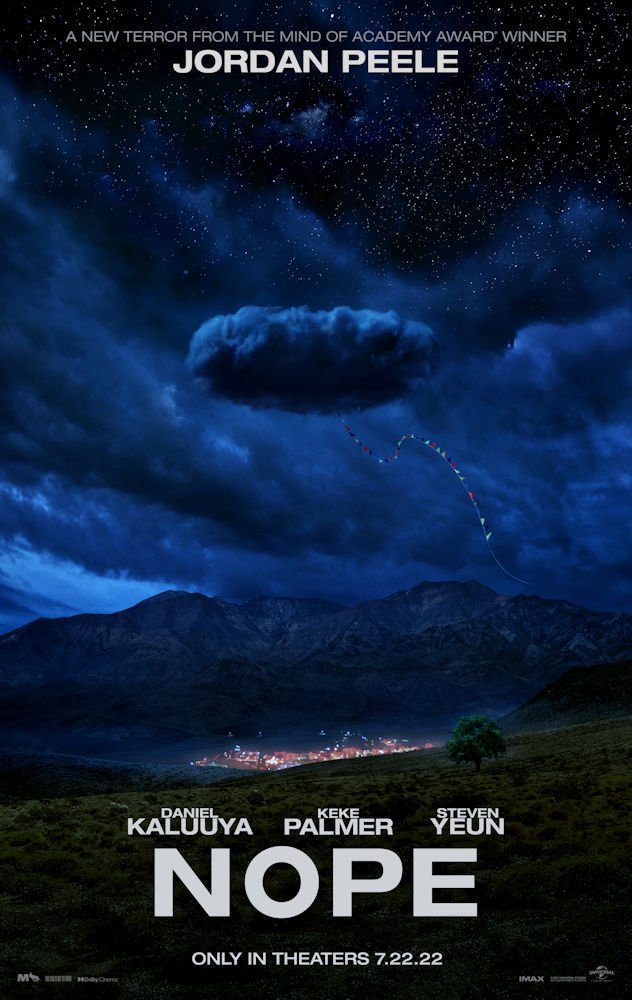 We’ve been teased with Nope (2022) trailers for six months now, and some of us thought we had an idea about what Jordan Peele was going to serve us. We were mostly right.

OJ Haywood (Daniel Kaluuya) is left to run a horse ranch after his father is mysteriously killed by a rain of debris from the sky. Business is not OJ’s strong suit, and when he can’t find steady work for movie-trained horses, he’s left to pawn them to a local amusement park, Jupiter’s Claim, run by former child actor Ricky “Jupe” Park (Steven Yuen). OJ’s free-spirited sister, Emerald (Keke Palmer), crashes with OJ for a few nights with the intention of heading to more opportunistic digs. She’s not into the business side of business either, fast talker that she is. One fateful night changes both of their lives when the two of them notice not only a loss of electricity but the disappearance of their horses. Engaging local electronics tinkerer and alien conspiracy theorist, Angel (Brandon Perea), they believe they can capitalize on potential UFO/UAP (or unidentified aerial phenomenon) sightings bringing in some “Oprah” cash and literally saving the farm. However, whatever is hovering in the night sky over Agua Dulce isn’t ready to be seen and there are consequences for looking it in the eye.

In Jupiter’s Claim, Ricky has latched onto the unexplained phenomenon by capitalizing on the mystery of his own ghoulish accident. He’s desperate to reclaim the glory and high that comes from early celebrity and fame. Banking on his now classic hit movie “Kid Sheriff,” his desert oasis, Jupiter’s Claim, is a capitalist fantasy of the American Gold Rush, with a twist. This Old West town with its gold panning and steam train, also hosts a 6 pm show where in the center ring is one of Haywood’s horses, and everyone’s eyes are on the sky.

You think you know where Nope is going, and you’re almost half-right.

Nope is a modern western with Black cowboys, horse rustlers, and there’s epic (kind of) cattle rustling. It feels like reality, which is odd for a Hollywood movie where people usually only look sweaty and dirty when they’re working hard towards a “goal” and “effort” needs to be portrayed. Here, everyone is always sweaty and dusty, because that’s what hard work on a horse ranch in the desert looks like. Nope centers on the characters, primarily OJ and Emerald, who understand that thinking first and then carefully thinking again is the best way to stay alive. Their actions are deliberate and their words are chosen carefully, and whether this comes from raising and training movie horses or being the very few skilled Black faces in Hollywood, is potentially up for debate.

Nope is a little messy and I haven’t exactly put my finger on why. Not much is explained, like where did Jean Jacket come from, and are there others? Did Ricky Park attract Jean Jacket with his bright Wild West Show, or is he unintentionally keeping it from moving on by feeding it, like one might a stray cat at the back porch? They’re not nagging questions by any stretch, and they don’t detract from the overall film, but they’re there.

Nope is skillfully filmed, s shown by the title cards between acts, the slow pan between calm and action, and the last standing hero when the dust literally clears. The folksy companionable flashbacks between OJ and his father Otis (Keith David) passing familial wisdom and showing a working-class education, and filling them with advice that makes sense to normal people without sounding cryptic. The sibling dynamic between OJ and Emerald is another concrete example of how even stable upbringings can result in estrangement. They aren’t screaming at each other, they understand boundaries, their love for each other is deep and protective.

Do I have quibbles? Sure, but they’re minor. 40% of Nope was filmed in IMAX and while impressive, unless you’re watching it on a 32” screen at home, it’s not going to make much difference in the experience. I know the idea of filming in IMAX is about immersion, but Nope honestly isn’t about the experience of being there. The immersive quality comes from the connection to the characters, not whether or not you can taste the dust. Is Nope a Horror or Sci fi or Western? It’s all of it, and while that amalgamation may turn some people off, director Jordan Peele is able to weave the elements of each together so where one thread drops, another slips in to take its place.

Nope may not be the movie audiences are expecting, but it’s the one we’ve got and it’s pretty entertaining.

Nope is streaming now on the following services:
Powered by JustWatch