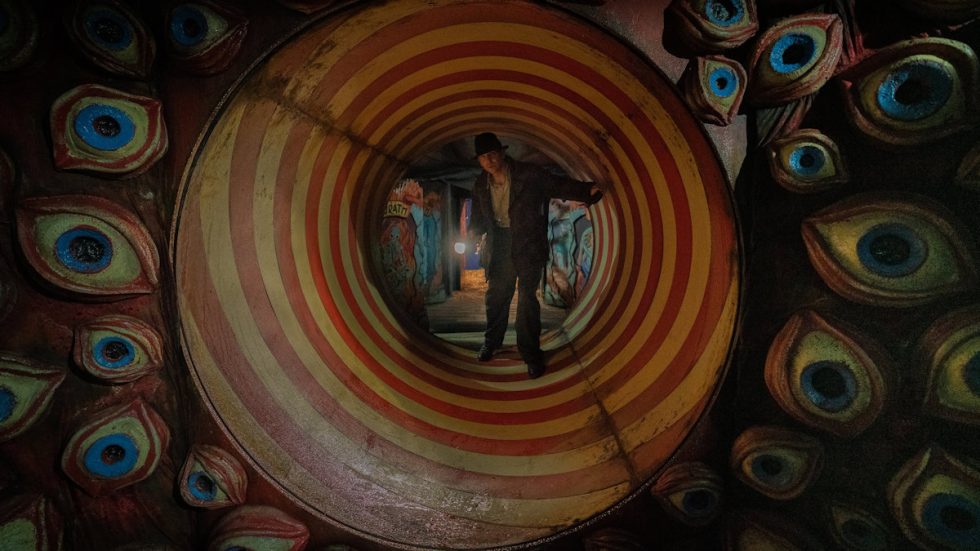 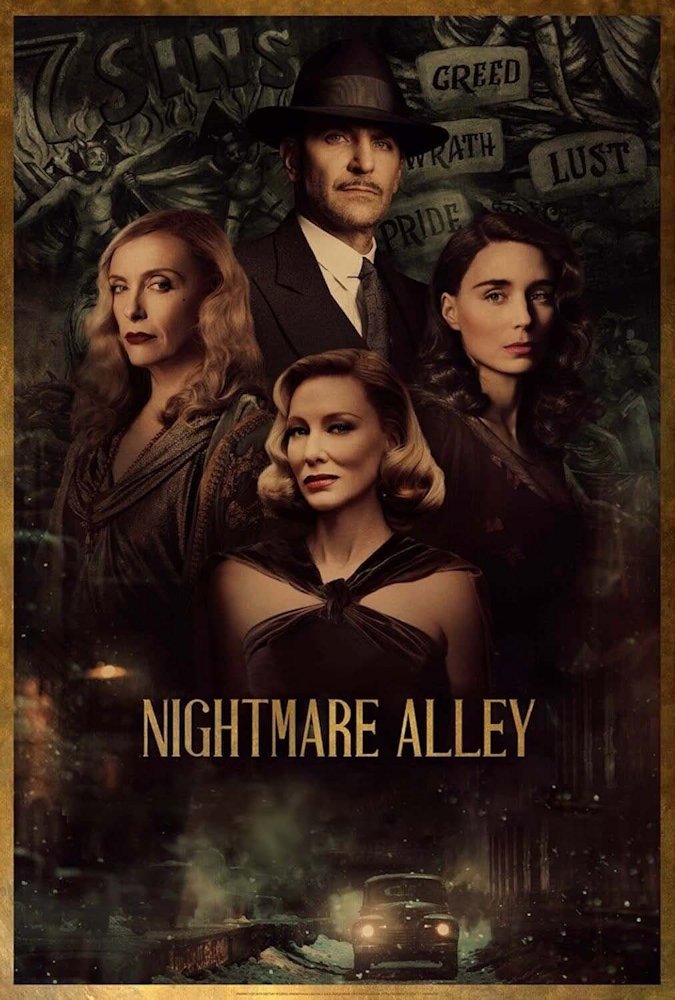 That seems harsh and unfair, but if a hallmark of del Toro is his surreal weaving of the supernatural into the mundane, Nightmare Alley is missing one of those elements. This is not to say the film isn’t lush and gorgeous, it absolutely is. It also feels hollow and superficial, but we’ll get to that.

Stan Carlisle (Bradley Cooper) finds himself in the company of a traveling carnival and he picks up work as security and geek-wrangling. He falls in with Zeena (Toni Collette), the carnival’s mystic who runs her show with her alcoholic husband (David Strathairn) by day and tends to handsome men like Carlisle by night whenever Pete is in search of his next shot. While learning the tricks of carnival life, Stan falls for Molly (Rooney Mara) running another act of mystical feats, and together, they run away from the carny life and embark upon a path whereupon they find fame and fortune. Stan and Molly become a successful nightclub act, performing a modified version of Zeena’s mentalist act when they meet Dr. Lilith Ritter (Cate Blanchette), who almost has Carlisle beat at his own game. Together, Ritter and Carlisle hatch a plan to separate the rich titans of high society from their cash. In a perpetual game of cat and mouse, or barker and mark as the carny life is, the mark is the least suspecting person in the game, and Nightmare Alley keeps that mark shifting.

To call Nightmare Alley moody is a gross understatement. Lightning-lit sepia tones give the whole film a throwback flavor and the caliber of acting from Bradley Cooper and Cate Blanchette strip “remake” out of the description. It feels like authentic 1940s noir, right down to the score by Nathan Johnson. The sets are meticulous, from the traveling carnival with its jars of oddities, to Ritter’s well-appointed high-rise office. The shift from filthy hand-to-mouth living among carnival family to the cold and lonely opulence of city living is a palpable one, best conveyed by Molly as she follows Carlisle from the carnival in the hopes of settling down and feeling loved. But his ambition to rise above his vagabond station only makes her isolation and unhappiness part of the costume that weighs down her entire character.

So where does Nightmare Alley fall short?

Holy Toledo, this movie is long! Meeting at the carnival, life at the carnival, it is forever before we leave the carnival for the last hour, and for a movie with no supernatural element, there is only the harsh lifestyle and quirky people. Del Toro excels at quirky dread, but since this is only the set-up for things to come, the time spent on these extensive character studies go on for too long. Stan Carlisle is a bad man with a sketchy past, and he manages to fall in with people who are worse with fewer scruples. Most of them serve little purpose except as a moveable backdrop.

Nightmare Alley may have been better served as a limited 6-ep series. There may have been more to tell about Ritter’s practice, and the corrupt people she counseled in her cavernous office. Because the film is carnival-heavy, the final third leaves a huge chunk out of the final story. The con and marks are barely mentioned, and for the meticulous groundwork of the carnival, how it’s supposed to go down is largely left to imagination. Del Toro shows how the mentalist sausage is made, but when it comes to serving up the main course, the portions are meager and there’s barely any sausage.

A remake of the 1947 film starring Tyrone Power and Joan Blondel, based on the 1946 novel by William Lindsay Gresham, del Toro reworks the story to more of a thriller mystery with Stan always on the run and unable to settle down.  Unfortunately he focuses too much on how Stan Carlisle plans on making it big, without giving the why and skimping on the payoff. If you don’t roll your eyes at the end, you’re a better person than I am.

Nightmare Alley (2021) is Rated R for swears, sexytimes, people getting shot, people getting stabbed, a murder-suicide that comes out of left field, medical oddities in cloudy jars, and that chilling grin Willem Defoe gives when his characters are up to no good.

Nightmare Alley is streaming now on the following services:
Powered by JustWatch