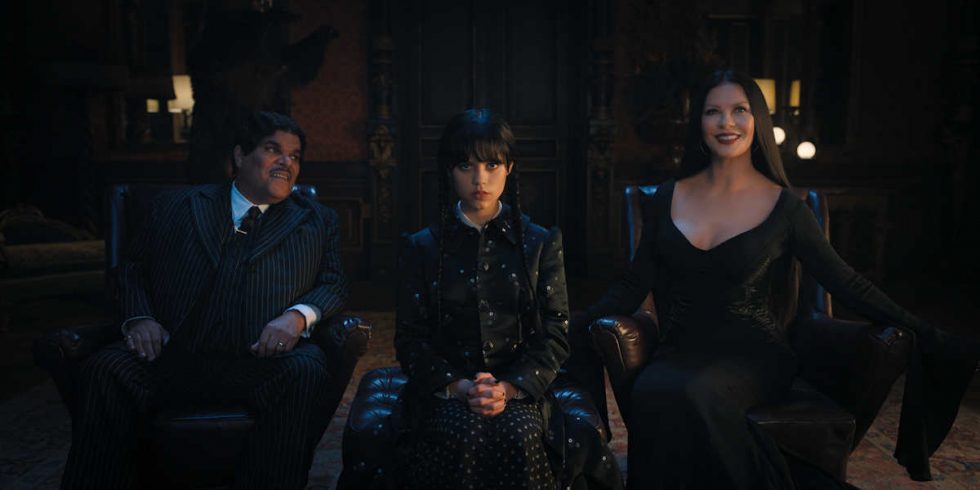 Look, there is no doubt that Wednesday (Netflix) will appeal to those of us who shop unironically at Hot Topic.

Most people know of the Addams family from the 1964 television series that ran for two seasons on ABC or the Barry Sonnenfeld-directed movies of the early 1990s. But Wednesday pulls from the true source material, short comics published by Charles Addams in the 1940s and 1950s. Morticia and Gomez Addams are an unconventional married couple, or unconventional in the sense that after two kids they still are deeply in love and remained devoted to each other and their family. In Netflix’s Wednesday, the Addamses find themselves with a delightful opportunity. Their oldest child, Wednesday (Jenna Ortega) finds herself expelled from yet another public school, not for academics but for endangering the lives of other students. Morticia (Catherine Zeta-Jones) and Gomez (Luis Guzmán) decide to send her to the exclusive Nevermore Academy, a school for literal freaks and outcasts. It also was where they met and fell in love, and they hope the school’s nurturing environment towards vampires, sirens, werewolves, shapeshifters, and hereditary witches will be the catalyst for helping Wednesday blossom into a more well-rounded young adult.

Meanwhile, Wednesday is experiencing full-blown teen angst. She wishes to be her own person, but feels she’s being molded into a version of her mother. She is anti-social, calculating, and likely has a borderline personality disorder, and what is Nevermore but high school for rich outcasts with the ability to eat the outcasts of the outcasts. She meets her new roommate Enid (Emma Myers), a pastel goth werewolf unable to fully wolf out, and her sunny disposition is Wednesday’s polar opposite. There is Bianca (Joy Sunday), a siren and self-proclaimed queen bee who delights in making the new kid feel awkward. Xavier (Percy Hynes), who attends Nevermore because of his famously psychic father is Bianca’s ex but may have designs on Wednesday. Larissa Weems (Gwendoline Christie) is the Headmistress of Nevermore and former classmate of Morticia and Gomez.

There is a mystery in the woods surrounding Nevermore as a creature of indeterminate size and species is murdering hikers and other locals. In the nearby town of Jericho, Sheriff Galpin (Jamie McShane) vows to solve the murders, fairly sure they have something to do with the supernatural creatures residing in Nevermore. His son Tyler (Hunter Doohan) runs the local coffeeshop, The Weathervane, and may also have designs on the weird new girl.

So far, this sounds like a decidedly less-sexy version of the CW’s Riverdale with its decidedly murderous plot points, and you’re mostly right, except it’s not. It’s darkly funny with small-town politics, small-town bigotry, and creatures both great and small. There is one overarching mystery over the eight episodes, with a few smaller week-by-week mysteries that wrap up with a little-too-neat bow, but this is the Addams family. All of their stories had happy endings, and no one was permanently maimed.

Jenna Ortega is the standout, carrying each episode with darkly acerbic wit and a dead-eye gaze. The episodes are horror-light, making them appropriate for most ages. Yes, there’s blood and slashing and people die, but it’s never anyone a plot is hinging on.

What I like best about Wednesday is that for a series directed by Tim Burton, it doesn’t scream Tim Burton. Yes, there are bug-eyed creatures and the monochromatic stripes are ubiquitous, but it’s so subdued, it feels like an homage. This is a good thing because when Tim Burton is allowed to be Tim Burton, it’s visually exhausting.