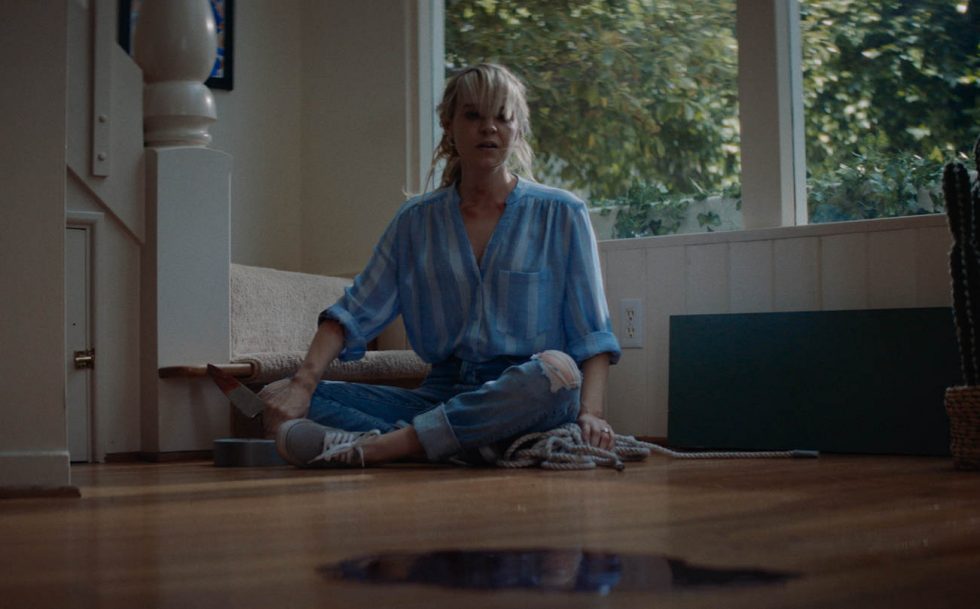 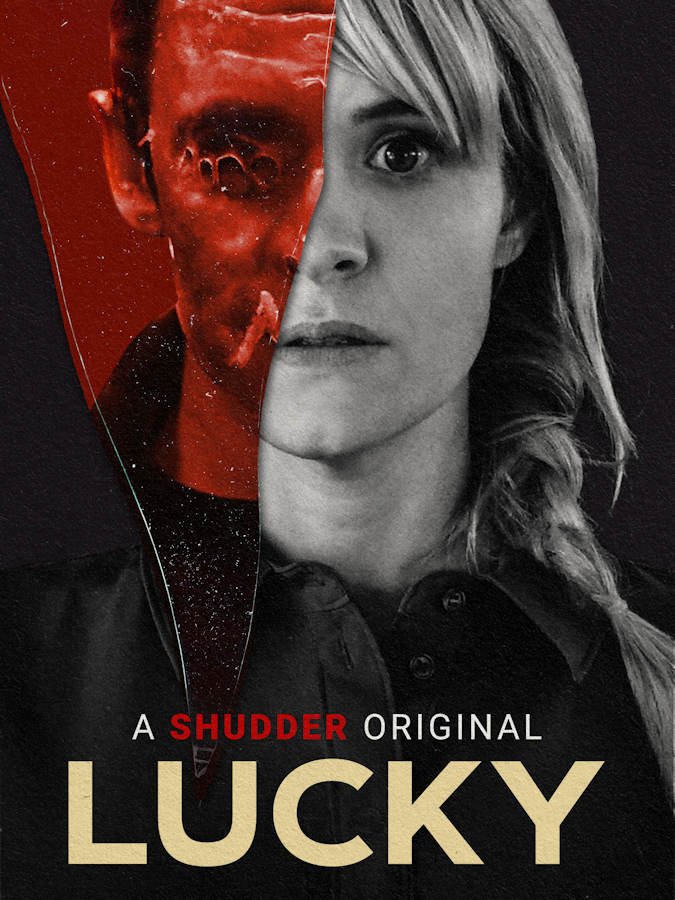 In Lucky (2020), streaming exclusively on Shudder, every night a man breaks into Mae’s home and tries to kill her. This is apparently news to her, but her husband Ted seems to know all about it. In fact, everyone around her seems to take this news in stride, from her assistant (Yasmine Al-Bustami) to the local police (Larry Cedar). Everyone is busy with busy work of simultaneously investigating the issue and pretending it doesn’t exist.

Mae (Brea Grant) is a take-charge kind of person, wanting the company and companionship of others but needing to do things on her own. When Ted (Dhruv Uday Singh) leaves after a fight, she’s left to deal with the nightly break-ins on her own. Every night The well-dressed man with the great hair (Hunter C Smooth) breaks in, every night she seriously maims the intruder, every night he disappears. No amount of security or vigilance will keep him at bay, and Ted, her supposed rock, is nowhere to be found. Over and over again, she’s told how lucky she is, lucky to have a book deal in a tough market, lucky to be so successful, lucky to have all of the answers, lucky, lucky, lucky.

Behind the scenes, though she feels anything but lucky – she’s attacked every night, gaslit by everyone she comes into contact with, and life is literally cracking in every facet of her life. Mae isn’t sure she can continue to go it alone believing that her life is a never-ending terror of waking up to fight the same unending battle of fear and trauma.

And worse, everyone is acting So. Weird.

Much like After Midnight (2021), Lucky is a slow burn of character development, set design, and very strong writing. It could be mistaken for a “time-loop” movie if you’re paying attention, but it’s deeper than that, in fact, time works just fine, thank you. The trauma of existing as a woman, however, living day after day with the same dismissive questions, shallow conversations, and threadbare platitudes of how “this is just the way it is now,” is the terrifying loop. Brea Grant pens a tale of being a woman in the 21st Century, the expectation to be so blasé about everything from our damage to our exhaustion and the physical manifestation on our bodies. Director Natasha Kermani films everything in the soft pastels and stonewashed denim of modern womanhood, with a subtle off-kilter lens that becomes pronounced as the movie progresses.

If I have a quibble (and I do) it’s that Lucky feels less like a horror movie and more like an episode of The Outer Limits or maybe Black Mirror. There is nothing supernatural about the trauma Mae experiences, and as it happens to more and more women who “Go It Alone”, the title of her successful self-help book, the reality of the now manifests as a dream no one can wake from. There are more endings I would have found satisfying, but the one it has is okay. This is just the way it is now.

Lucky (2020) is unrated and streaming on Shudder, but if I were to give it a rating, I’d go for PG-13 for swears (lots of swears), people getting stabbed, people getting maced, people falling down stairs, violence against women, and the realization that very little of it will get any better.

Lucky is streaming now on the following services:
Powered by JustWatch