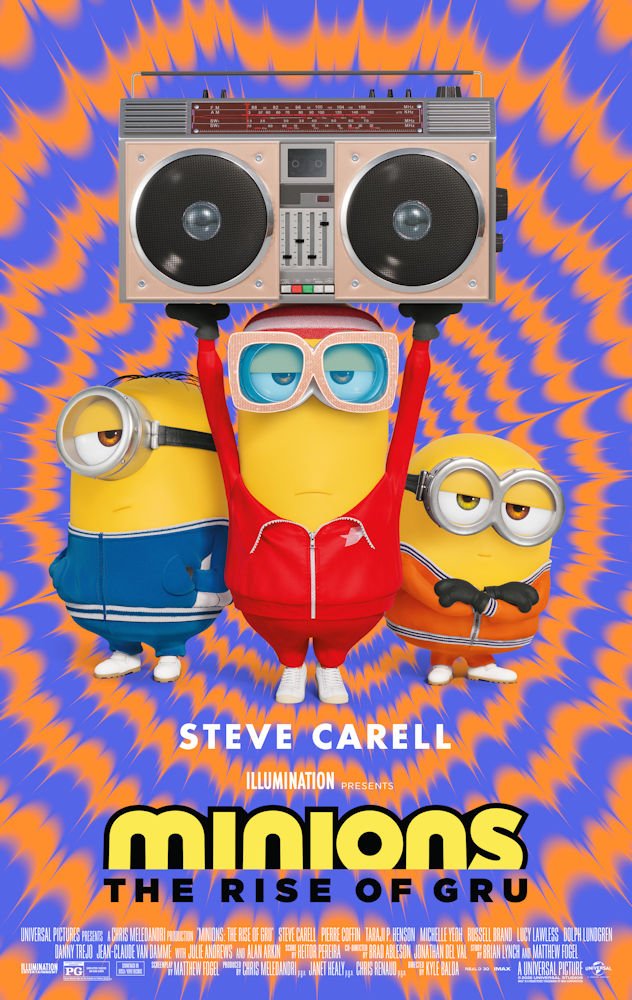 MInions: The Rise of Gru

Minions: The Rise of Gru (2022) is a deceptive title. This sequel to the 2015 prequel to the 2010 Illumination animated movie Despicable Me is the fifth in the series and is wholly a Minions vehicle. After all, those sentient yellow Tic Tacs with goggles and blue denim overalls who follow Gru’s orders with blind psychopathic loyalty are too cute and far too marketable to leave by the side of the road. That said, this installment may as well be called Minions Get Up to Dickens, Again. If you’re a fan, I can’t see where you’d find fault in any of the nearly 90 minutes of enthusiastic controlled chaos. The rest of you will have to learn to subtly check your watches without looking obvious.

It’s 1976 and nearly 12-year-old Gru (voiced by Steve Carell) already knows what he wants to be when he grows up. Vocations like Ballerina and Fireman-Racecar-Astronaut are far too pedestrian for him. He sets his sights on joining the Vicious 6 – a supervillain organization that prides itself on marketing its image rather than subtle low-key public heists. His hero is Wild Knuckles (Alan Arkin) and Gru has desperate aspirations to train under him and be the best of the worst. Meanwhile, things in the Vicious 6 have gone sideways for Wild Knuckles as he’s double-crossed by his team, now led by ferociously-fro’d Belle Bottom (Taraji P Henson). This movie isn’t going for total originality, so just chuckle politely and read on.

With the recent job opening, Gru has received his invitation to interview with the Vicious 6, but due to his age and his size, they underestimate his lack of impulse control and the depth of his desire to impress ruthless villains. He steals the coveted Zodiac Stone, making him a kidnapping target between rival gangs. This leaves his Minions, Kevin, Bob, Stuart, and Otto (all voiced by Pierre Coffin) to save their MiniBoss, and prove themselves worthy hench … things.

You’d think that would be a lot for 87 minutes. Hang on to that.

Make no mistake, despite the title, Gru is more of a secondary character. As the Minions set off to save him, Gru fades into the background. He doesn’t so much “rise” as “fall up” since 90% of his villainy is dumb luck and excellent timing. We follow the Minions from a birthday party, through Death Valley to San Francisco, where they meet a master martial artist who helps them solidify their skills and develop the confidence to save their boss. Minions have their own brand of violent camaraderie and wacky adventures, which is the only reason people are still plunking down money to see this in theaters, as well as snatching up merchandise. Minions: The Rise of Gru is very kid-friendly, more so than the recent Disney/Pixar release Lightyear (2022). Every emotion, whether silly or serious, is worn on the faces and sleeves of every character. We’re talking base emotions, like fear, joy, anger, and confusion, so even if you miss the rapid-fire dialog and gibberish, it’s not hard to follow. While Gru finds disappointment in his heroes, the Minions find renewed purpose. It’s oddly touching, without being heavy.

This is not to say Minions: The Rise of Gru isn’t funny, because at times it’s absolutely hilarious. The absurdity of situational comedy – hosting a Tupperware party, hijacking a plane, learning martial arts – with the near-pathological devotion to Gru means the Minions never lose focus of their mission, even when they take the scenic route. That works in this movie’s favor since this story is light on plot. There is still a lot to see and note in the background, but it’s busy in a way that isn’t exhausting.

The secondary story of the Vicious 6 has a little more meat on its bones for a B-plot and asking why the villains are doing anything is pointless, so just don’t. Their very specific quest fleshes out Minions: The Rise of Gru with chase scenes and a fantastical fight with the Chinese zodiac, but it’s not exactly adding depth. It does provide for a colorful visual salad – Bell Bottom is in bright purple, Nun-Chuck (Lucy Lawless) is a sinister sister, Jean Clawed (Jean-Claude Van Damme, of course) has a monstrous lobster claw, and Wild Knuckles, who looks like Willie Nelson without the beard. It might seem like a waste of high-powered talent, but without them, this would not be a feature-length film.

Minions: The Rise of Gru is the definition of a Spopcorn movie, and you don’t need to have seen the previous films to understand what’s going on. It’s a light happy diversion with solid giggles. Illumination may be running out of storylines for the Minions that are better suited for shorts and filler, and that’s okay. Too much of a good thing can wear a person out, or the light on your watch.

MInions: The Rise of Gru is streaming now on the following services:
Powered by JustWatch