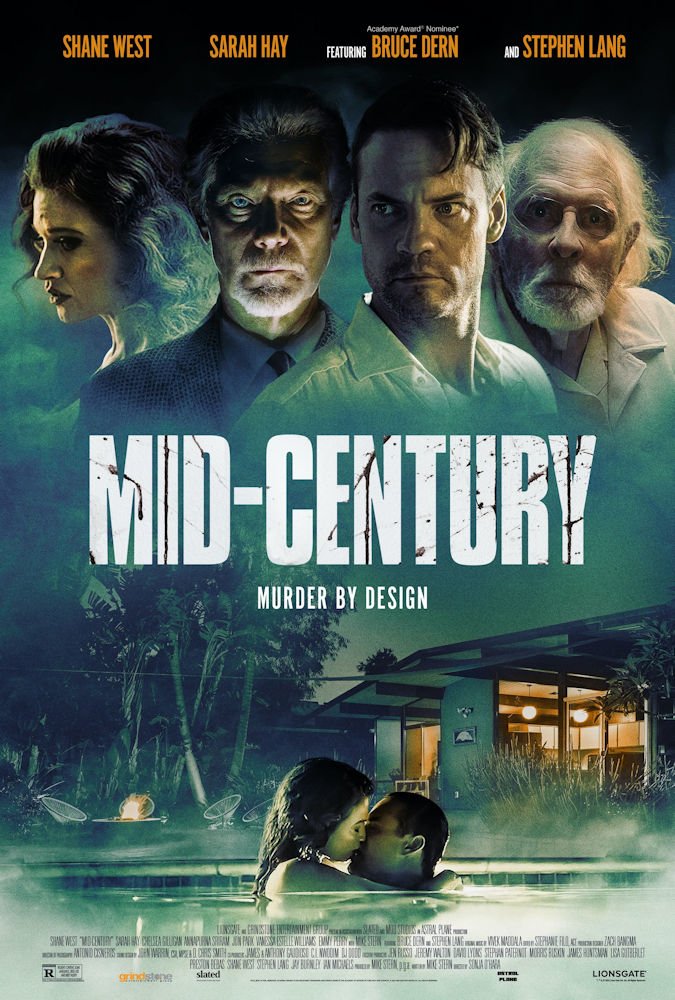 Gifted with the opportunity to spend a weekend in the house of his dreams, Tom Levin (Shane West) finds himself caught between worlds in Mid-Century (2022).

Architect Tom is between feelings with his ER wife Alice (Chelsea Gilligan). She is looking to change hospitals as she’s experiencing harassment at work. Tom is stuck after nearly failing a large client who expected more from his potential, and finds himself rudderless and without inspiration. Feeling emasculated and useless, he doesn’t want to be the stay-at-home husband. Desperate for a change of scenery and a chance to get away, Alice rents a well-appointed Mid-Century home, designed and lived in by famed architect and Tom’s personal idol, Frederick Banner (Stephen Lang). As their weekend progresses and Alice is called back to work, Tom experiences an ominous presence and corner-of-the eye apparitions. Through flashbacks, the audience knows what Tom cannot – that something sinister seeps through the soffits, and Banner’s influence may not be as far in the past as believed.

Mid-Century begins as a solid “young couple in peril story,” where everything is so perfect it can’t help but go wrong. Director Sonja O’Hara presents a stylish, well-paced thriller with a turn that tips the story into unexpected territory. Screenwriter Mike Stern weaves together a little Lovecraft and a little Jackson, and with a little Castle thrown in for good measure.

The architectural term is Eclecticism, mixing multiple styles into one structure, and that’s what Mid-Century is, multiple genres all fighting for space. It’s a lot for where it’s going, but at least it’s nice to look at. What Tom and Alice are lacking as fully developed characters, is made up for by not falling into all of the expected tropes of a put-upon man and damsel in distress. What the story is lacking cohesion is shored up by visceral images and effective flashbacks. With ghosts, rituals, possessions, cabalistic cults, murders, and disappearances – it’s a lot to wrap up, even in 105 minutes.

I would have liked a little less exposition in the second act and a little more consistency in the third, but Mid-Century is carrying a lot of weight on its shoulders. There are a lot of characters who run out of things to do and feel shoehorned in. Information is missing, like whether the structure (any of his structures) was evil by design or did he literally fall into his misdeeds by happenstance. Do they all attract cultists or is that a special feature of the house? Shouldn’t there be more ghosts?

Admittedly, Mid-Century is loose, but it’s casual ghost-murder-cult-horror that showcases the potential of both screenwriter and director.

Mid-Century is streaming now on the following services:
Powered by JustWatch