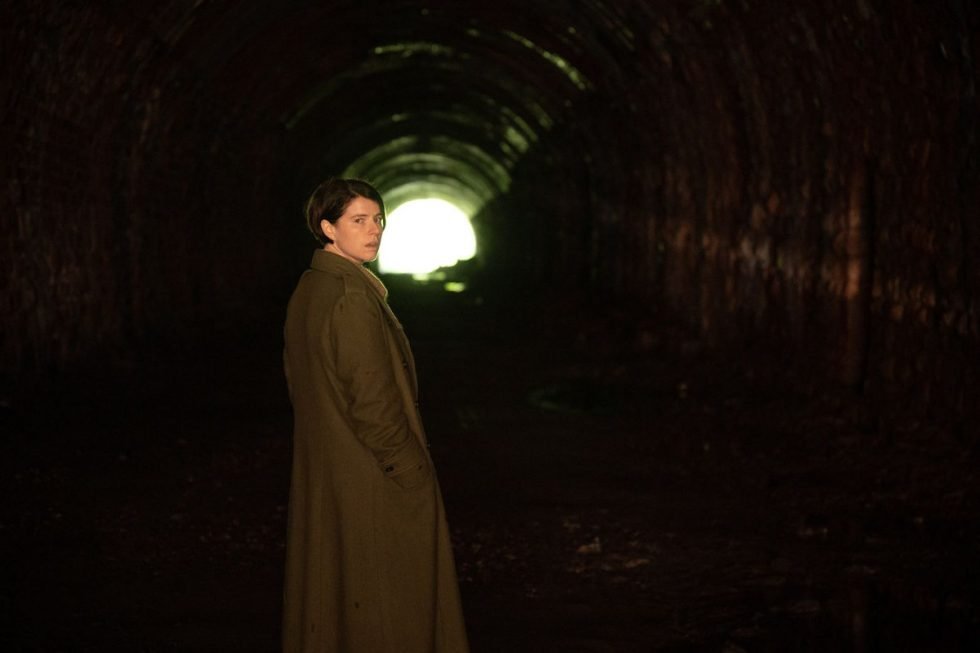 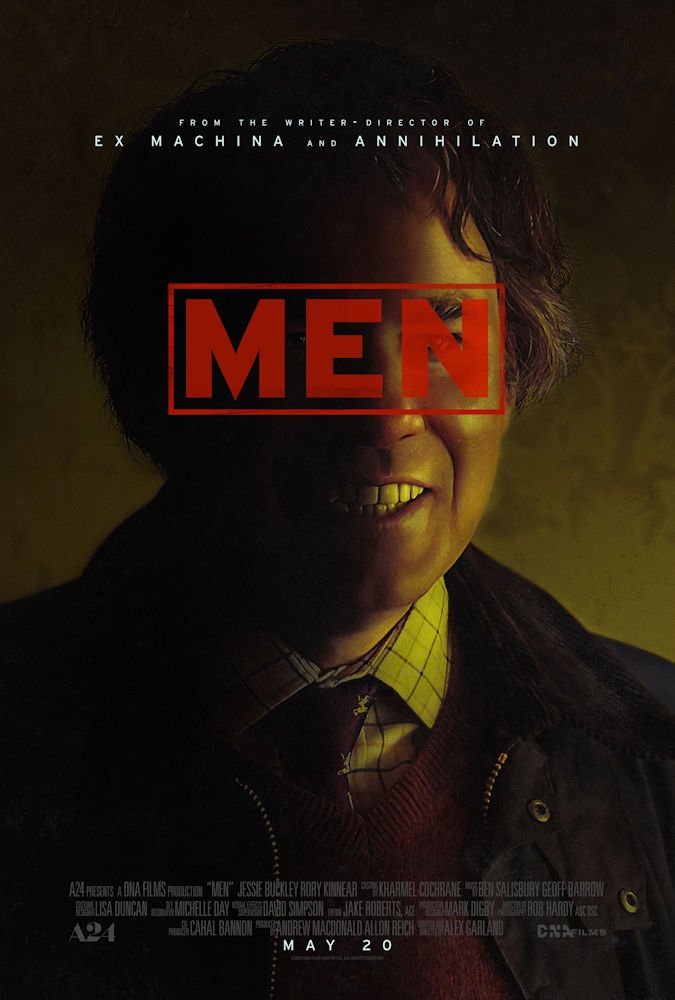 Like many Alex Garland movies, Men (2022) starts out straightforward enough. Harper (Jessie Buckley) has taken to the country for two weeks of rest and recollection after the suicide of her husband, James (Paapa Essiedu). Life with him, an abusive narcissist, was traumatic enough, but his death was worse. Now in a secluded country manor, rented by the delightfully odd Geoffrey (Rory Kinnear, in the first of multiple roles), Harper has a strong cellular signal to keep her grounded and in contact with her friend, Riley (Gayle Rankin).

As idyllic as her surroundings, there is always the specter of the other shoe waiting to drop. Upon arriving, she picks an apple from the tree in the garden and takes a bite. Geoffrey notes it’s forbidden fruit and it’s as subtle as a 2×4 to the face. This is a man who spends a lot of time in his own company and his country charm is awkward and cornball, yet presumptuous, as he assumes Harper is married. The fishing for information is innocent enough on the surface, but she lies about her relationship status because she feels she must, to ward off any perceived advance. It’s unfortunately a natural reaction to inquiries from strange men.

After a walk through the woods, she attracts more unwanted attention in the form of a naked stalker (also Rory Kinnear). She seeks solace in a nearby church and is verbally abused by an ill-mannered child (Rory Kinnear, again) while being sexually harassed by the vicar (you guessed it, Rory Kinnear). Whether she is aware, she makes no mention of it in her calls to Riley, every man she encounters wears the same face. In the church, carved into the stone altar, are the Green Man (ancient fertility god) and the Sheela-na-gig (no one really knows what she’s for), forever on opposite sides and complete mysteries to one another. Garland doesn’t bother with an explanation, but both display the powerful imagery of doorways to the unknown and the birthing of mysteries. As an aside, this type of iconography is pervasive all over Ireland and the UK, to the point where it’s nearly invisible. If you see it everywhere, you simply stop seeing it, like the microaggressions Harper experiences literally everywhere in every man she encounters.

Men at its core is about the horror of women who just want to exist, but at every turn, there is a man who desperately needs something – a playmate, a partner, a mother.

Men will be polarizing, there are no two ways about it. If you’re expecting a straightforward film about the trauma of being a woman, I can point you in the direction of any number of “women in peril” films to satisfy that itch, but this isn’t one of them. Harper doesn’t need saving, not even from the naked creepy stalker. She isn’t even in peril, that part of her life is over with the death of her husband, but miles away around every corner, if out for a stroll, in for a drink, a moment alone with her thoughts – there’s some man who wants something.  The pervasive smothering that teeters along the razor’s edge of polite conversation is in every interaction. Every man is an echo of the one who deliberately and violently left her – kind, petulant, aggressive, dismissive – and therefore no matter where she goes, it is indeed, yes, all men.

This isn’t a movie for fans who want to watch grotesque body horror, although Men has that, or home invasion movies, because Men has that too. You and your companions may head out for coffee after or discuss it on the car ride home, but you may not be able to agree on what it is you just saw, the critics certainly can’t. We’re just as baffled as you. Garland never gives easy answers and his films and series, Ex Machina (2014), Annihilation (2018), Devs (2020, Hulu) do not bother with explanations. Men is allegorical horror like Alejandro Amenábar’s The Others (2001) and existential horror, like David Cronenberg’s, well anything, and manages to nestle comfortably with both, offering nothing in the way of a why or a how. It is going to have something and nothing for everyone. It is baffling and intriguing and grotesque and beautiful and it deserves a second and third watch.

Men is streaming now on the following services:
Powered by JustWatch