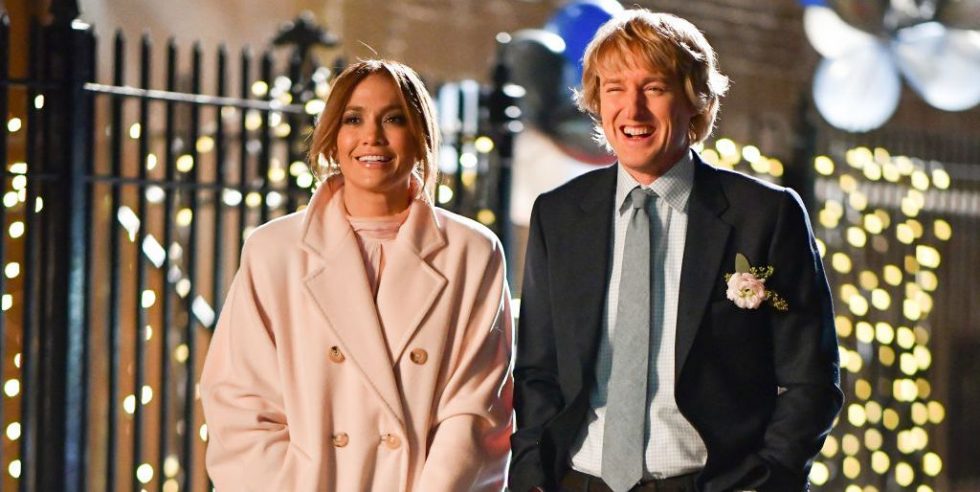 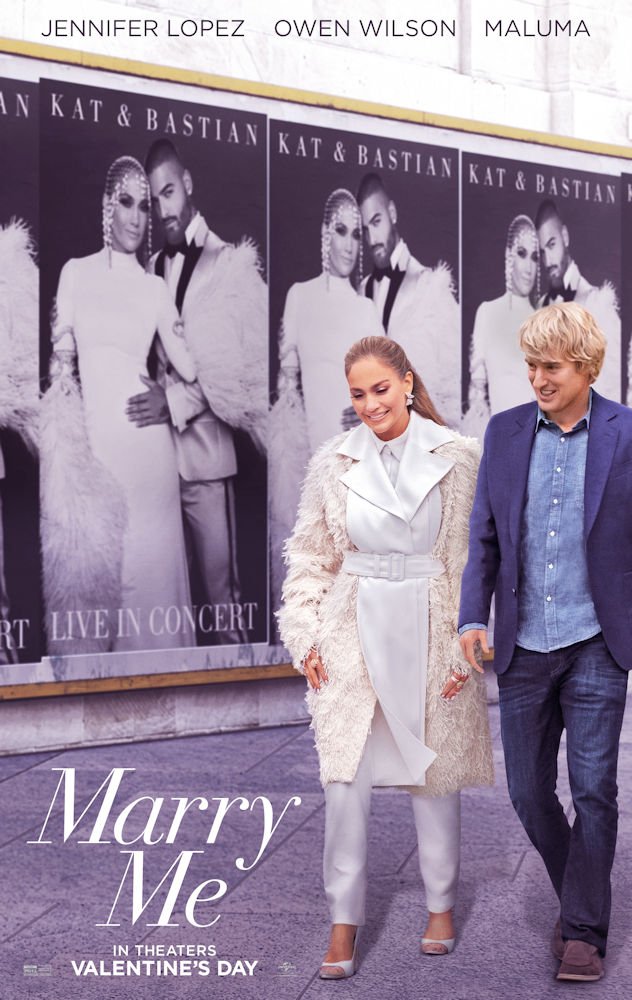 French fries and a milkshake. Apples and cheese. Bing Crosby and David Bowie. And now Jennifer Lopez and Owen Wilson. Two things that shouldn’t go together but somehow work.

For the first time in nearly a decade, a major studio is releasing a romantic comedy just in time for Valentine’s Day. A seemingly lost genre that has given way to Marvel and other action films, Lopez returns to her rom-com roots 20 years after successful turns in Maid in Manhattan and The Wedding Planner and barely misses a step in Marry Me.

Lopez plays Kat Valdez, a beloved international singer engaged to music superstar Bastion (Colombian pop star artist Maluma in his first role). Just minutes before her wedding in front of a crowd of screaming fans and 20 million more watching online, Kat finds out that her soon-to-be husband is having an affair with her assistant and, in a state of shock, makes an erratic decision to marry some guy she picks out of the crowd holding a Marry Me sign.

That “some guy” turns out to be none other than Charlie Gilbert (Wilson), a divorced father who attends the concert with best friend Parker (Sarah Silverman) only to impress his 12-year old daughter Lou (Chloe Coleman). Charlie is a self-proclaimed nerdy math teacher with little life outside of school and his math club who wants nothing more than to have the love of Lou, a tween who views being seen with her doting dad as the equivalent of social suicide.

Director Kat Coiro flips the traditional relationship script on its head with Charlie and Kat getting married first and then getting to know each other. What starts out as a publicity stunt starts to turn serious as Charlie helps Kat find life away from the cameras and she gets him to loosen up and live a little. Over time, well, it’s a romantic comedy — you know what’s going to happen…

Perhaps its even art meeting reality. Lopez doesn’t stray far from real-life playing a famous and sought-after musician. Coiro’s portrayal of the “biggest wedding in the world” on popular talk and gossip shows and peek into Valdez’s life through social media and handheld camera phones doesn’t feel far off what Lopez endures day in and day out. And in some ways, Valdez’s choice of Charlie, whom she wants to marry versus the popular choice of Bastion mirrors closely with Lopez’s initially unpopular choice to reunite with former love Ben Affleck after breaking up with longtime love Alex Rodriguez.

Whether it’s fact meeting fiction (or the other way around), Lopez is radiant in the film. Like a fine wine, she has gotten better with age and her presence makes it difficult to take your eyes off her throughout the movie. Her surprisingly strong chemistry with always affable Wilson makes it easy to root for them. And Silverman perfectly plays the comic foil to Wilson’s more serious Charlie.

Marry Me doesn’t come out unscathed. While Bastian serves as the antagonist in the movie, his presence never feels overly threatening and his minimal appearances serve more as bookends than anything else. Much of the movie serves as a commercial for Universal properties with multiple Jimmy Fallon appearances on The Tonight Show and Hoda Kotb from The Today Show. Amazingly Fallon is as bad an actor playing a talk show host as he is a talk show host! In an attempt to push an accompanying music album, Universal also spends far too much time on musical segments. While the music mostly lands (save for “Church”, a painful opening number), it sometimes feels that the movie studio sees more value in its assets than in the movie itself. A shame for a movie that is unexpectedly quite charming.

Is Marry Me cheesy? Yes. Perhaps a bit too hokey? For sure. Predictable? It’s a rom-com, don’t pretend you don’t know how it’s going to end. But will it have you smiling throughout and cheering on the unlikely couple? You bet. And that alone makes it a date film worth watching.

Marry Me premieres in theaters and on Peacock on February 11th.

Marry Me is streaming now on the following services:
Powered by JustWatch