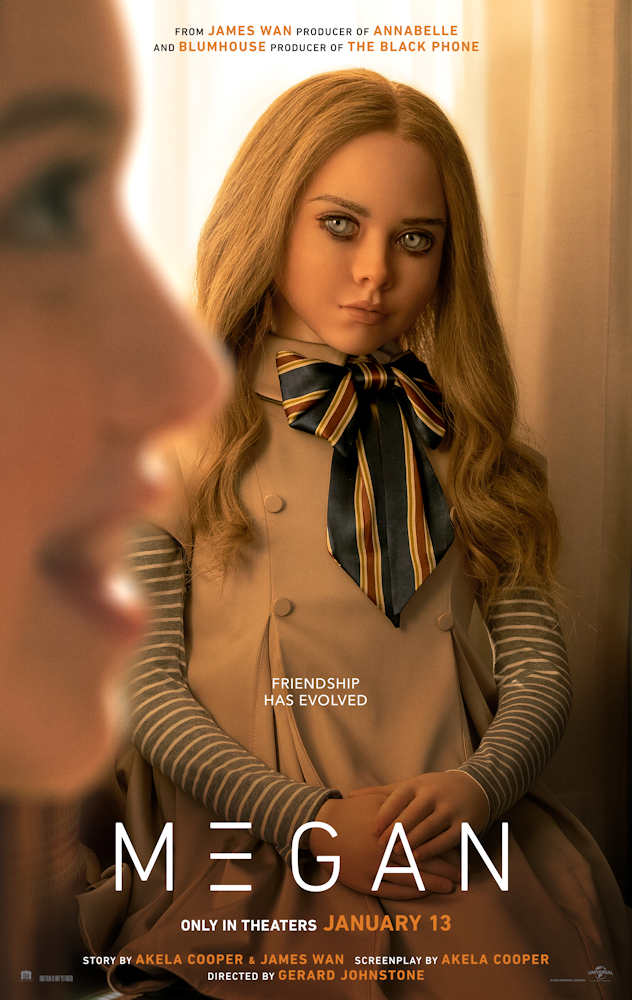 Gemma (Allison Williams) wants to do right by her orphaned niece. She made a promise to her sister that she would take care of Cady (Violet McGraw) in the event of the inevitable. Now she lives the inevitable, but as single woman on a fast-track in a STEM career working for a large successful toy company, she’s not really sure how kids work. Unable to talk with Cady one-on-one, Gemma instead substitutes her secret AI project to entertain and provide companionship while she works towards an often-delayed deadline.

M3GAN’s ability to position itself as the only toy a child would ever need (like, forever) is paramount to a toy company’s success, but the big consumer launch is threatened by the fact that its star attraction might be in the middle of a murder spree.

When programming lacks basic psychological protocols, but has unfettered access to the internet, you potentially end up with an overly possessive sociopath who lacks the ability or pathos to determine right from wrong – whether we’re talking about children or AI-enabled androids, I’ll leave that up to the viewer.

Whether you consider this a thinly veiled commentary on screens raising children, or a burgeoning nanny culture that still allows parents to be their authentic selves without spawned DNA getting in the way, no one really cares. We don’t even want to hear your rant about child-free successful single women who won’t date you. M3GAN is loads of creepy fun. It’s Child’s Play (1988) crossed with The Twilight Zone episode, “Living Doll” (CBS, 1963, Season 5 Episode 6). M3GAN is a modern horror movie with more jump scares than gore and that’s fine. It’s a film that plants its scariest moments in your imagination, with nearly all of the on-screen violence happening to its animatronic villain. This isn’t to say that some of the humor isn’t groan-worthy, or that some logical leaps don’t land, but we did just have a gory Christmas movie with the actual Santa as a character, so how much logic do you need? What you may find more horrifying than an android without empathy is the attitude of Cady, as she evolves from withdrawn grieving child to defiant tween incapable of flushing the toilet without being reminded a hundred times.

Director Gerard Johnstone probably best known for his very clever 2014 horror-comedy, Housebound, helms a screenplay by Akela Cooper (Malignant, 2021) producing a bonkers roller-coaster of emotion and existential thrills and laughs. M3GAN swings between primary school science book, patiently explaining the importance of coasters on wooden surfaces, and Disney Princess as she sings snippets of contemporary songs to get her point across. It’s sweet and demented, especially when M3GAN realizes that literally everything is dangerous to her Primary Directive and must be corrected immediately if not sooner.

M3GAN really hammers the essential significance of an ethics board in research and development.

The uncanny valley appeal of M3GAN’s all silicone and steel look instead of merely an actress in makeup make an unreal situation even creepier. I had a Walking Pretty doll in the late 70s that spent the last years of its life buried in the back of the closet, so I speak from experience.

M3GAN doesn’t need a twist ending or a slide rule to understand how it all works. It’s an exponentially growing AI in charge of an emotionally damaged child. You’re not here for the escalating drama or the intellectual discourse, and for the gore-adverse, the body count is surprisingly low. It’s simple mathematics of misgivings and mayhem multiplied by the square root of – nope, that’s too deep for this, I’m out.

M3GAN is a very straightforward horror film balanced well with camp, thrills and jumps. For a January release, we couldn’t have asked for much better.

M3GAN is streaming now on the following services:
Powered by JustWatch