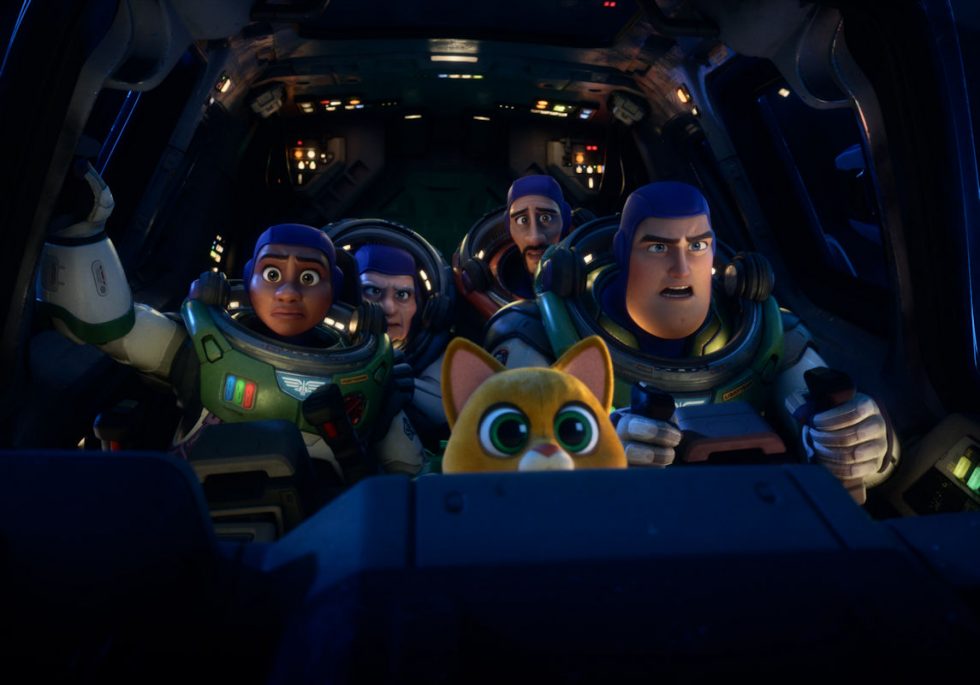 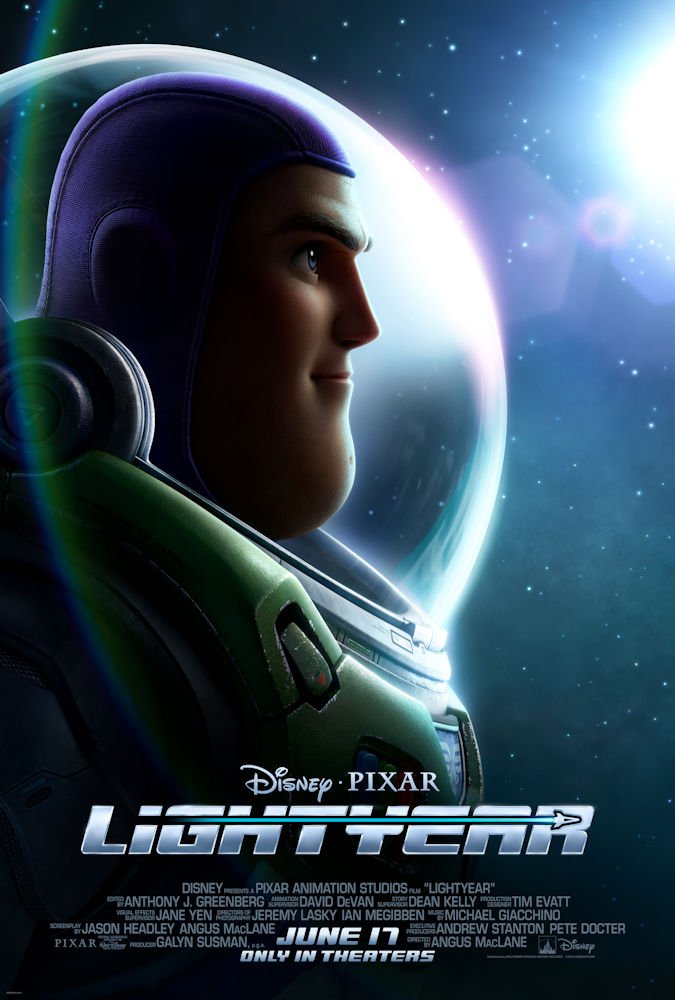 Hang on – we’re going back in time a little. Lightyear (2022) is not an origin story nor a prequel, but an in-universe movie we have to pretend debuted 27 years ago. This is the movie that featured a character that became one of Andy’s favorite toys in the 1995 Pixar animated movie, Toy Story. When Andy brings home Buzz for the first time, he’d just seen the movie and had to have the action figure, sparking the original rivalry between Woody and Buzz.

In Lightyear, Space Ranger Buzz Lightyear (Chris Evans) and Commander Alisha Hawthorn (Uzo Aduba) unexpectedly land on an earth-like planet and disembark to briefly explore. Still aboard their massive ship in cryogenic sleep are over 1,000 scientists and techs heading home from their latest mission, with another 4.2 million light-years to go. Too late, they learn T’Kani Prime isn’t as idyllic as the greenery and trees would suggest, with carnivorous vines and insects grabbing everything that moves. In an attempt to escape, Buzz makes a tactical error and strands all of them on an inhospitable planet.

It’s a recurring motif – while trying to go it alone, in some misguided effort to save the world, Buzz usually manages to make things worse. This is not to say he’s incompetent. On the contrary, Buzz is a skilled and decorated pilot with a maverick daredevil streak. He’s driven to correct his error and finish the mission to get everyone home, even if the test flights to near-hyperspace cost him several years of time on T’Kani Prime, while only a few minutes pass for him.  After returning from his latest flight, the little colony planet is surrounded and taken hostage by hostile robots. With his new allies, Junior Cadet Izzy (Keke Palmer), convict and self-taught pyrotechnical expert, Darby (Dale Soules), and weekend warrior in over his head, Mo (Taika Waititi), Buzz has a plan to destroy the robots, free the colony and complete the mission.

Lightyear is a story about spending an entire life trying to correct a mistake and missing out on actual life still happening all around. As Buzz makes attempt after attempt to make hyperspace, his friends and colleagues grow old around him, but all of them are making the best of a lousy situation. They can all look past his mistake and make new paths for themselves. He remains in a weird stasis, stuck on regret. It’s a deep, introspective story, galaxies away from the Toy Story franchise, and that could prove problematic for littles bringing their favorite Buzz toy into a theater for 100 minutes. I can’t speak for all potential movie-going tykes or how invested they might be in a Buzz Lightyear story, but the kids at the screening I attended got antsy well before the 1-hour mark.

Lightyear is as bright and colorful as you’d expect from Uncle Disney and Auntie Pixar and the animated sci-fi action is about as farfetched as you can get (for a movie based on a character from an imaginary movie that became a toy – that became a toy). All of it is easily set aside because it isn’t science or even reality that drives this film. Much like Finding Dory (2016) wasn’t about how fish talk in the ocean, writer-director Angus MacLane chooses to center Lightyear on the very real emotions that define and drive blind determination. Chris Evans delivers a tangible pathos in Buzz Lightyear, and his voice is so close to Tim Allen’s original, your ears do a double-take. Keke Palmer’s Izzy has an infectious enthusiasm that wants to make her grandmother proud. I’m sure my favorite character is SOX, the emotionally disconnected emotional support robot cat, who vocalizes his search functions (pebo-pebo-pebo) and shoots tranquilizer darts. I hope there’s a meatworld toy of him.

For all of its space jumps, aggressive vines, and talking cats, Lightyear is a great film for adults that maybe you could take your young kids to if they had an iPad to play with. It’s not overly emotional, you’re not going to weep at any death scenes, and there’s plenty to cheer about at the end. It’s a solid family movie with a lot of heart and clever laughs and there aren’t enough family movies that don’t have sassy teens or idiot adults. I would, however, aim this squarely at the 9-and-up set. For a fully immersive experience, see it in IMAX. Then maybe ditch the kids and see it again.

Lightyear is streaming now on the following services:
Powered by JustWatch