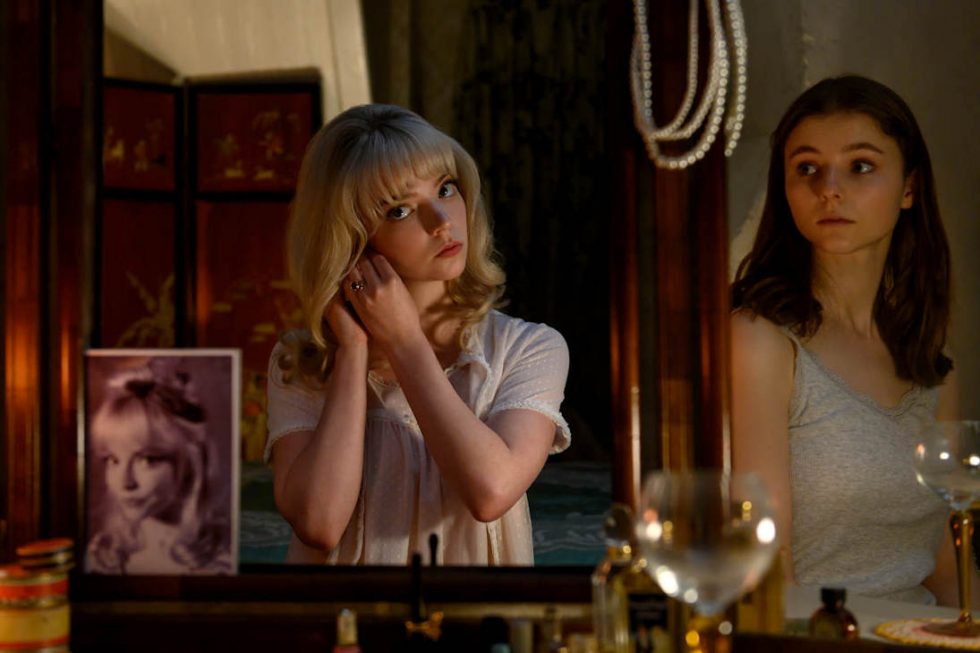 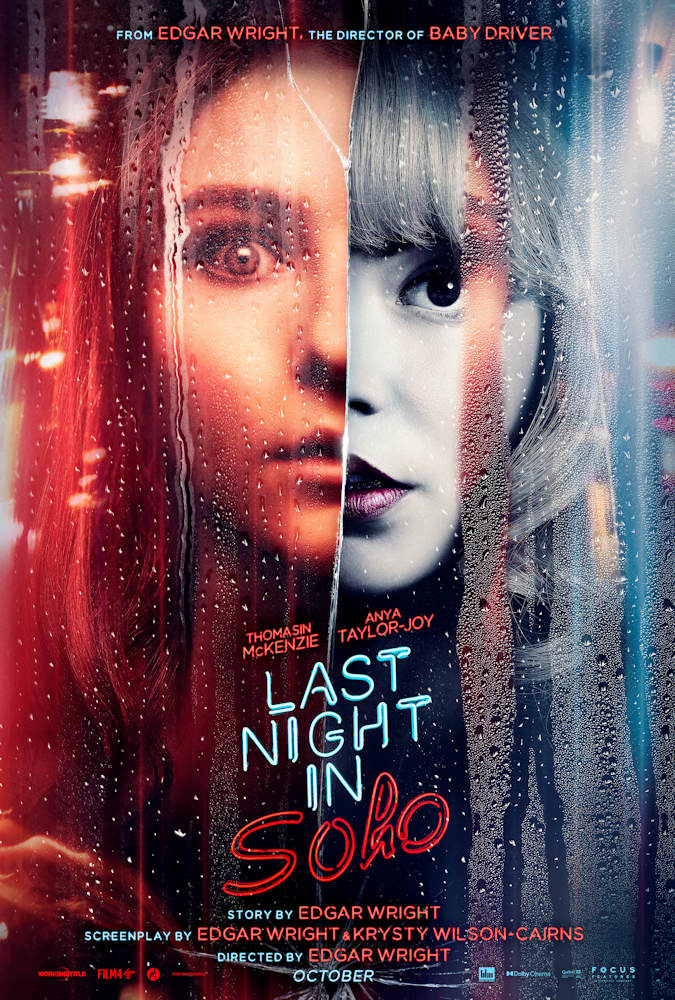 I can admit that as a movie reviewer, my personal tastes are narrow and dare I say, exclusive so that I’ve never seen an Edgar Wright movie should surprise absolutely no one that I was unprepared for what to expect from Last Night in Soho (2021).

Ellie (Thomasin McKenzie) is a bit of a fantasist. She dreams of being a fashion designer, like her late mother wanted, like her gram encouraged both to pursue, but Ellie is determined to make happen. She’s accepted into the only school she would ever attend, the London School of Fashion, in the heart of London, and of course, dorm life isn’t anything like she expected – and frankly, that’s not a stretch. Her roommate is catty and cruel, the parties are endless, and she just doesn’t fit in. her peers are deep into the modern fashion designers but her first love is the 60s, the retro a-lines, the flowy chiffon, the cotton candy colors. She ditches dorm life and moves into a bedsite maintained by Ms. Collins (Diana Rigg), and the room hasn’t seen a coat of paint or a curtain change since Harold Wison was the Prime Minister. It’s perfect for Ellis and despite her finances, settles in. At night she dreams of Sandie (Anya Taylor-Joy), a golden-haired chanteuse who also dreams of making it big in London. These vivid dreams really sync with Ellie’s retro vibe. Sandie is everything Ellie is not – provocative, and forward, wicked smart, and confident. and soon Ellie embraces those same vibes in her waking life. Sandie falls in with Jack (Matt Smith) who promises to make Sandie a hot commodity, and Ellie struggles to keep pace, dying her hair and investing in expensive retro clothes to go with her portable phonograph and Petula Clark records. A grounding force is her new friend, John (Michael Ajao), whose easy demeanor is charming and a comfort.  There is love and dancing and life is very exciting as both women experience London – Ellie vicariously through Sandie, until the blood and the screams,  and the horrors of being an unescorted woman in 1966 London begins to bleed (you’ll pardon the pun) into Ellie’s waking life.  There’s been a murder and Ellie’s convinced only she can solve, and with the reluctant assistance of John (Michael Ajao), she tries to piece together what happened in that upstairs apartment, as their lives begin to spiral in real-time.

You can practically taste every scene in Last Night in Soho. From the gloss on Sandie’s lips to the cigarette smoke that hangs in the air of the Rialto, this is an immersive experience from frame 1. The beer in the basement pub is bitter, the rain is cold and relentless, and the sheets on Ellie’s rented bed feel stiff and unwelcome. The red neon lights outside of Ellie’s room pulse in towards the audience and you can feel them in the back of your eyeballs. This is a ghost story, and the apparitions are as tangible as the man on the barstool next to you. Ellie isn’t the most stable of individuals and there is an unreality surrounding her day-to-day activities as well as her nightly sojourns into Sandie’s world.  The cinematography creates a duality that allows Ellie to witness from a second-hand view Sandie’s glamourous life as well as experience every touch, drink, and tingle of fear.  Well-paced, it starts as a smart walk through the exhilaration of Ellie’s first successful days in school, and picks up speed through the confusing visions of Sandie’s experiences as the glows of her own dreams grows darker

Last Night in Soho is definitely a film that deserves multiple viewings and it will serve as a glorious tribute to Diana Rigg and Margaret Ann Nolan who both make their final film appearances before their deaths.

Last Night in Soho is streaming now on the following services:
Powered by JustWatch