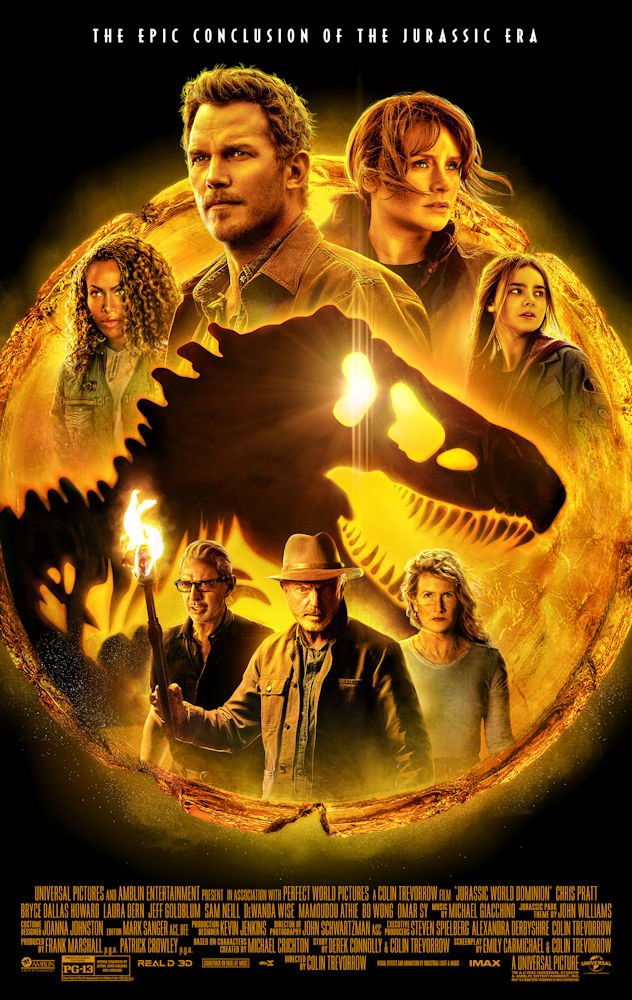 And while we could talk about the dinosaurs roaming the streets of every major city, like maybe the Halszkaraptors squeezing out the modern duck from urban ponds or maybe the Microceratus populating parks in to-the-death battles with raccoons for trash, Jurassic World: Dominion chooses to focus on genetically engineered locusts wiping out small competitor food chain farms to the advantage of BioSyn, this universe’s answer to Big Agriculture and Monsanto.

Grady (Chris Pratt) and Claire (Bryce Dallas Howard) are hiding Maisie (Isabella Sermon) – you remember, she’s Charlotte Powers’ clone from the last movie? – in the mountains. They’re trying to keep her safe and off the grid, but she’s a teenager and does what she wants. In her lust for independence, she’s kidnapped along with Blue’s baby, Beta. Oh hey, Blue spontaneously had a baby due to her monitor lizard DNA, because someone thought that was a good idea. Using CIA contacts who formerly worked at Jurassic Park (nothing like failing up), Claire and Grady hitch a ride to Malta to visit a dinosaur black market, and then to Italy to find Maisie and Beta and teach them the meaning of family.

The contrived meeting between Claire and mercenary pilot, Kayla (DeWanda Wise) in a black market bathroom, is full of cringe and privilege. How do women meet? In the toilet, of course. Pee – the great equalizer.

Meanwhile, Dr. Ellie Sattler (Laura Dern), an empty-nester at loose ends in hormonal overdrive, talks Dr. Alan Grant (Sam Neill) to give up his paleontology gig to steal lab specimens from the largest bio-science company – in Italy. Nothing says maintaining your funding like abandoning your barely funded dig sites. BioSyn, run by an eccentric billionaire (Campbell Scott) with more ego than sense, also happens to be gathering and studying dinosaurs for future breakthroughs in pharmacology, because how could that go terribly and ethically wrong? We’ve already had five movies about this.

Add Dr. Ian Malcolm (Jeff Goldblum) and they’re totally getting the band back together! The characters from Trilogy 1 then meet the characters from Trilogy 2, and they not only have to escape the egomaniac, but a lot more dinosaurs than we’ve been introduced to from the first five movies. Each group also now has a Black Ally, Mamoudou Athie and DeWanda Wise, so that’s new. BD Wong makes an appearance as a perpetually-exhausted scientist wearing his grandad’s sweater, who regrets using his brain for making BioSyn money with locusts the size of ferrets. He’s also obsessed with a cloned teenager and her genetic makeup, so that’s not creepy, right?

Jurassic World Dominion is 2 hours and 26 minutes long, and yes, there are majestic dinosaurs and killer raptors and green screens and apex predators. There is also a lot of talking about the food chain and the responsibility of bio-tech to not murder the planet and why can’t we use our powers for Good? It’s heavy-handed, when I just wanted to see a movie about dinosaurs eating people. And about that…

There are not enough scenes of dinosaurs eating people, despite the fact that they are now literally roaming the earth, but there are plenty of scenes of Grady playing traffic cop with deadly omnivores. It’s his only marketable skillset. Alan Grant’s personality is wrapped up in his hat. Ellie is risking an old flame’s life to prove the age difference wasn’t that big a deal. Ian is cosplaying Jeff Goldblum, and Claire is the redhead. You also have to accept that Blue the Raptor completely understands English and gets sassy. There are seven different movies in Jurassic World: Dominion and none of them belong in the same plot.

For a movie that should be about the most successful species the Earth ever had (because it’s in the title) taking over the world and how we should deal with that, Jurassic World: Dominion spends far too much time rehashing old personality conflicts and creating a technological office park that couldn’t catch a cold. Lots of winks and nods to previous Jurassic movies are dropped, which ultimately makes this movie an expensive clip show no one asked for.

For a popcorn movie, you could do a lot worse, but right now as theaters reopen and streaming services unleash their summer hits, you could do so much better. I don’t know when the Jurassic franchise lost its way, but as it rambled along, it picked up some bloat and some bad habits, and I think it’s time for a Jurassic Clan of the Cave Bear.

Jurassic World Dominion is streaming now on the following services:
Powered by JustWatch